From Zelda Dungeon Wiki
Jump to navigation Jump to search
Want an adless experience? Log in or Create an account.
Tingle 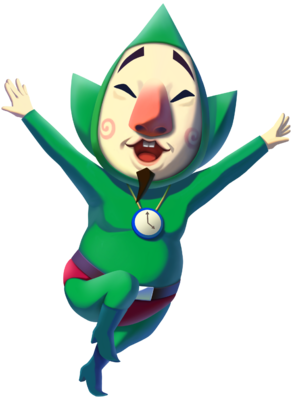 Tingle is a character in five canon The Legend of Zelda series games. He is often depicted as a 35-year-old man who is obsessed with Fairies and Rupees. He is dressed in an unusual, full-body green suit with a clock necklace. He is quite unpopular in North America; however, the opposite is true in Japan, where his popularity has scored him four of his own spin-off games, such as Tingle's Rosy Rupeeland. He is known for his catchphrase (don't use it without his permission!) "Tingle Tingle Kooloo Limpah!"

Tingle made his The Legend of Zelda debut in the second of the two Nintendo 64 Zelda games, Majora's Mask. He can be found floating around certain areas of Termina by balloon, designing maps of the world's main areas. If Link pops Tingle's balloon, he can talk to Tingle, at which point Tingle notes how similar their "fairy costumes" are. Link can purchase maps from Tingle of specific areas, his prices vary from area to area. Tingle is actually the son of the guide at the Swamp Tourist Center, if Link brings him a Pictograph of Tingle, he'll reward him with a Piece of Heart, as well as showing embarrassment for his son's behavior.

Tingle is a man who believes himself to be a reincarnated fairy. He lives off near the sea and is referred to as a weird guy by some of the citizens of Labrynna.[1] He specializes in creating maps and charts used for navigation, but is truly fascinated with fairies and magic.

Link will encounter Tingle, who is floating above a stump, high upon some cliffs in the Forest of Time, located south-east of Lynna City. At first, Link cannot scale the cliffs alone. It will be later, after completing the Wing Dungeon, that Link will meet up with the boxing kangaroo, Ricky, around this same area. After finding Ricky's lost Boxing Gloves, Link will get to ride in Ricky's pouch.

Ricky's special ability allows him to scale the cliffs to get to Tingle, who will give Link an Island Chart which he needs to sail to Crescent Island. Later in his adventure, after obtaining the Seed Shooter, Link can once again visit Tingle and have his Seed Satchel upgraded. At this point, Link will not need Ricky's assistance in scaling the cliffs, as he will have enough items to help him do so. Tingle will upgrade Link's seed satchel to hold up to 50 different seeds of each kind. 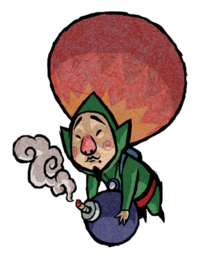 In The Wind Waker, Tingle is first seen imprisoned in the jail at Windfall Island. After freeing him, Tingle will give Link the Tingle Tuner.

Link is also given a map to Tingle Island as well as the IN-credible Chart which shows the locations of the Triforce Charts. Link must eventually seek Tingle's services to decipher the Triforce charts for 398 Rupees each.

In this game Tingle also has two brothers and a "friend" who dresses the same as he does. His younger brother Ankle can be found working on Tingle Island, his outfit is identical to Tingle's except Ankle is dressed in pink.

Tingle's older brother Knuckle, who wears a light blue Tingle suit, lives on Outset Island, but he can only be found by players using the Tingle Tuner, after finding him Knuckle will appear on Tingle Island.

In Four Swords Adventures, when the Links cannot collect Force Gems fast enough, Tingle will fly in on his red balloon and snatch them up. If playing multiplayer mode, in each Hyrulean Adventure level there is a Tingle Tower, where eight minigames are available to play.

In The Minish Cap, Link can find Tingle in South Hyrule Field just east of his house. Link can only reach Tingle after acquiring the Cane of Pacci from the Cave of Flames. Once the Cane of Pacci has been retrieved, Link can use it on a nearby hole to reach the higher platform that Tingle is on. Like in previous games, Tingle will note Link's green cap and clothes, thinking that he might be a fairy. He wants to fuse Kinstones and states that he has also given Kinstones to his brothers[2]

Tingle's Rosy Rupeeland is the first game in the Tingle series, released in Japan and Europe.

Tingle's Balloon Trip of Love is the sequel to Tingle's Rosy Rupeeland. 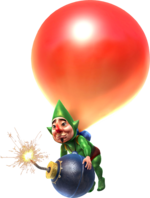 "A balloon is this magical man's main weapon, and he uses it to bounce, float, and launch himself across the battlefield."