From Zelda Dungeon Wiki
Jump to navigation Jump to search
Want an adless experience? Log in or Create an account.
Shikashi 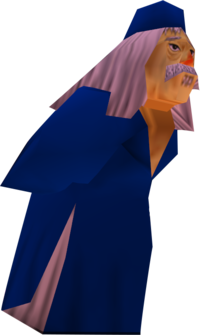 Shikashi is a character from Ocarina of Time and Majora's Mask.

Unnamed in Ocarina of Time, this old man lives in Hyrule Castle Town walking around during the day. Shikashi tells Link a story about the Legend of the Shadow Folk, the Sheikahs who swore allegiance to the King of Hyrule and protected the Royal Family of Hyrule.[1] Furthermore, when Ganondorf's subjugation of Hyrule and the devastated Hyrule Castle Town take place, he moves in to Kakariko Village to live in. When Link talks to him there, Shikashi tells Link a story about the man who could see the truth who lived at the exact same spot where the well is.[2] During the night, he can be found in Mamamu Yan's house, and there he tells Link about the Cursed Rich Family, who got cursed due to their greed.[3]

In Majora's Mask, Professor Shikashi maintains the Astral Observatory in Termina Field. Inside, he possesses a Moon's Tear kept in a glassed case on a stand. He tells Link that the menacing Skull Kid has been messing with him and threatened him by saying that he will break his instruments and steal his Moon's Tear.[4][5]