From Zelda Dungeon Wiki
Jump to navigation Jump to search
Want an adless experience? Log in or Create an account.
Sakon 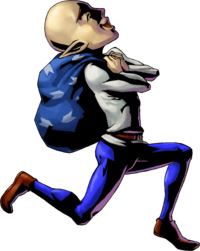 Sakon is a character in Ocarina of Time and Majora's Mask. He is a thief who keeps stolen goods in his hideout. Sakon skips everywhere, is bald and always wears strangely plain clothing.

Sakon's counterpart in Ocarina of Time is known as the Man Carrying Sack and can be seen running around in Castle Town.

"I'm not doing anything suspicious.. Really!"

Sakon plays a much larger role in this game than he does in Ocarina of Time. On the Night of the First Day, Sakon attempts to steal a bag of Bombs from the Old Lady from Bomb Shop. If Link slices at the bag instead of striking it with a projectile, it causes Sakon to eventually drop the bag and Link is given the Blast Mask by the Old Lady as a token of gratitude.

Sakon plays an integral role in the Anju and Kafei quest, serving as a sort of antagonist.

Kafei and Anju are nearing their wedding day, but the Skull Kid (under the influence of Majora) cursed Kafei so that he appears as a mere child. Seeking to be cleansed of this curse, Kafei travels to the Great Fairy in North Clock Town. Unfortunately, he gets one-half of the Couple's Mask, the Sun's Mask, stolen from him by Sakon. The other half is the Moon's Mask, which Anju possesses.

Not being able to face his love without the mask, the Man from Curiosity Shop allows Kafei to live in the Back Room of the Curiosity Shop near the Laundry Pool. Kafei uses his time to spy on the customers of the shop, hoping eventually that he'll catch Sakon there and follow him back to his base in Ikana Canyon. Eventually Kafei does spot Sakon and follows him, urging Link to meet him in Ikana Canyon on the Night of the Final Day.

Sakon sets up a complex security system to stop Link and Kafei from obtaining the Sun's Mask in the hideout. If the two are successful in retrieving the mask, all is well and the Sun's Mask and Moon's Mask unite to form the Couple's Mask.