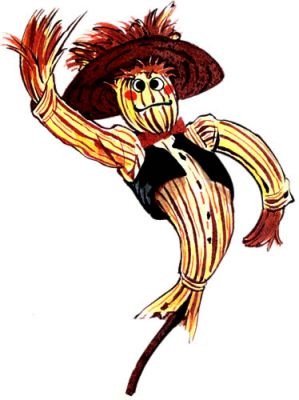 Pierre is a scarecrow who appears in Ocarina of Time and Majora's Mask.

Pierre lives on the shores of Lake Hylia, slightly northeast of his friend Bonooru. Link first meets him as a child, where he admits that he loves music and wishes to travel around in search of good tunes.[1] If Link uses his ocarina in front of Pierre, he will dance to any song he plays and then repeat it, congratulating him.[2] He tells Link to return if he has any other songs.[3] Unlike with Bonooru's song, this can be more than eight notes.

Later, when Link becomes an adult, he can return to Lake Hylia to find Pierre missing. Bonooru will ask him to play the song he played seven years earlier. When Link does so, the scarecrow is impressed and explains that Pierre is wandering around.[4] Boonoru assures Link that if he plays the Scarecrow's Song, Pierre will appear to help him if he is nearby.[5] Link can Hookshot to Pierre to reach places that he normally would not have been able to reach. Navi turns green and hovers over areas where Pierre can appear.

Pierre can be found on the first floor of the Observatory and in the Trading Post in West Clock Town. When Link talks to him, he can teach him the Scarecrow's Song, which works the same way as in Ocarina of Time. The song cannot include the notes that are used for the songs that are vital to Link's quest. Pierre remembers this song throughout the whole three day cycle, but upon Link's return to the past, Pierre forgets it and Link must teach it to him once again. After making up a song to use, it can then be used to help Link reach areas that he cannot get to normally. To do this, Link will see Tatl fly off and turn blue at certain areas. Link can then play the Scarecrow's Song thus making a scarecrow appear where Tatl was located. Link can use his Hookshot afterwards on the scarecrow and bring himself to its location.

Pierre is the one who tells Link about the different ways to play the Song of Time in order to alter the flow of time differently than just going backward in time. By playing the Inverted Song of Time, which is the notes played backwards, Link can slow down time which is very useful since he has a limited amount of time. With the Song of Double Time, which is the first three notes of the song played twice, Link can travel forward in time by 12 hours. Pierre has the same effect as this version of the Song of Time and it can be activated when and if Link decides to dance with him.