From Zelda Dungeon Wiki
Jump to navigation Jump to search
Want an adless experience? Log in or Create an account.
Navi 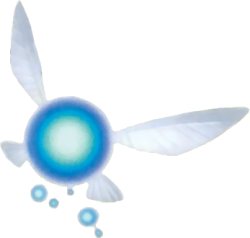 Navi is Link's Fairy companion throughout his journey in Ocarina of Time.

Navi helps Link by giving him hints and advice on what to do or where to go, as well as acting as his Z-button target mechanism. She has annoyed many players with her constant cries of "Hey!", "Listen!", "Look!", and "Watch out!" She will often fly over to nearby secrets and change colors to alert Link of something suspicious. This often leads to tricks where Link can play certain songs on his Ocarina. During battle, when Link is able to target a boss or enemy, he can talk to Navi to get information on the particular monster, sometimes learning valuable hints.

She was summoned by the Great Deku Tree at the beginning of the game to act as Link's fairy partner and bring the young boy to him. After the events that transpired Inside the Deku Tree, Navi leaves Kokiri Forest with Link to help him on his adventure. She initially sees Link as a lazy child, doubting that he can really be the Hero Hyrule needs. However, as Link's journey progresses, the two grow to be very close.

Once Link ascends Ganon's Castle and confronts Ganondorf, Ganondorf's aura of evil is so strong that Navi is prevented from helping Link during the first stage of the battle. When Ganondorf transforms into his monstrous Ganon form, Navi is determined not to let him hold her back and is able to assist Link in the final showdown.

At the end of Ocarina of Time, Navi flies away from Link after he places the Master Sword in the Pedestal of Time.

Link leaves Hyrule to travel in "search of a beloved and invaluable friend...with whom he parted ways when he finally fulfilled his heroic destiny and took his place among legends"[1]. Between the text and the use of Navi's flying sound effect, it is implied that Navi is who he is searching for. This leads to his encounter with Skull Kid and adventure in Termina.

In the intro to Land of Myth, a fairy pleads for Impa and Sheik's aid to calm Darunia. While it is not explicitly stated, it is implied that she is Navi.