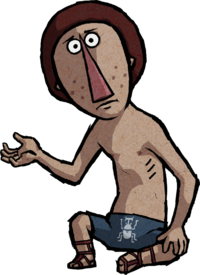 Beedle artwork from The Wind Waker

Beedle is a shop owner who has appeared in several games in The Legend of Zelda series. In the games he appears in, Beedle appears to be somewhat young.

Beedle first appears in The Wind Waker and is met as a traveling merchant who sails the Great Sea on his boat, Beedle's Shop Ship, where he sells items. He also has a shop where you can buy rare items like a Piece of Heart, or a Bottle. The items here are very expensive. Link can purchase items from Beedle who will keep track of how many items Link buys and award him with points. These points accumulate with each purchase Link makes and eventually add up to give him small discounts and rewards in the shop. He says "OH!" whenever talked to, he says "Thank You!" whenever you buy items from him, and he says "Bye!" whenever you leave.

In The Minish Cap, Beedle is found in the center of Hyrule Town. He appears after the Gust Jar is used to "clean up" dust off of one of the mats in the town. This version of Beedle sells a magical item known as "Picolyte"— an item which grants the user a different magical effect depending on the color.[1]

Beedle is reincarnated as a shop owner once again in Phantom Hourglass. On his ship, he travels around the World of the Ocean King, selling his wares. He has five items for sale at all times, which can consist of Ship Parts, potions, and rare Treasure which are of course sold for Rupees. At one point in the game, Beedle is wearing a golden mask and is selling a yellow potion, a Heart Container, and a Treasure Chart, all of which are very expensive, costing over 900 Rupees each. Like the Beedle in The Wind Waker, Link can gain points for buying things at his shop.

Beedle in Spirit Tracks is much like the Beedle in Phantom Hourglass; however, the Spirit Tracks Beedle is in a hot air balloon. He will sell Bombs, Potions, and Treasures to you. The first time you visit his hot air balloon he will sell you the Bomb Bag. To visit his shop, Link must drive up to him and blow the Spirit Trains whistle, and then he will stop for Link. Much like in Phantom Hourglass and The Wind Waker, Beedle gives membership points. Link gains one point for every ten rupees spent. After Link has acquired 500 points, he is awarded a Heart Container. Additionally, if Link takes a boy in Aboda Village to his Beedle's shop, the boy will give Link a Force Gem.

Like his previous incarnations, Beedle is a shop owner and sells a wide variety of very useful items, only this time, he sets up business in a floating wooden shop. In Skyward Sword, Beedle has a taller and leaner physique and is wearing different clothes than in other games. After hitting the bell on the bottom of the shop with the Slingshot, Bow, Beetle, or Clawshots, Link can grab onto a rope and be pulled up to the shop via a pulley mechanism. The inside of Beedle's shop is covered in large gears, which Beedle keeps spinning by powering bicycle-like machine. His shop carries four items at a time. He sells a Life Medal, a Bug Medal, the Bug Net, a Piece of Heart, three Extra Wallets, and three slots for the Adventure Pouch. His familiar "OH!" sound effect has been carried over from The Wind Waker. If Link leaves after looking at an item but without buying anything, Beedle complains that he works hard to keep his shop afloat, and that his effort shouldn't be wasted on him. He then drops Link out of a hatch. Also, if Link sleeps in the "bed" on Beedle's floating shop until night, he will wake up on an island located in a different place in the Sky known as Beedle's Island. This is the place where Beedle lands his ship every night and leaves from the next morning/day. At a later point in the game, Link can do a side quest with Beedle that involves getting his special bug back. The rewards for the quest are five gratitude crystals and a discount on one of Beedle's items.

Beedle appears once more in Breath of the Wild. He can be found at many of the Stables across Hyrule, where he sells a variety of items, changing from location to location. He will also offer to buy many of Link's items, including Materials, Armor and Food. If Link approaches him whilst any type of Beetle is in his inventory, Beedle will be incredibly surprised, and offer to trade one of his wares for the insect[citation needed].