From Zelda Dungeon Wiki
Jump to navigation Jump to search
Want an adless experience? Log in or Create an account.
Zuko 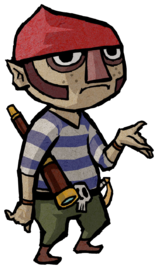 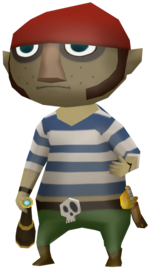 Zuko is one of Tetra's Pirates in The Wind Waker. He also makes a short appearance at the beginning and end of Phantom Hourglass.

Zuko appears in The Wind Waker as a member of Tetra's crew, and is also quite short. He has a red hat, very large sideburns, a blue and white horizontal striped shirt, green pants, and a skull buckle. He keeps watch, and uses his Telescope, which resembles Link's, to do so. He rarely speaks during the course of the game.

Zuko looks identical to one of the men in the painting in Hyrule Castle, which depicts the members of the royal family. It is heavily implied that the man in the painting is Zuko's ancestor, who once served a previous Princess Zelda.

Zuko can be found at the very top of the tower, as a lookout. If Link climbs up to talk to him, Zuko quickly dismisses him, telling Link to get out of there.[1] He is on the lookout for the Forsaken Fortress and tells Link he will inform him when they are close.[2]

During the beginning of the game, he can be seen with the rest of Tetra's crew, and he is looking through his telescope. He spots the Ghost Ship after the fog comes in, and informs Tetra of his discovery. During the end of the game, when Tetra's crew comes to rescue Tetra and Link, Zuko can be seen, along with the other pirates.