From Zelda Dungeon Wiki
Jump to navigation Jump to search
Want an adless experience? Log in or Create an account.
Island Chief 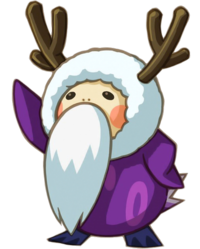 Link first visits the chief to ask about the Pure Metal, the Azurine. The chief then explains that if Link helps him find the Yook that sneaked into their village and impersonated one of their members, only then he would help him obtain the Pure Metal.[1][2] After Link discovers the Imposter Yook disguised as Aroo in Anouki Estates, the Chief allows him to go into the Great Ice Field, which has access to the Temple of Ice and the Azurine.[3]