From Zelda Dungeon Wiki
Jump to navigation Jump to search
Want an adless experience? Log in or Create an account.
Isle of Frost 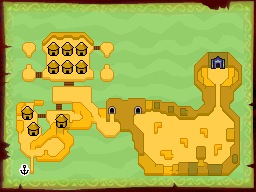 The Isle of Frost is an island in the southeast quadrant of the World of the Ocean King in Phantom Hourglass. It is the home of the Anouki and the Yook, as well as the resting place of the Azurine and the Temple of Ice. Due to the thick wall of ice encompassing the island, the cannon on the S.S. Linebeck must be used to break the barrier and board.

Link travels to the island during his quest to find the Pure Metals. In order to dock at the island, he must first destroy the large pillars of ice that surround it with the cannon. He then speaks with the Island Chief, who tells him that a Yook has disturbed the peace and broken their agreement by kidnapping a villager in Anouki Estates and impersonating them. Link talks to each of the Anouki and discovers that the Yook is disguised as Aroo. The chief then lets him go to the eastern part of the isle to find the Azurine.

After traversing through a short cave that holds a stone tablet hinting at the Yooks weakness to bombs, Link enters the Great Ice Field and finds many Yooks trying to attack him. If he defeats them all, he can finally enter the Temple of Ice, where the Pure Metal is being held by Gleeok.

Once he gets the Pure Metal, the Yooks return to normal and are much more friendly, since they were being controlled by an evil force. Aroo also returns to his home in Anouki Estates.