From Zelda Dungeon Wiki
Jump to navigation Jump to search
Want an adless experience? Log in or Create an account.
Molida Island 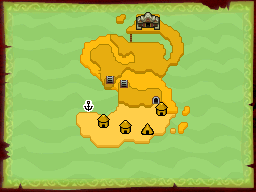 Molida Island is an island from Phantom Hourglass where numerous of the villagers live. The third dungeon of the game, the Temple of Courage lies in north of the island. There are two huts where fishermen and a family lives. Inside the huts, a treasure and few jars can be found. The wives and the children fear that the Ghost Ship and other sea monsters have abducted the fishermen. Romano's house is located in the far east part of the island. After completing the Temple of Courage, Romanos allows Link to play in his Shooting Gallery for 20 Rupees, where Link can win several prizes. After obtaining the Sun Key, Link gets access to a new part of the island by opening the locked door inside a cavern, which can only be reached via the Old Wayfarer's second hideout. After directing all three lasers on the temple's door, Link can enter the third dungeon.