Below is a complete guide for the Fishing Pond in Ocarina of Time. This includes a guide on how to collect the Piece of Heart, Golden Scale, and the elusive Hylian Loach. 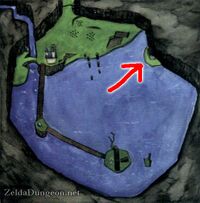 The Fishing Hole is found in the north-eastern area of Lake Hylia. As a child, Link can reach it as soon as he leaves Kokiri Forest. As an adult, while the Lake Hylia is drained, he'll need the Hookshot and the Scarecrow's Song to reach the entrance, or he must have planted the Magic Bean. Later on, once Link has cleared the Water Temple, the water level of the lake will rise, allowing him to just swim over to the Fishing Pond again.

After paying 20 Rupees to the Fishing Hole Man, Link can fish for as long as he wants, but will have to return the fishing rod when leaving, and pay again when returning.

After getting the fishing rod from the Fishing Hole Man, aim for the water and press B to cast. You can target the fish to aim directly at them, but you'll have to choose your distance by pressing A and the Control Stick in order to stop it in its tracks.

The general idea is to target a fish, get in a good position, cast with B, then use A + Control Stick to stop the line before it gets too far. When you get near your fish, use a combination of B and the Control Stick to wiggle your lure around. The best way is to wiggle a bit, stop, repeat.

If a different fish than the one you are trying to catch snags your line, just press nothing and the fish will let go. If you miss your target fish or end up going too far, use A + R to reel in quickly and try again.

You can only hold one fish at a time, so hold onto one and keep trying until you're sure you have the biggest one around.

The biggest trick to finding the biggest fish is to realize that each fish starts out in the same place each time you enter the pond. As long as you don't jump in the water and scare them to the deep water, you can easily pick out specific fish.

That being said, the biggest fish can always be found near the arched log, just a little towards the three poles sticking out of the water. Target it once you find it, but be careful not to scare it away!

The best way to catch the largest fish, either as a child or as an adult, is once you walk into the pond, walk to the left around the pond and then carefully make your way so you are standing on top of the arched log near the center of the pond. Cast your line while standing on the arched log, that way once the fish catches on, you don't need to pull it very far at all.

Also, the size of the fish tends to be a little larger than the "record fish" in the tank, so if the "biggest fish" was originally 15 pounds and you caught it, the next one would be around 18 pounds and so on.

Right before the sun sets and rises, little fish come out, causing all the others to go into a frenzy and chase after them. All the fish are very easy to catch at this time. Once they've eaten a little fish, they'll calm down for about 30 seconds before starting up again. After a certain time, the little fish disappear and the frenzy stops.

Now, in some ways, this is the easiest time to fish, but in others, it's also the hardest. It's especially useful for catching the legendary Hylian Loach. But, it's also INCREDIBLY hard to come at the perfect time when, not only are the fish frenzied, but the Loach is there.

Also, it's probably easier to find and catch the biggest fish the regular way, since the little ones won't get in the way and constantly snag your line that way.

After catching a 10-pounder (past) or 13 pounds (future), you'll be able to find the Sinking Lure. It can be found in a few locations but you'll have to find it again every time you leave. It's invisible, so just walk around the following areas until you find it:

Note, you have to go and get the Sinking Lure immediately once you pay to play. If you start fishing or walk around in the pond right when you enter, the Sinking Lure will simply no longer appear. You'll have to leave the Fishing Pond and re-enter to get it. I recommend always checking the shallow stream first, staying against the outer wall. This way you don't scare as many fish to the center of the pond.

After you get the Sinking Lure, catching the really big fish will become a sinch, as all the fish absolutely love this thing. It's especially useful for catching the infamous, Hylian Loach. But sadly all the fish you catch with it are deemed illegal. Unless of course you say pretty please to the Fisherman.

You can keep the fish you catch with the Sinking Lure by talking with the fisherman and choosing "Let's talk about something." After that, go ahead and weigh your fish and he'll let you keep it.

This eel-like fish is very rare and weighs a lot! The prize for getting it is a measly 50 Rupees, but it sure does feel good to know you did it.

As Adult Link there is only one Hylian Loach in the pond. As you enter the pond, the Hylian Loach is located near the back of the left lily pad patch. It will always start there unless you scare it off, at which point it will then travel closer to the center of the pond and start the aforementioned "thwap" cycle.

As an adult you'll notice that the Fisherman is wearing a hat and a new rule has been posted that reads "4. Don't cast at anyone." Now, if you can cast at the Fisherman just right you'll snag his hat and pull it off his head, revealing that he's gone bald in the past 7 years. You can now either give it back, or throw it in the water for which he'll yell at you, then fine you 50 rupees. If you threw it in the water it'll be gone forever and every time you come back it'll still be gone. Now don't you feel bad?