After acquiring the boat sail from Windfall Island, Link can get on top of the King of Red Lions and sail east to Dragon Roost Island. The island is easily noticeable by the tall mountain in its center. 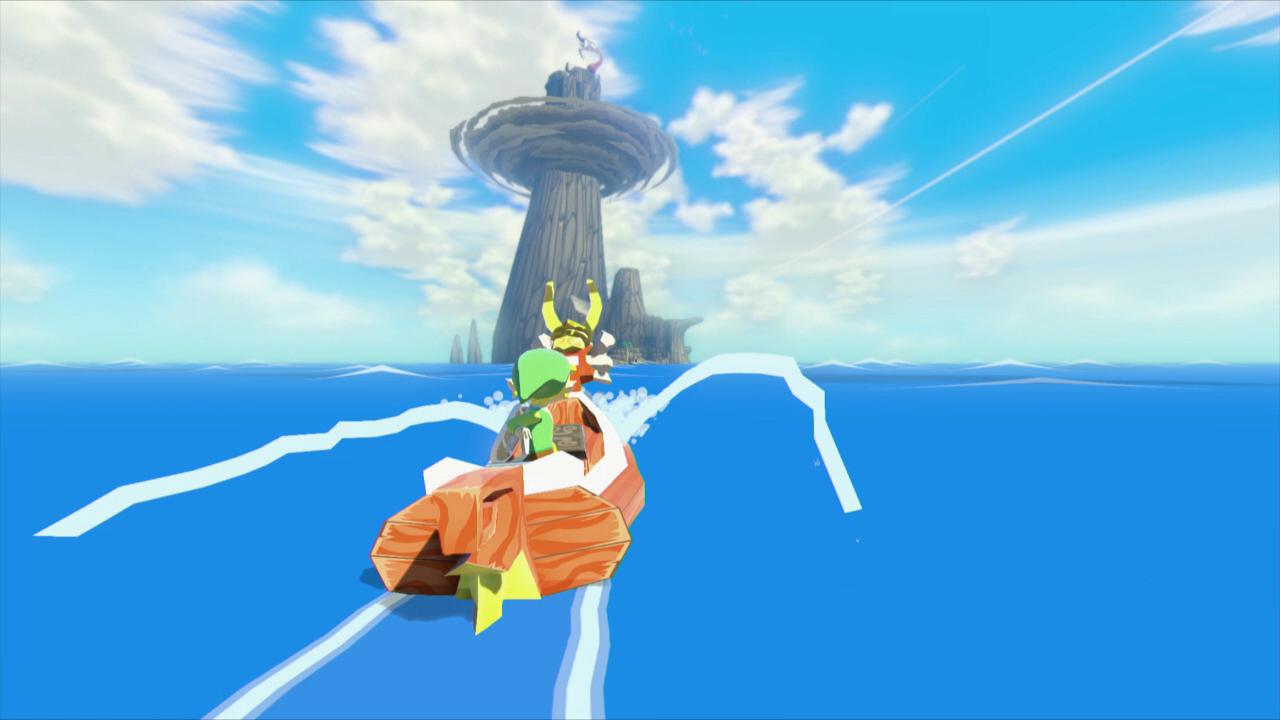 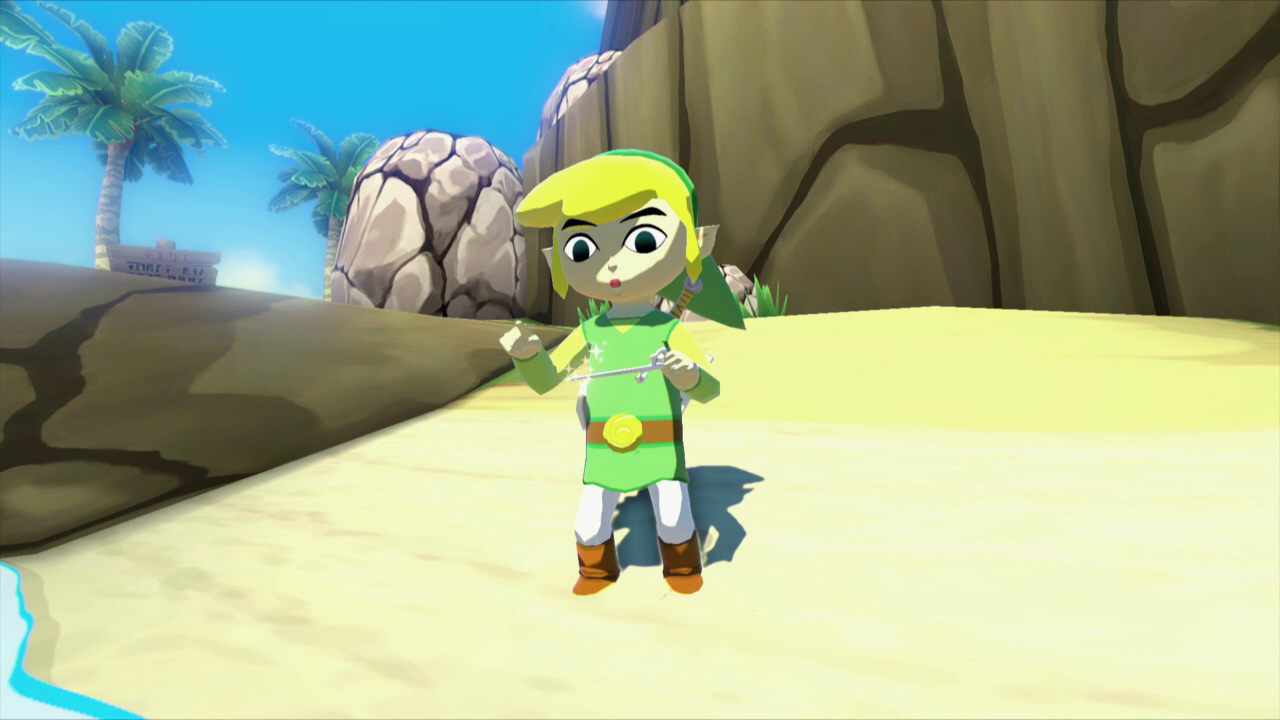 Turn towards the island and you’ll see a rock to the left. Nearby in the grass is a bomb that you can pick up and throw or drop near the bomb. After it explodes it will destroy the rock as well, allowing you to climb higher and higher. 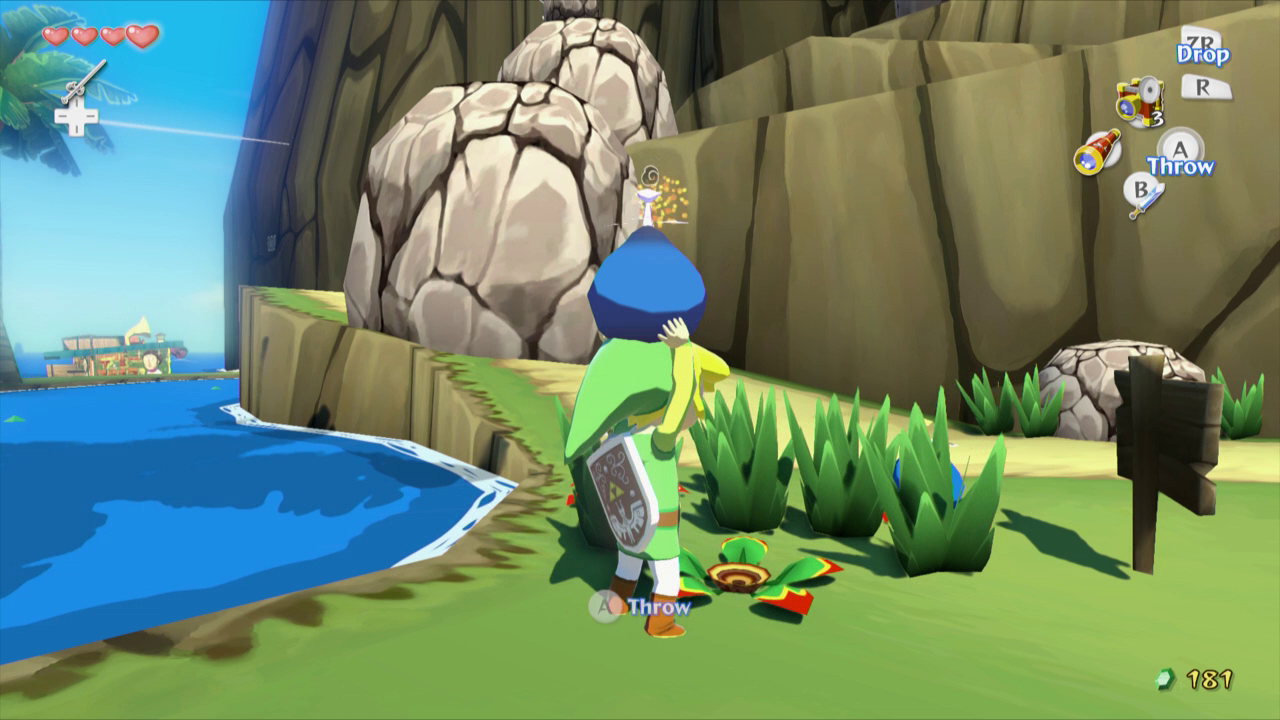 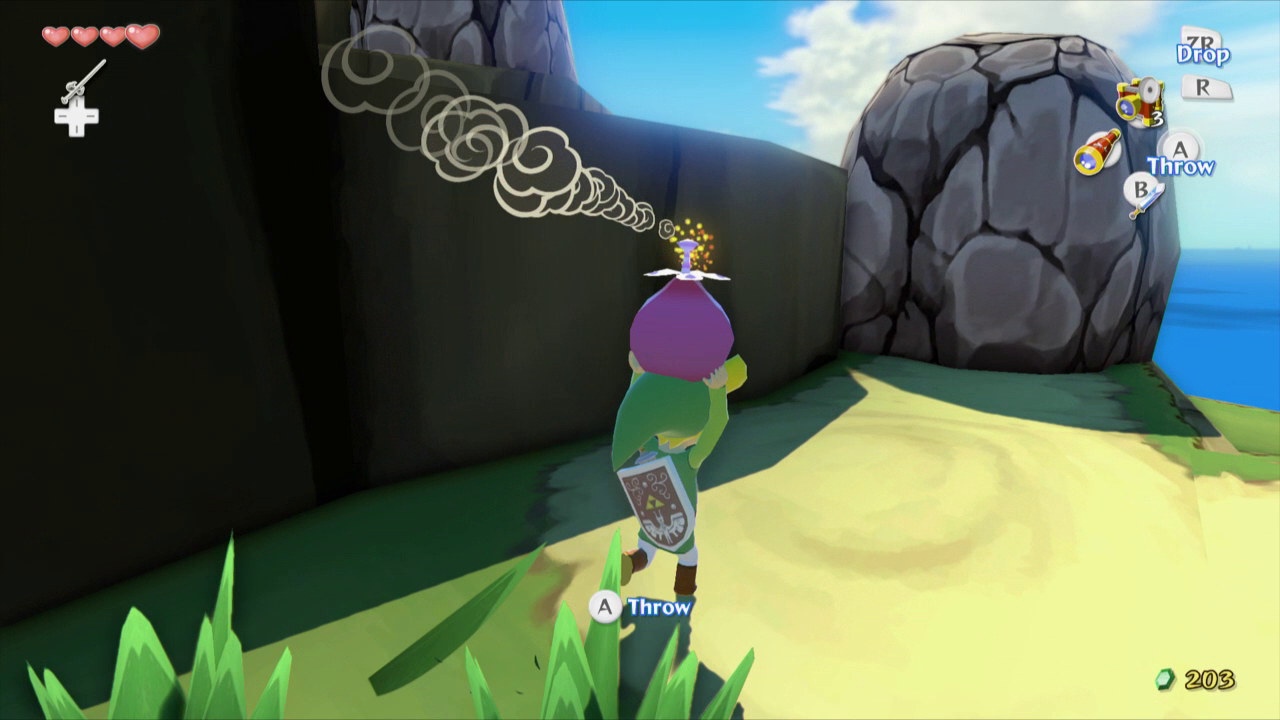 Continue along the path and you will eventually reach a gap that is too large to jump. Sidle across to the other side like in the Forsaken Fortress and then drop down to the lower level. Use a bomb to blow up the rock below the blocks and go through the tunnel on the other side. 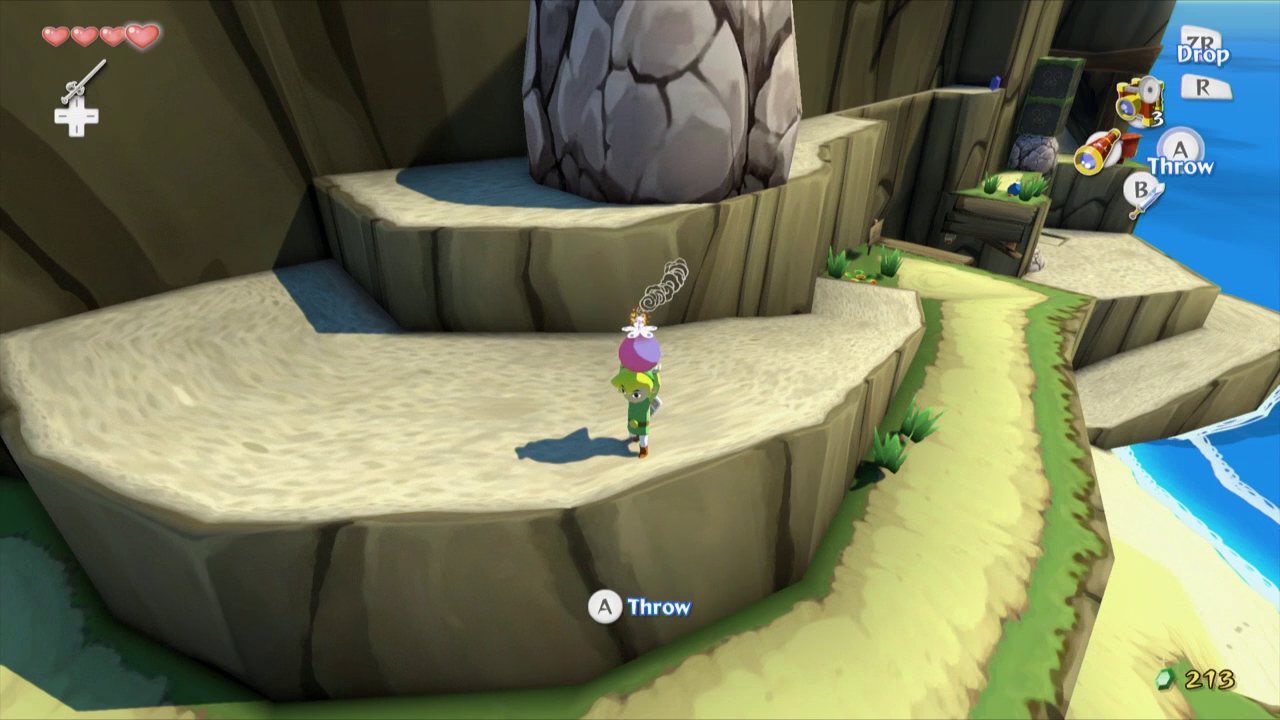 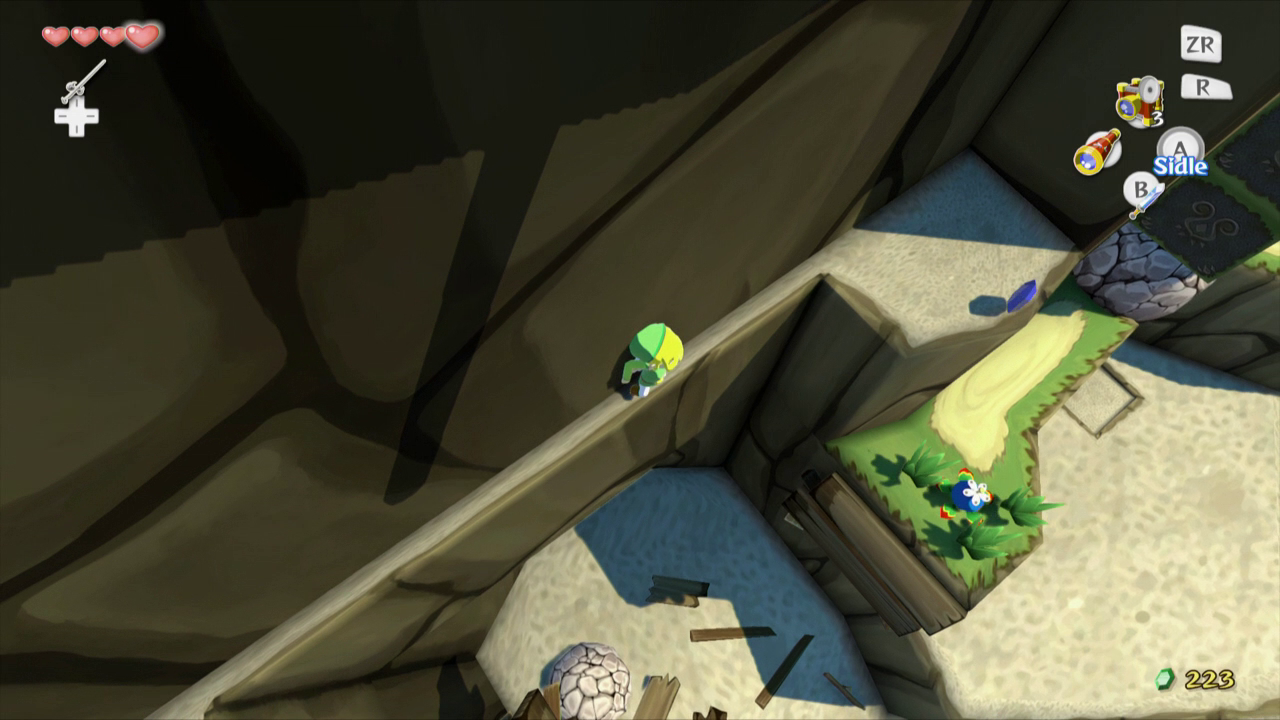 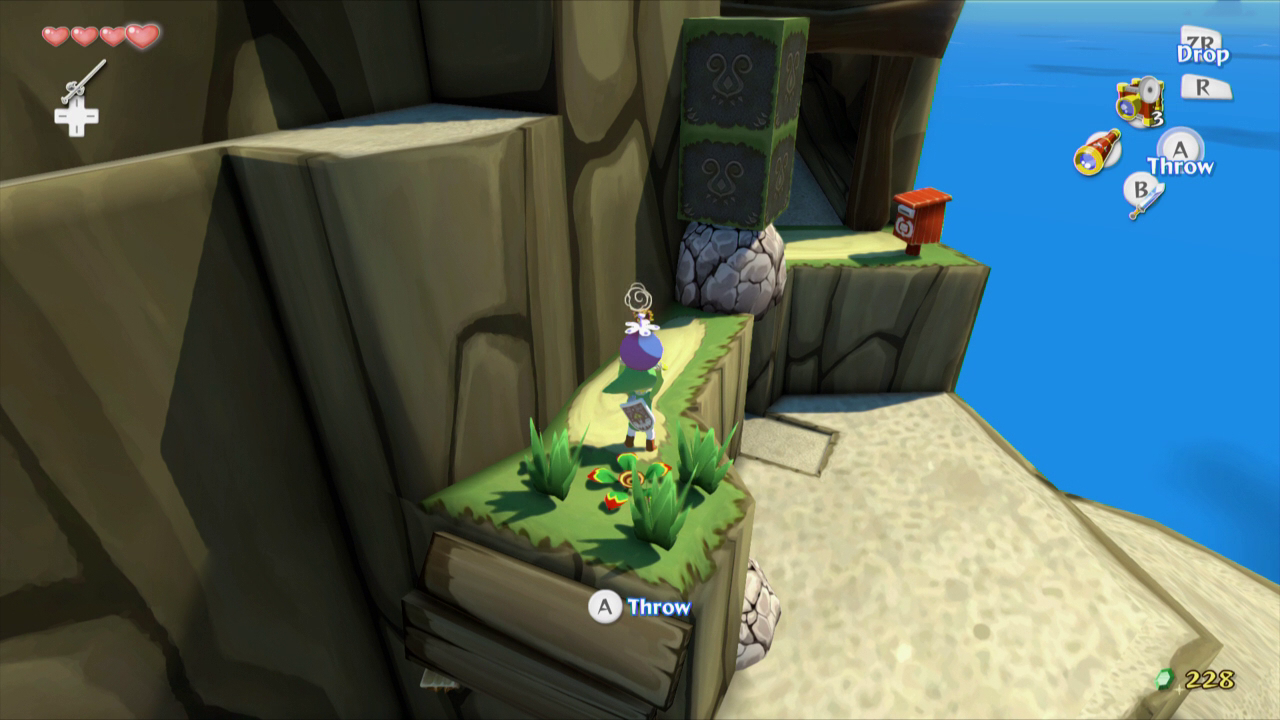 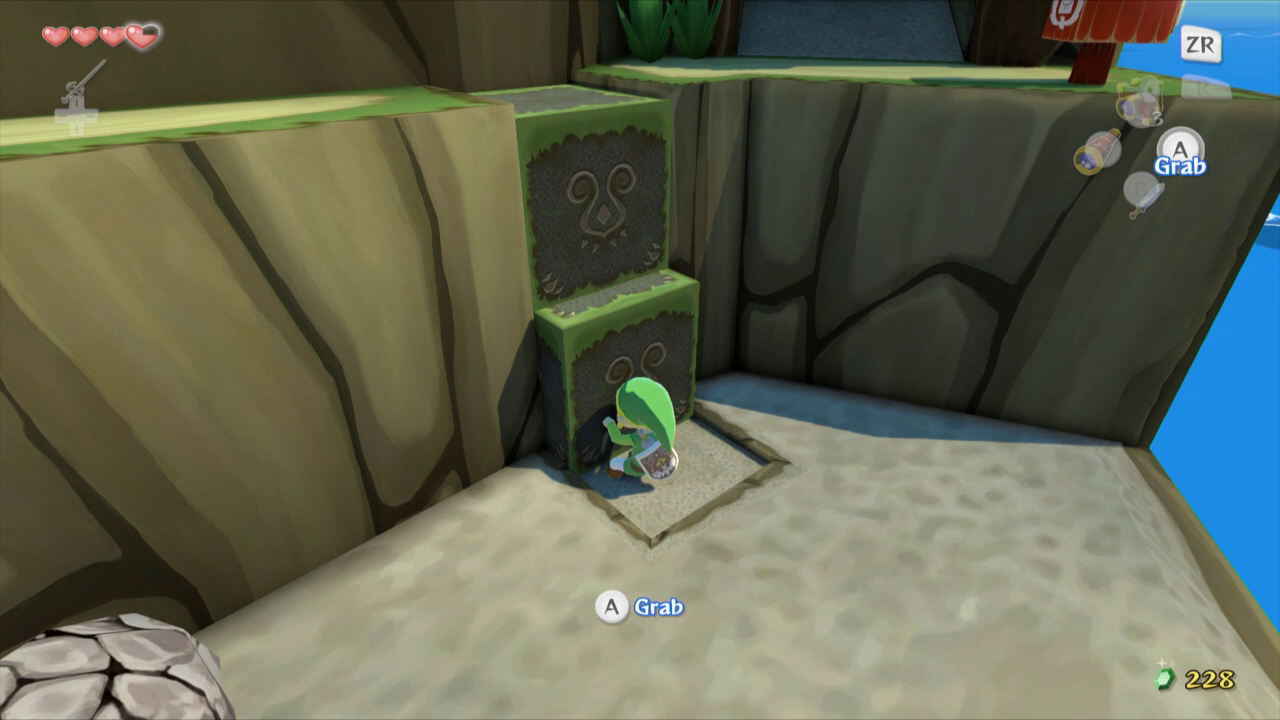 You will find Quill and he’ll tell you he’s impressed that you’ve traveled so far. He’ll offer you help and fly ahead to speak with the Rito Chieftain who is waiting for you inside.

Head up the platform to the left and go inside the doorway at the top. The chieftain will speak with another Rito and offers to help you… after they deal with their own problem first. 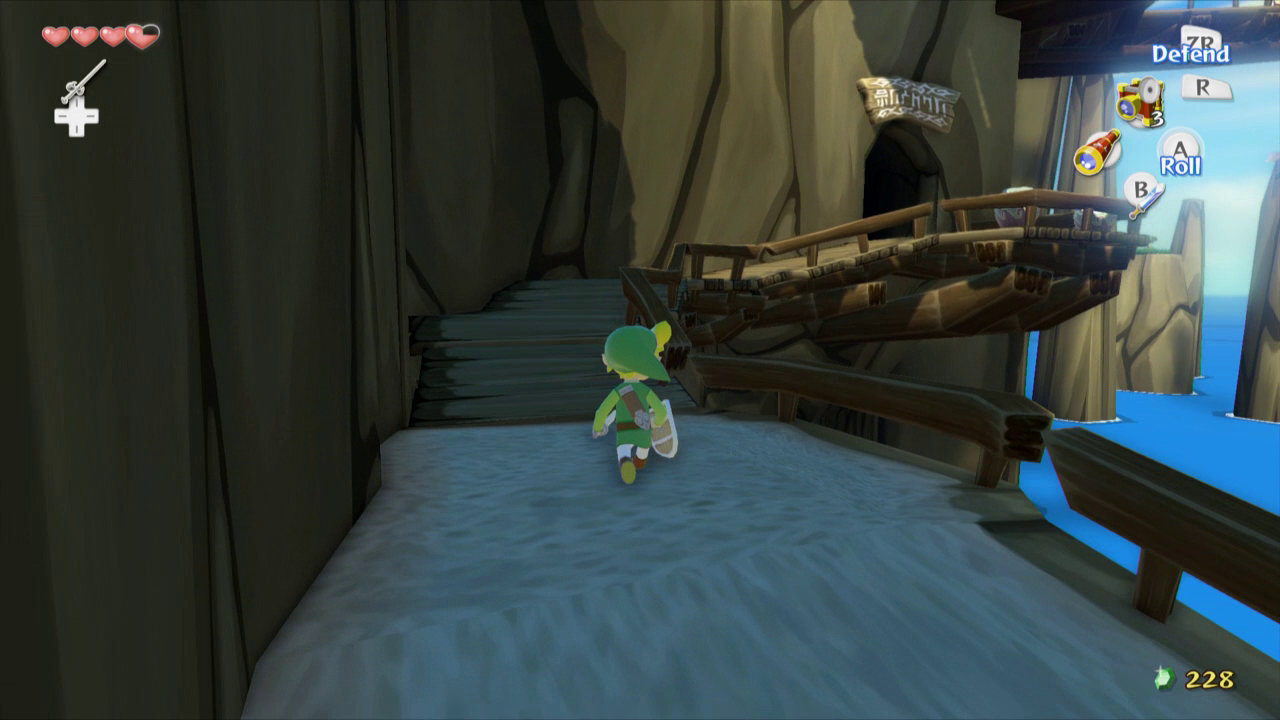 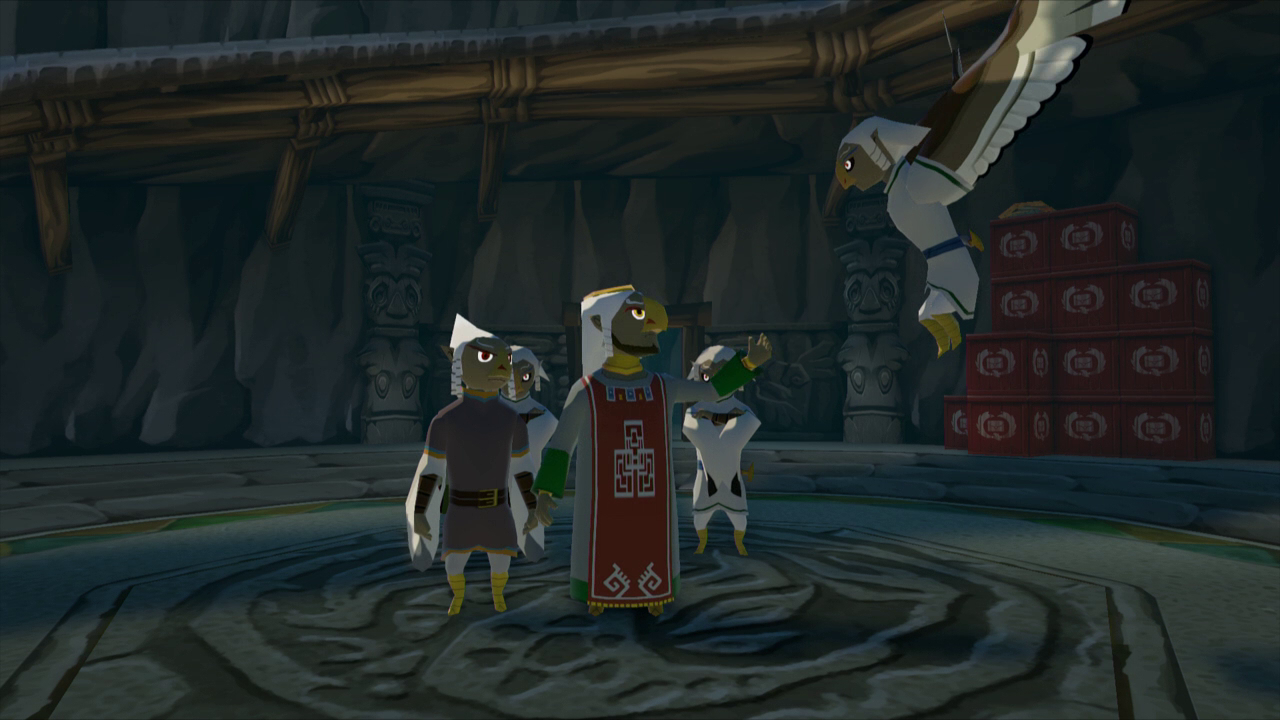 The Chieftain tells you that when a Rito reaches adulthood he or she journeys to the top of Dragon Roost and receives a scale from Valoo which gives them the ability to fly. But lately Valoo has become violent and unpredictable, making it impossible to approach him.

He asks you to meet his son so that they can deal with their problem and help you. The chieftain then departs and Quill approaches you, giving you the Delivery Bag. Head up the ramp on the left and go into the first room to the left. Speak with Medli, the girl inside. She is studying to be an attendant to Valoo and gives you the “Father’s Letter” to give to Prince Komali. Medli will also ask you to meet her at the entrance to Dragon Roost later after you have given the letter to the Prince. Head back down the ramp, through the hallway and enter the doorway to the left. Enter the door at the end of that hallway to speak with Prince Komali. 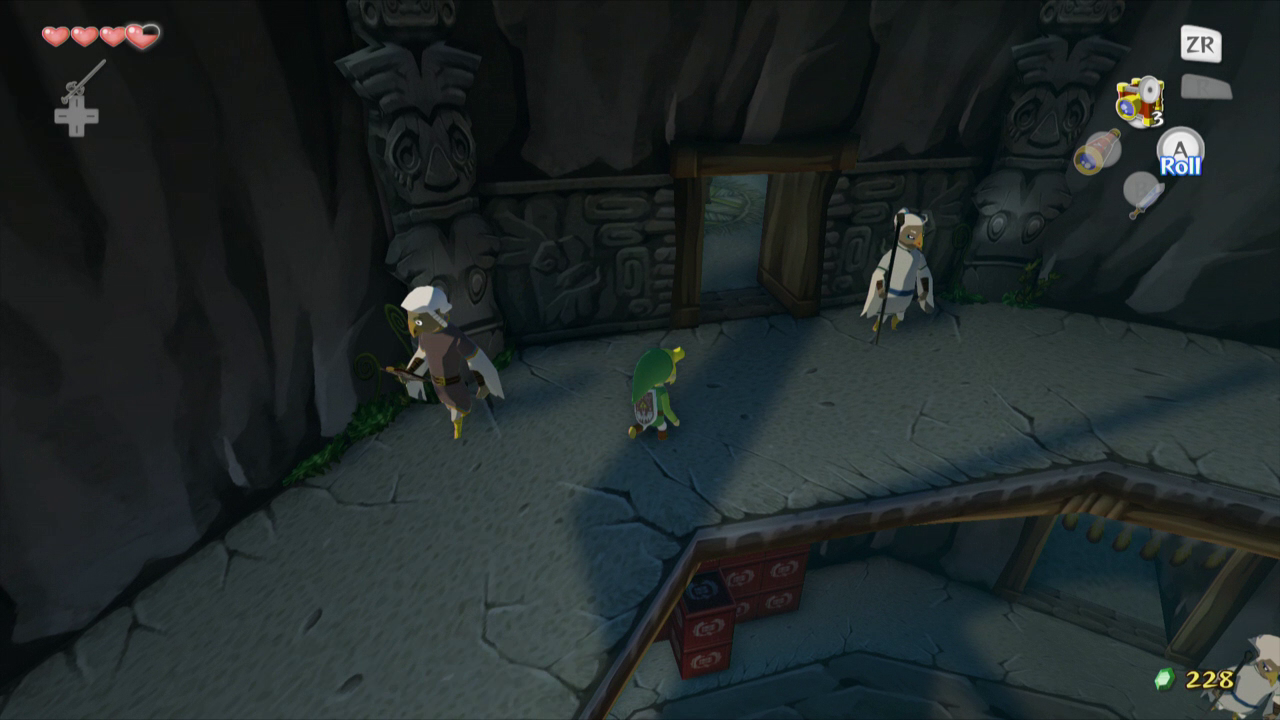 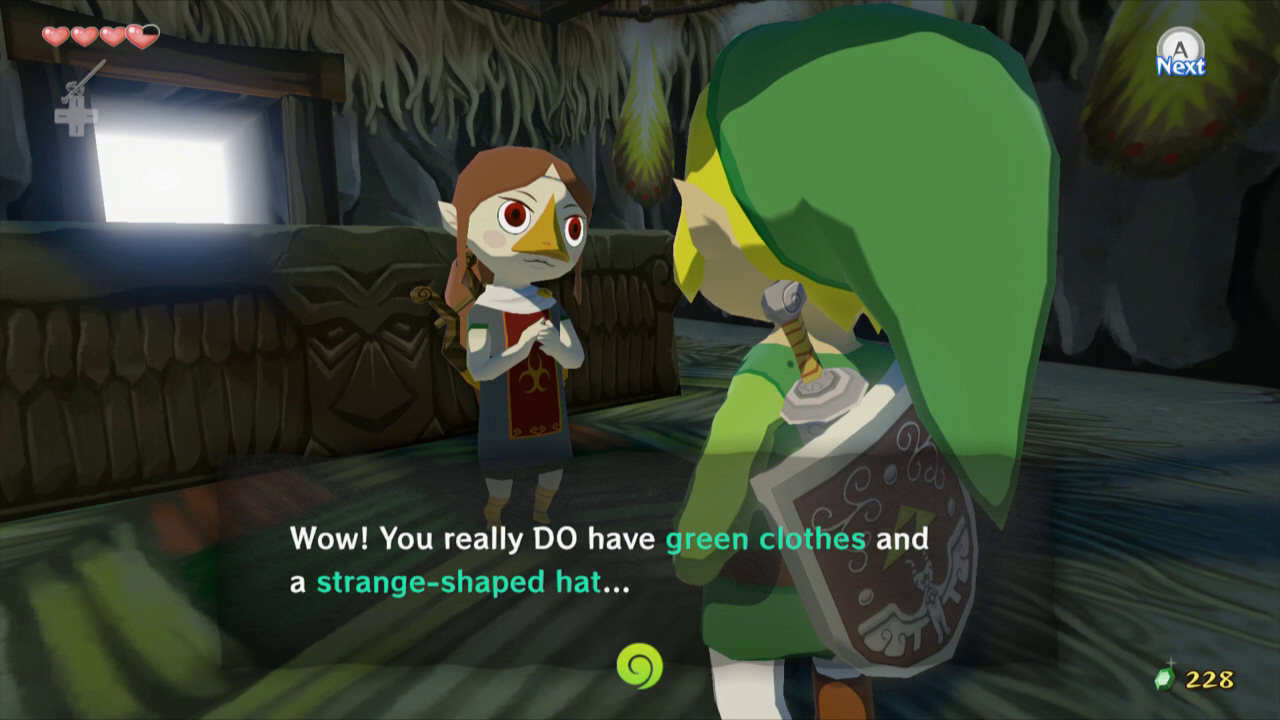 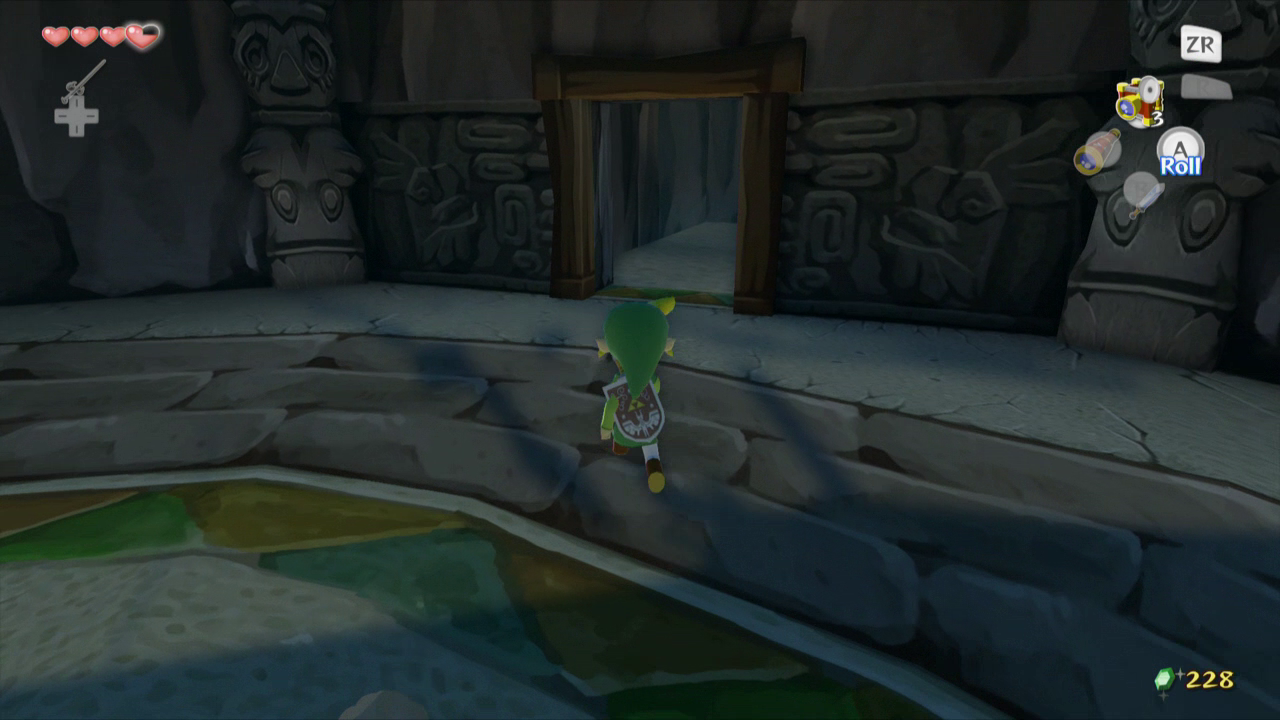 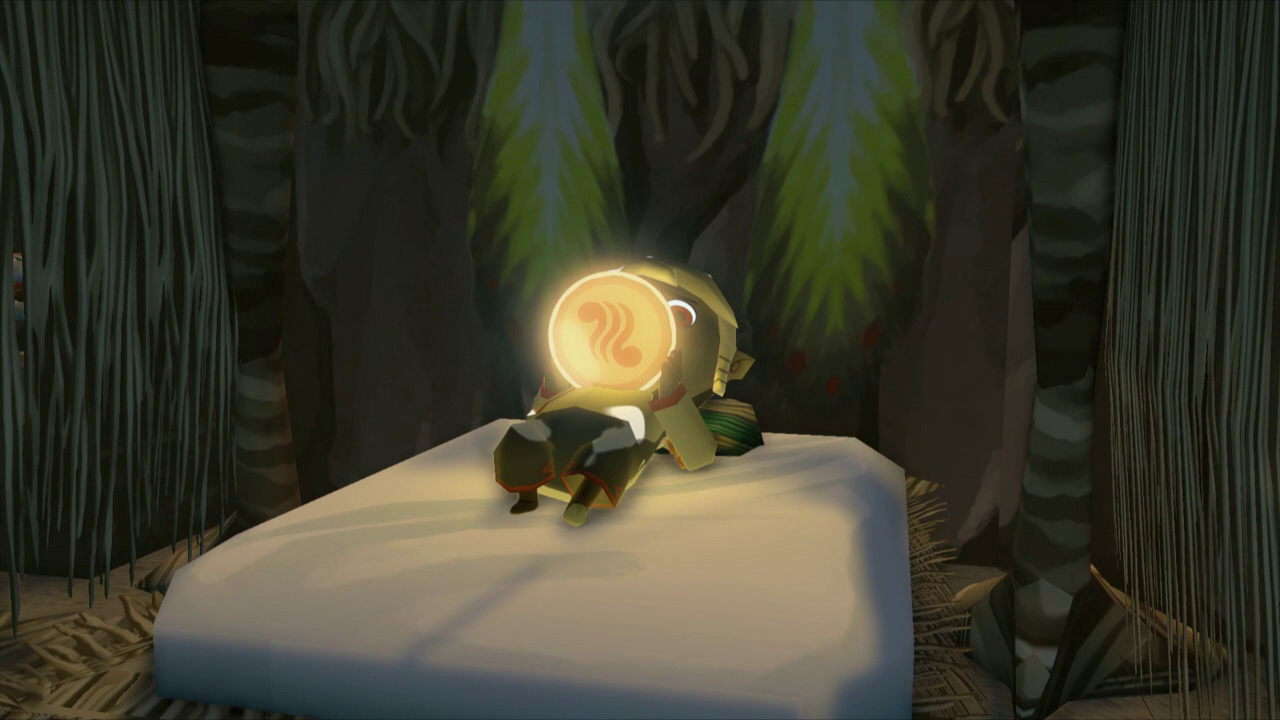 Once you are in his room, open the Delivery Bag and equip the Letter, then give it to Komali. He will get mad at you for being a nosy person and tells you that if you manage to calm down Valoo he’ll do anything you say.

Head back to the upper level and walk past the room with Medli to find Koboli, the Rito in charge of the mail. Speak with him and he’ll tell you he’s looking for someone to help part-time in sorting the letters. Tell him you are there to help and he’ll ask you to sort letters for him, rewarding you with rupees for every letter you sort. 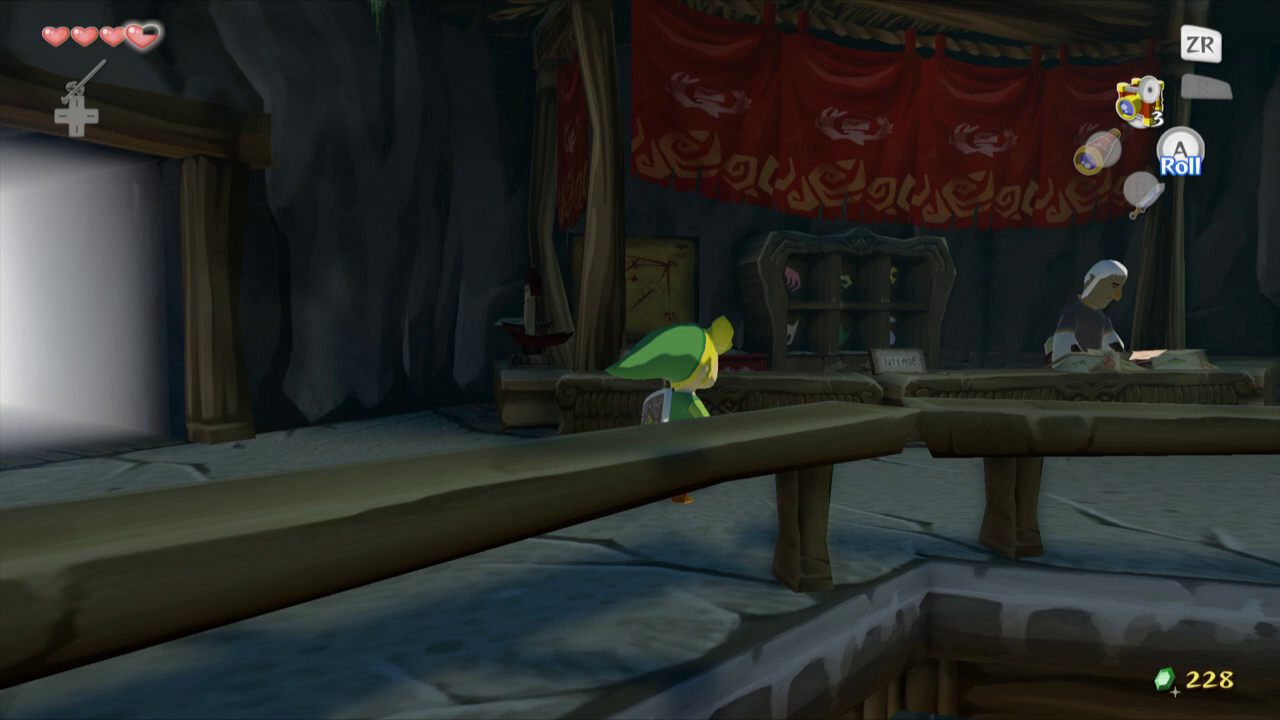 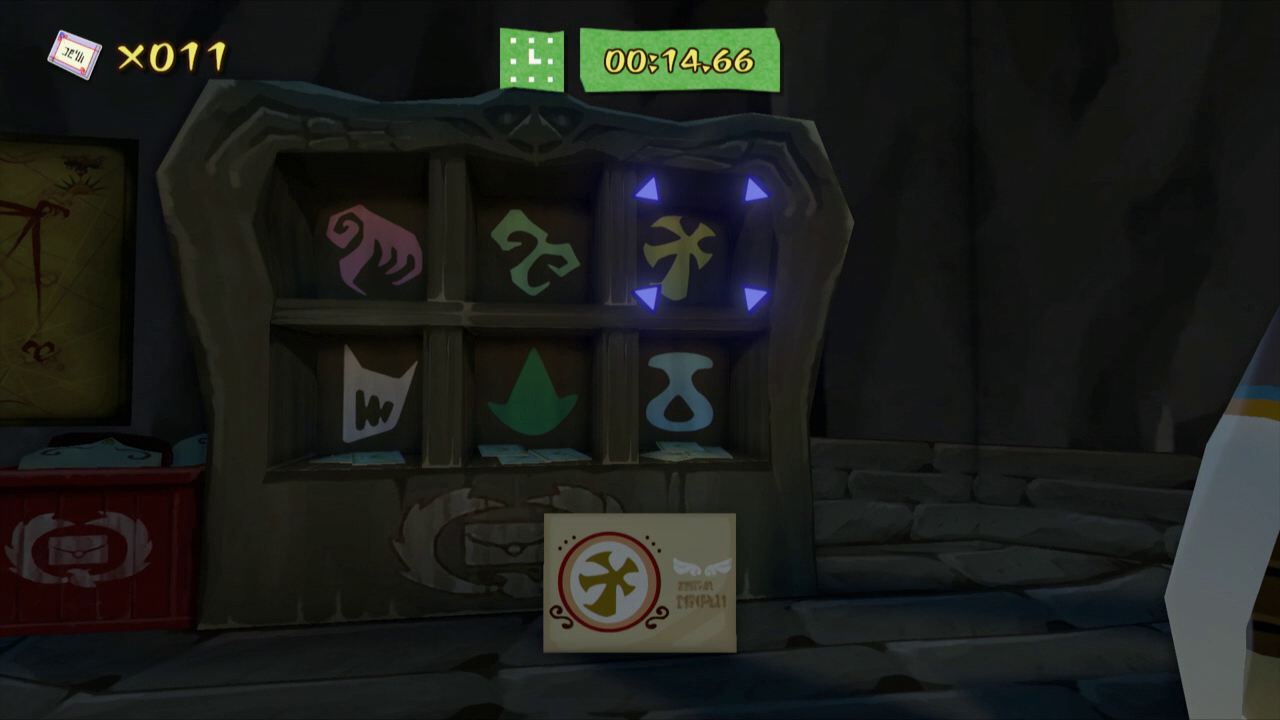 Keep sorting until you get 25 letters or more and he’ll give you three rupees per letter. Afterwards, he mentions that he’s hired a helper and asks you to come by and give the new guy some pointers later.

Head back downstairs and go through the doorway with a guard posted next to it. Once outside, head left and jump down to where the bridge has broken. Speak with Medli and she’ll ask you to help her reach the other side of the bridge. When she’s finished talking, pick her up and stand on the small rock behind you. 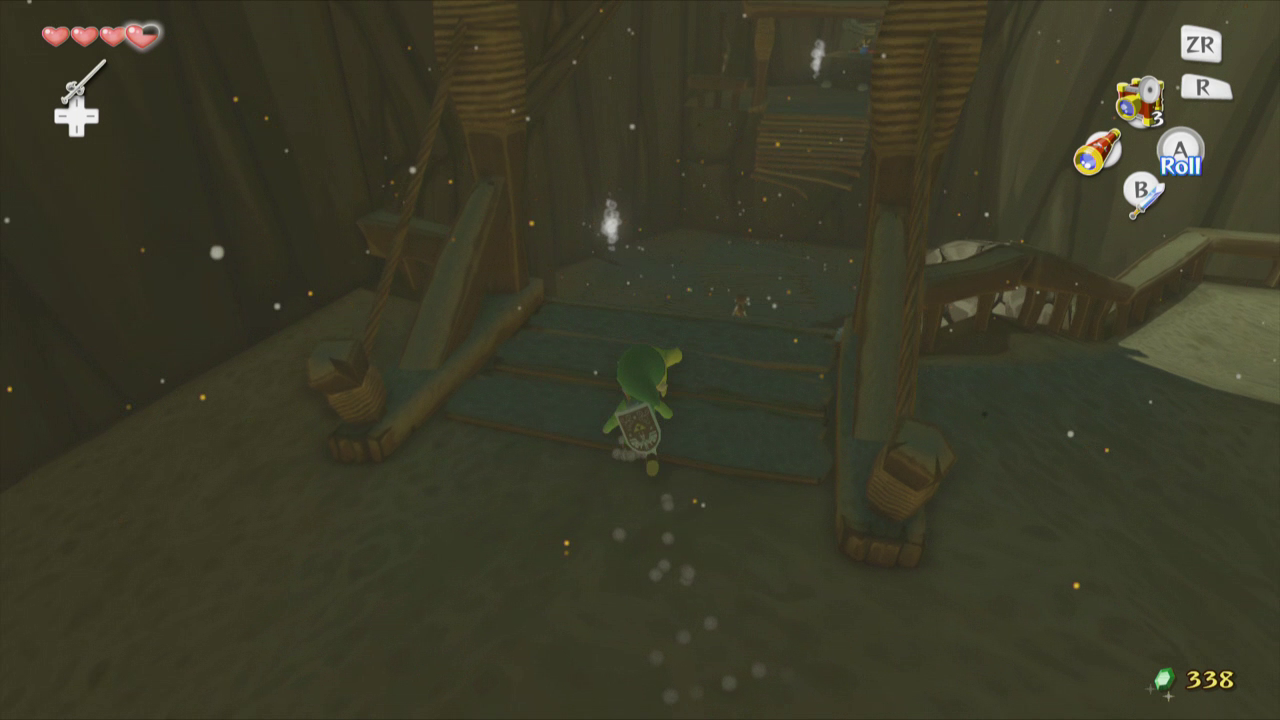 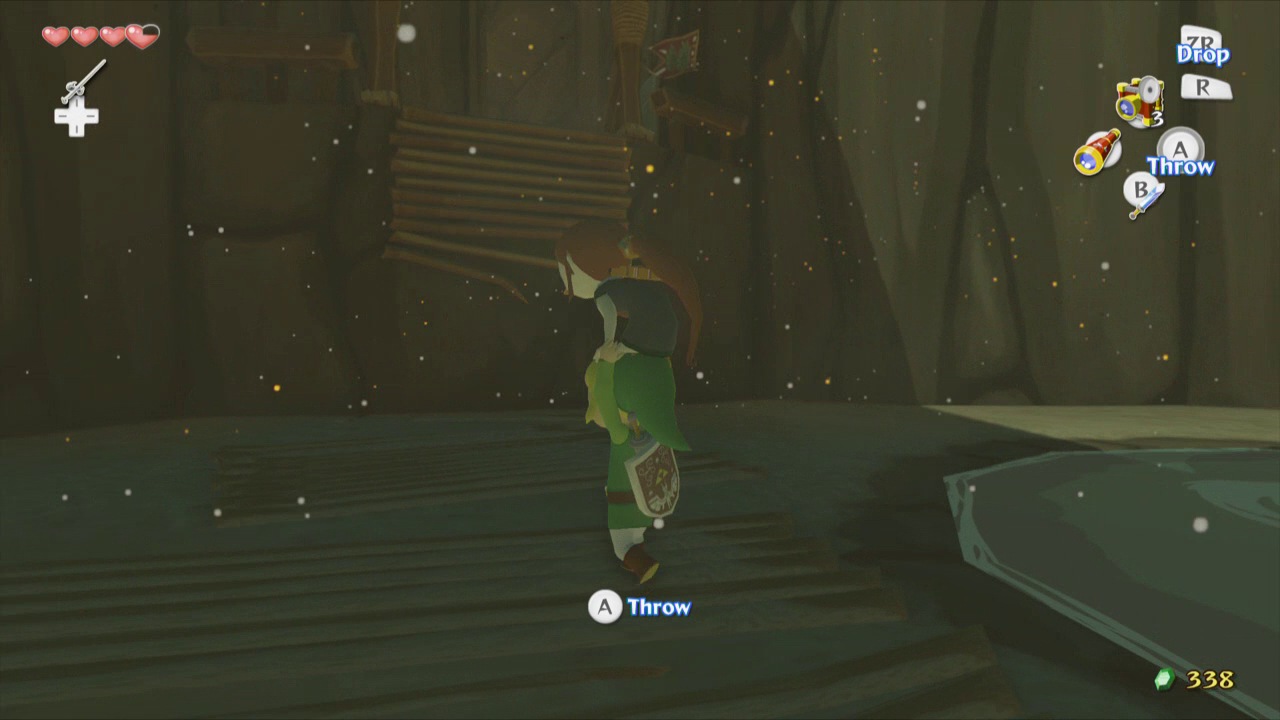 Pay attention to how the ashes are moving and throw Medli when it is blowing toward the other side of the bridge. She’ll tell you she’ll be able to climb Dragon Roost from here and gives you an Empty Bottle in return for helping her out. 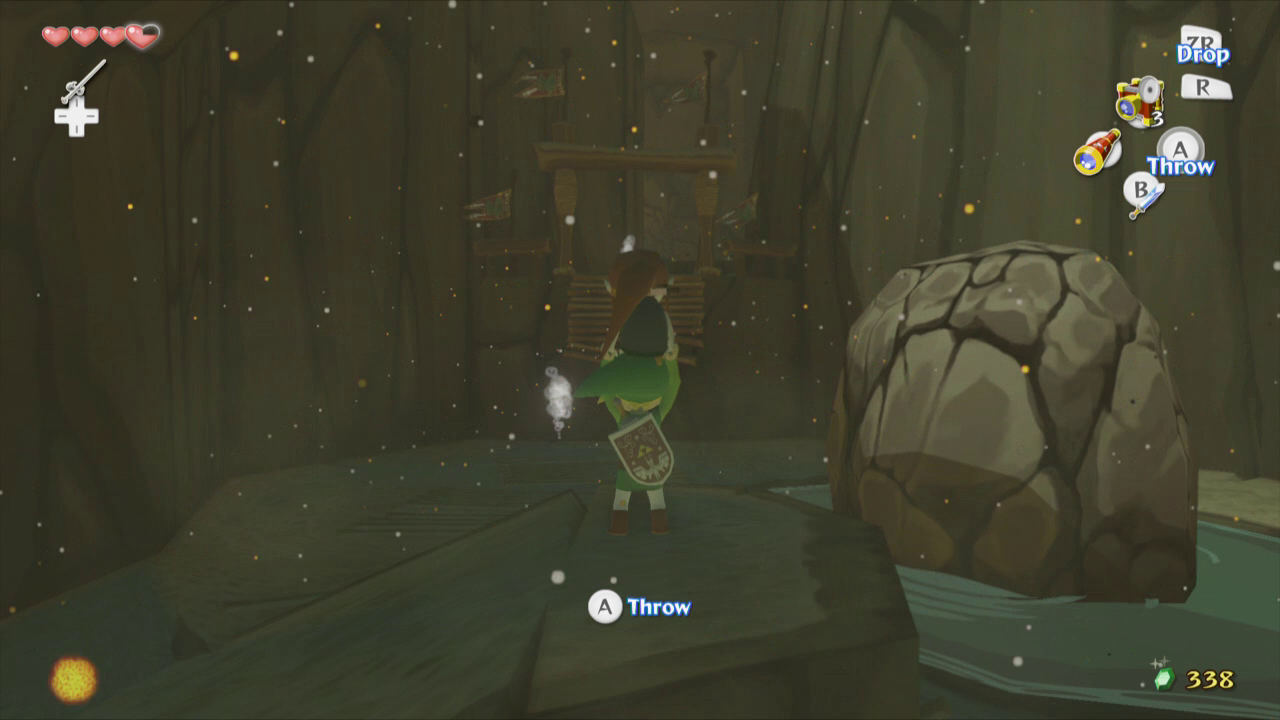 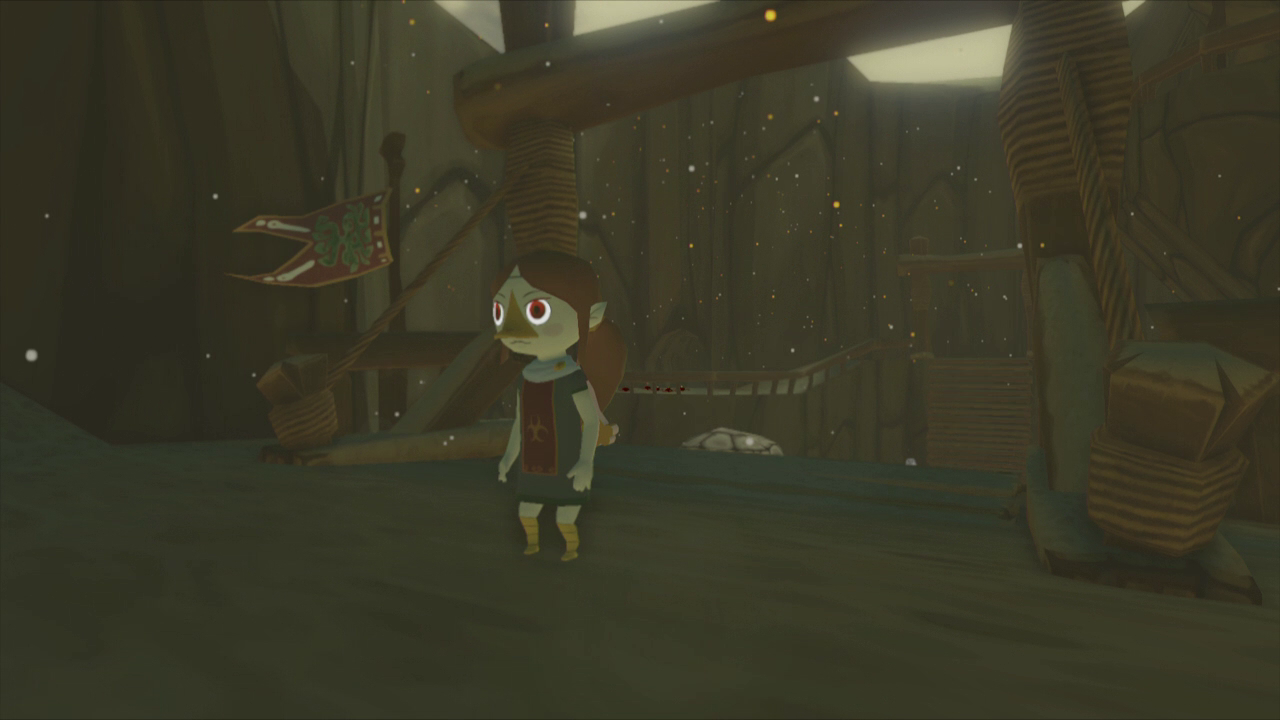 Get out your bottle and use it to collect some water from near the rock. Climb the segment of broken ladder back up to where you entered the area and pour the water on one of the red plants to make it sprout into a bomb flower. 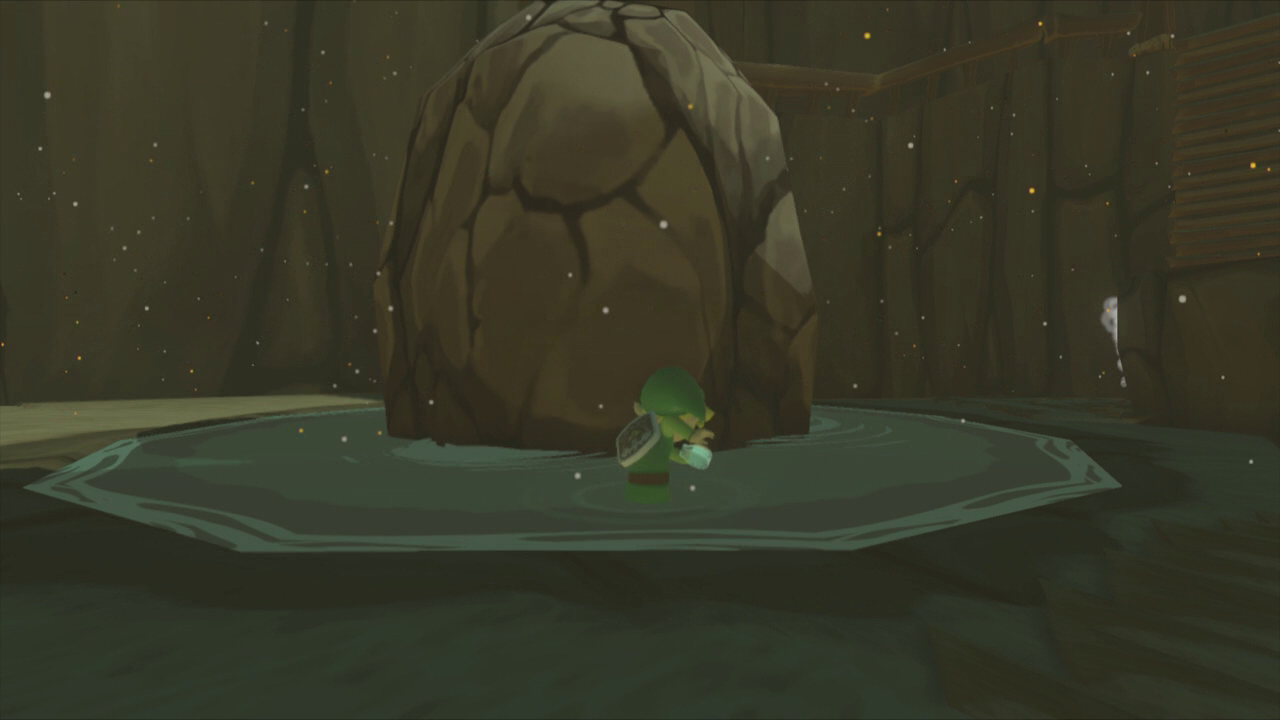 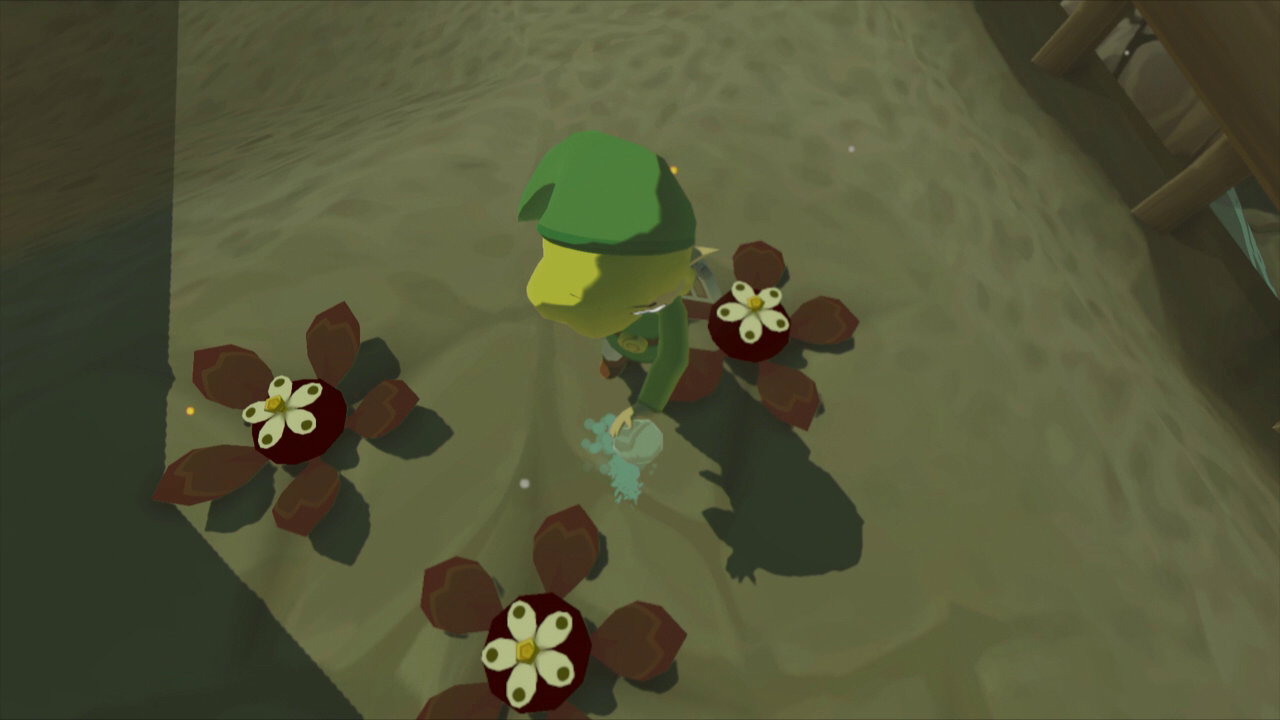 This next part can be a little bit tricky to perform correctly. You need to throw the bomb to the rock to blow it up without having the bomb land in the water. You can try to land the bomb on the rock, or try and wait a few seconds. Once the bomb starts flashing more rapidly throw it and it will explode the rock. Once you blow it up water will fill the area and you can swim across and climb up the other side. 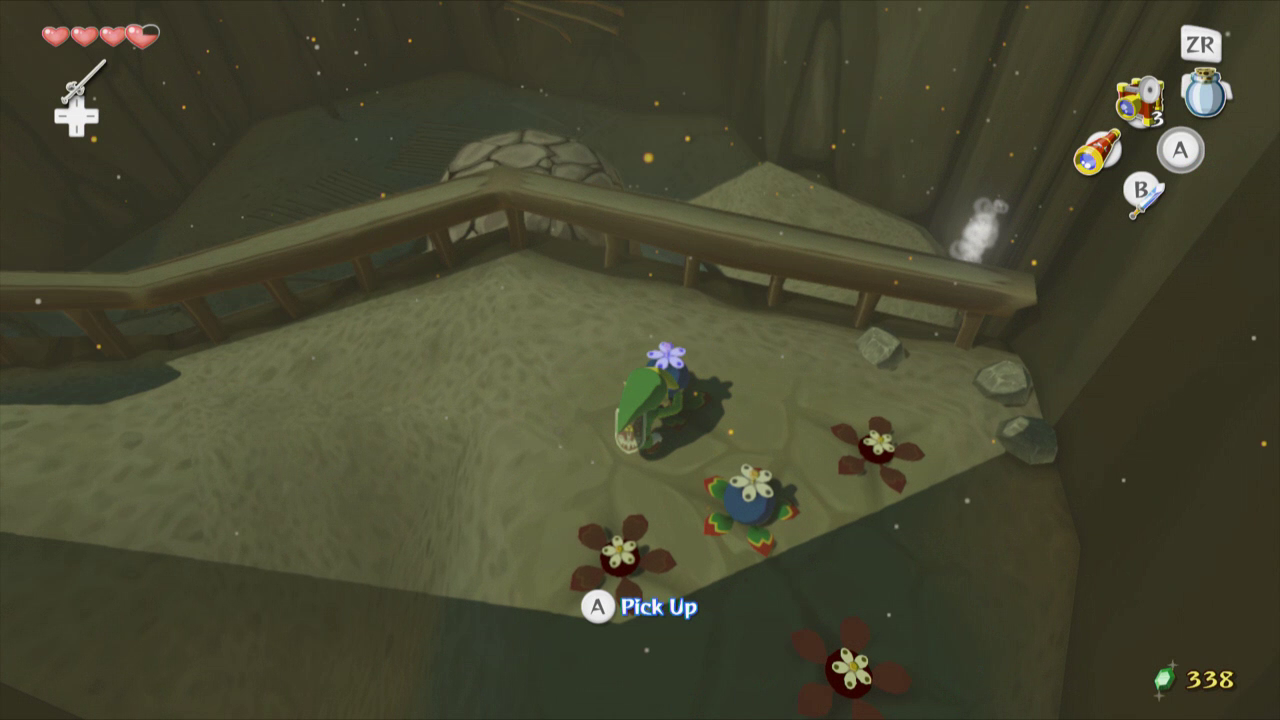 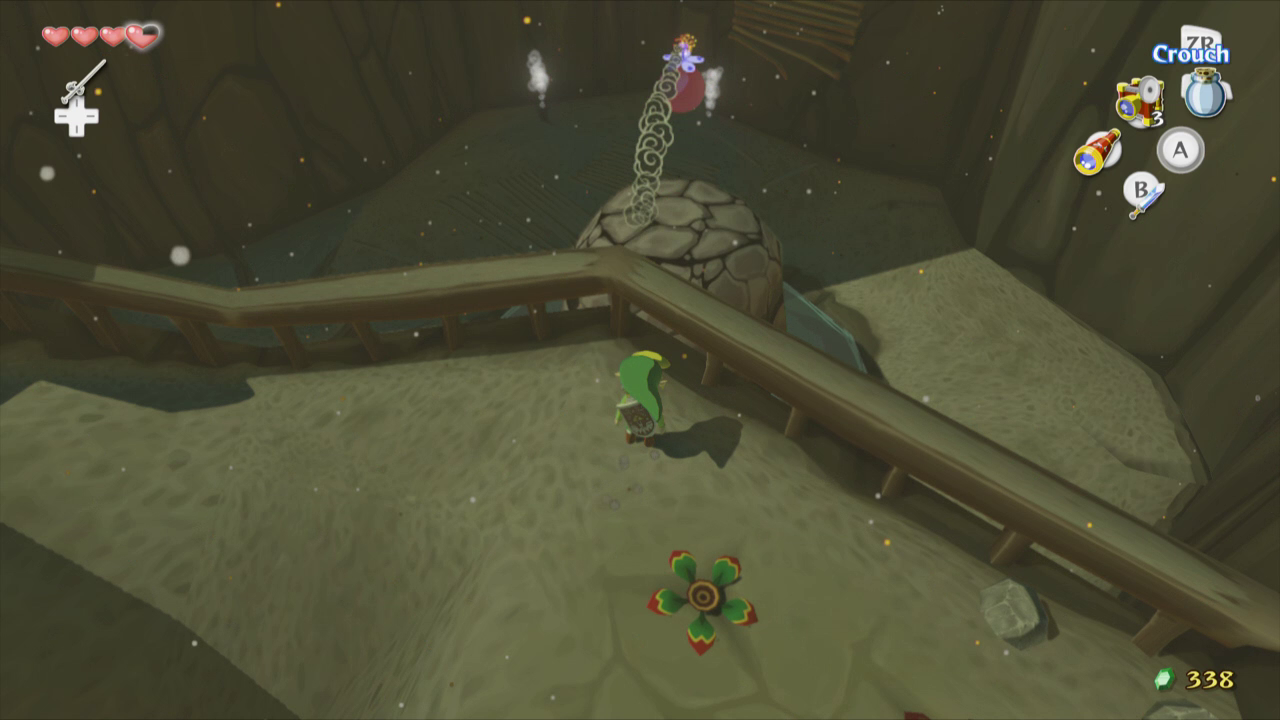 This is another tricky part. Pick up a bomb flower and try to throw it into the pot that the statue is holding. Be careful not to fall into the lava though, because you will lose some life and be sent back to the entrance of this area. 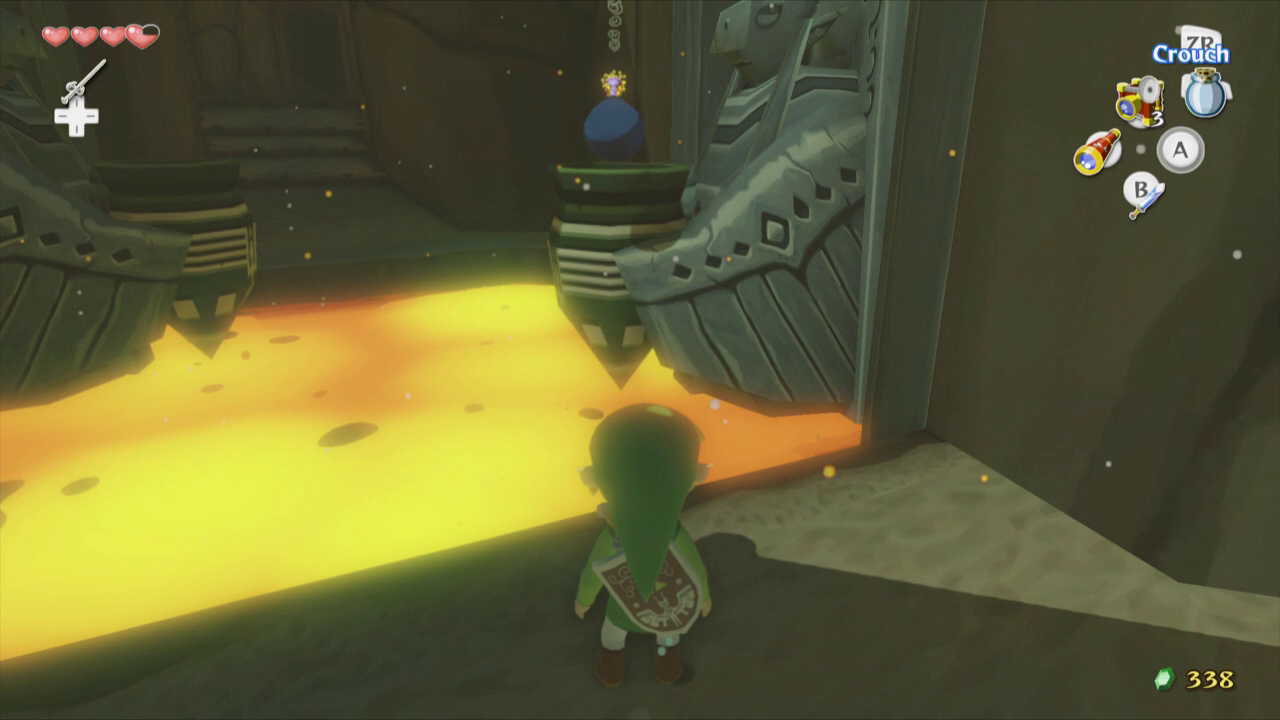 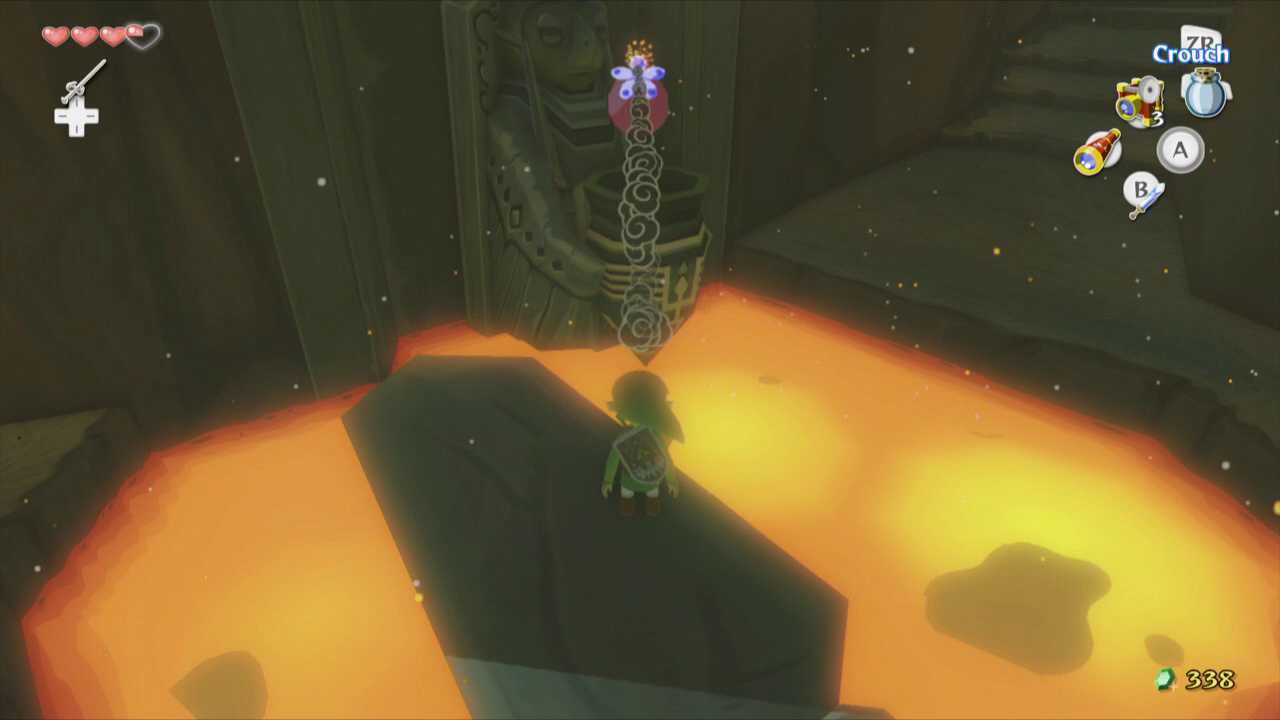 Blow up the statue on the right first so that it falls into the lava. Then grab another bomb flower and jump to the newly created platform to throw the bomb into the second statue’s pot. Once you finish enter Dragon Roost Cavern through the doorway.