A Link to the Past Glitches

In Kakariko Village, Link should go to the longest horizontal road which is directly above the Kakariko Inn. The player should line up directly underneath the door with grass blocking the entrance to the building and throw their boomerang to the east. As quick as possible, the Pegasus Boots should be used to head west. Link should continue running until he hits the tree barrier. Your boomerang will be traveling from west to east across the screen. The Boomerang will be traveling very quickly and it will go through buildings, fences, and other obstacles. After a while, the boomerang will slow and, if the player waits long enough, it will return to them. If Link has the Magical Boomerang, then some pieces of scenery may turn into cut-down bushes: this will not change if Link walks through them. This glitch will end when Link enters a different screen, building, or if the boomerang is returned. This glitch works best after the Running Man has run away. 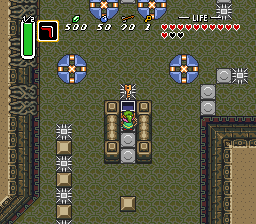 For this glitch, Link must be in Skull Woods. In this specific room (see picture) Link must charge up his sword and position himself just right, where he is caught bouncing in the two bumpers. While bouncing back and forth a Floormaster should come down and try to attack him. Link should then use the spin attack to kill it. Once the player has repeated this a few times, they should walk out of the room. This will cause the game to glitch at strange times. Link can walk through certain walls, doors, not get injured by some enemies, and he can also fall and die in random spots of the dungeon.

Fake Flippers allows Link to swim in deep water before acquiring the Flippers. The glitch is only doable while playing the Japanese 1.0 version of the game.

In the Dark World on Death Mountain, if Link travels down to where the broken bridge would be and use the mirror against the wall, he will then be transported to the Light World. By moving very slightly to the right the portal will automatically warp him back to the Dark World. Next, Link shouldn't move, but warp back to the Light World, where he should step out of the portal, charge up his sword and slowly move back into the portal again. This glitch enables him to go past the ledge, and he gains access to an area of the Dark World and gets items that he would not be able to obtain at this point in the game. 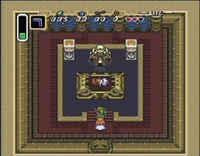 Once Link has saved Princess Zelda, he can find a ledge to jump off in the castle. Right as he jumps, the player should open the pause menu and choose the save and quit option. When the game restarts, Link must get hit by the Ball and Chain Soldier. This should allow him to clip through the wall above. To finish this glitch, Link should walk up a few screens until he arrives in the room with Agahnim. Zelda will still be behind you and she will also be laying down in the bed in front of Agahnim during the cutscene.

Before Link saves Princess Zelda, he should jump off one of the ledges in the main room. Right as he jumps, the player should open the pause menu and choose the save and quit option. When the game restarts, Link should go back into the castle, without being hit, and enter the upper layer of the left room. He should go up to the first window on the left and tap it with his sword. The blue soldier will hit Link, allowing him to clip into the wall. Link can then traverse out-of-bounds in the castle until he reaches the Triforce room. This glitch allows the player to beat the game in a very small amount of time, resulting in this glitch not being used in most speedruns, since it is not very entertaining to watch; or speedrun.