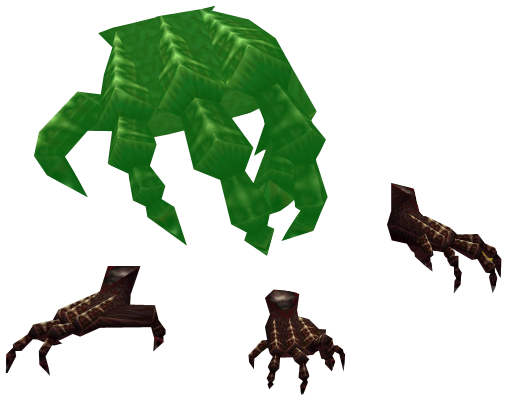 Floormasters are recurring enemies in The Legend of Zelda series. They appear as giant hands comparable to Wallmasters. In some of their appearances, they will bring Link back to the beginning of a dungeon or area.

Floormasters appear in dungeon areas and dark caves. They behave in a manner identical to in Ocarina of Time.

This is the third and fourth appearance of the Floormaster in the Zelda series. The Floormaster takes a different form in these games: a blue hand that comes out of the ground. If the hand comes out and grabs Link, it will pull him down and make him start at the entrance of the dungeon again.

The Floormaster once again takes on a different form in The Wind Waker. It is a black hand coming out of a purple glow in the floor. This time around, a Floormaster will grab Link and take him back a few rooms. It can also kidnap Medli or Makar in the Earth Temple and Wind Temple respectively and put them in cages. In addition, they can grab nearby items like skulls or jars to throw them at Link.

Floormasters are pretty much the same as in The Wind Waker, but instead of sending Link back a room, they will grab him and take him to the Dark World. In the Dark World, Link must find his way back by using a portal. In Four Swords Adventures, Floormasters can not be defeated. If Link hits one, it will be stunned for one or two seconds. The only way Link can get past without being noticed is by carrying the Moon Pearl, but the pearl can be stolen out of Link's hands.

This time, the Floormaster is a blue levitating hand that will grab Link and throw him back to the start of the dungeon. The Floormaster will not attack Link in Minish form unless he approaches them. Floormasters can be defeated with the Sword, but they can not be attacked while levitating.