From Zelda Dungeon Wiki
Jump to navigation Jump to search
Want an adless experience? Log in or Create an account.
Dungeon 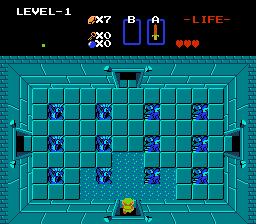 Level 1: The Eagle entry from The Legend of Zelda, the first-ever dungeon in the series.

Dungeons appear in every single The Legend of Zelda game in one form or another. Usually going through a Dungeon follows a specific pattern: obtain a Map, Compass, and a Boss Key/Big Key in that order, obtaining Small Keys and a main Dungeon item(s) along the way, then defeat a Boss using said item, completing the said Dungeon. Completing Dungeons require puzzle solving and combat. The following is an outline of what Dungeons are like in different games.

The Legend of Zelda has nine Dungeons in total. All the Dungeons have a lot of rectangle shaped rooms usually filled with enemies, and they all have a Compass, a Map, and one or more items. They each have a boss, although some of the bosses are recycled.

The Legend of Zelda Dungeons[edit][hide][show]

In The Adventure of Link, side-scrolling Dungeons replace the overhead view in the original game. While Keys can be used in Dungeons other than which they are found, doing so could make completing certain levels impossible until late in the game after acquiring the Magic Key. Unlike other games in the series, no other Dungeon items are present. In total, there are seven Dungeons in The Adventure of Link.

Link's Awakening brings back some side-scrolling to get to different parts of a Dungeon, but most of the gameplay are still played with an overhead view. The Map, Compass and Big Key are back (called a Nightmare's Key in Link's Awakening); the Compass has an added feature of beeping whenever a Key is in a room Link enters. All Keys are specific to their Dungeon. Mini-Bosses are present, also the bosses (Nightmares) and the Mini-Bosses are given more personality in this game. In Link's Awakening, there are eight main Dungeons.

As The Legend of Zelda switched to a 3D perspective, the Dungeons changed their structure and puzzles. The Dungeons in Ocarina of Time are varied and feature very unique puzzles. The Map, Compass, and Boss Key are included, and also an item that is usually required to defeat the boss. Again, Keys are specific to each Dungeon. There are nine main Dungeons and three Mini-Dungeons in Ocarina of Time.

In Four Swords, the Dungeons are very different from previous installments due to the multiplayer element. Similar to Four Swords Adventures, there are multiple items that can be found in each area, but Big Keys, Compasses, and Maps cannot be obtained. In every stage, the Links have to transverse two Dungeon levels. Four Swords creates the two levels by randomly selecting a Dungeon setting, a vast area with many set challenges, then inserting a randomly selected new Dungeon part into it. However, some Dungeon settings are complete on their own and does not require the insertion of a Dungeon part. Due to this, the Dungeons will likely be different from the last time the Links have gone through it. Like in previous Zelda games, there is a boss at the end of the areas. Once the Links have defeated the boss in the three major areas, the Great Fairies reward them with a special Key depending on how many Rupees they have collected.

At the beginning of Four Swords, there are four stages to choose from. These include the Chambers of Insight, Sea of Trees, Talus Cave, and Death Mountain. The Chambers of Insight is a tutorial level and is not necessary to complete it to finish the game. After the Links have collected the three Silver Keys, Vaati's Palace appears.

The Dungeons in Twilight Princess are almost exactly the same as the ones in Ocarina of Time. There are nine main Dungeons in total.

Temple of the Ocean King

The Dungeons in Spirit Tracks have no Compass or Map, but they do have Dungeon items and Boss Keys. They have an overhead perspective. There are five main Dungeons in total plus the Tower of Spirits.

Breath of the Wild Dungeons[edit][hide][show]