From Zelda Dungeon Wiki
Jump to navigation Jump to search
Want an adless experience? Log in or Create an account.
Goron Mines 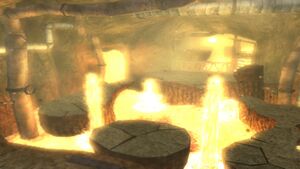 The Goron Mines is the second dungeon in Twilight Princess. It is situated towards the summit of Death Mountain. The mines delve deep into the mountain, which is also a highly active volcano. Within the dungeon itself lie several treacherous lava pits as well as mechanical structures. The mines were once used by the Gorons, but due to the rise in eruptions and other volcanic activity, the inner grounds have become empty among the race.

Link searches the Goron Mines as directed by the Light Spirit Eldin in hopes of finding the second piece of the Fused Shadow.[2] Link is only allowed entrance into the mines after he has beaten Gor Coron in a sumo wrestling match,[3] mainly because the mines are a sacred place among the Gorons.[4][2]

This dungeon initially houses three of the four Goron Elders. Link is told by Gor Amoto, the first elder he meets in the mines, that the three elders in the mines hold the three Key Shards,[5] which when combined create the key to the room into which Darbus has been locked.[6] After collecting the first shard from Gor Amoto, Link proceeds to travel through the dungeon looking for the final two elders. After he finds the second elder, Gor Ebizo, Link is told by Gor Ebizo that there is a weapon that was left in the mine by the hero of old,[7] referred to as the Hero's Weapon. After defeating the guardian of the treasure, Dangoro,[8] Link wins the right to use the Hero's Bow, which is used to find the final Goron Elder, Gor Liggs. After finding the final elder and combining the shards, Link can open the door to the room where Darbus supposedly lies.[6] He finds not Darbus, but the dungeon Boss, Fyrus. After Link uses a combination of the Hero's Bow, Iron Boots, and Ordon Sword to defeat Fyrus, he is rewarded with the second piece of the Fused Shadow.

Here are all the enemies found within the Goron Mines:

The Mini-Boss of the Goron Mines is known as Dangoro, the guardian of the Hero's Weapon. He is as arrogant as any other Goron Link meets, all of them dismissing the thought of a human defeating them in a contest of strength. The battle against Dangoro takes place on a magnetic platform that was originally hung in the air by chains, but fell onto a pool of lava because of Dangoro's aggressive slam. The fact that the platform is magnetic is very helpful to Link, as he can equip the Iron Boots and never have to worry about falling into the lava.[9] If Link can use the Iron Boots and his own strength to knock Dangoro off the platform into the lava three times, Dangoro reveals he is amazed at Link's strength and admits defeat.[10] He grants Link entrance to where the Hero's Bow lies.[11][1] Dangoro remains in this room for the remainder of the game. 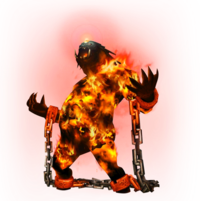 The boss of the Goron Mines is known as the Twilit Igniter: Fyrus. Link has been told by the four Goron Elders that Darbus, the Goron Patriarch,[12] lies in a room in the depth of the dungeon. Upon entrance to this room, Link is obviously expecting to find a Goron, but instead he sees a giant figure with a pitch black body that goes by the name of Fyrus. This battle takes place in a circular room with pillars all around that extend to the ceiling. Fyrus is held back by chains on his arms and legs, but soon shows Link that they are no match for him. He frees himself from the shackles with apparent ease. The battle requires good use of the Hero's Bow and of the Iron Boots. After Link uses the first Hidden Skill, the Ending Blow, on Fyrus, Fyrus is defeated. All of Fyrus' black skin explodes off of him and forms the second piece of the Fused Shadow, which gracefully falls into Link's hands. Now that the Fused Shadow has left Fyrus, he becomes Darbus, a giant Goron that has a huge head and ginormous shoulders. Darbus is completely dumbfounded of his surroundings, having no idea where he is or how he got there.[13][14] He is unaware that it was Link who had saved him, and doesn't even seem to notice Link grab the Heart Container and leave. Darbus is later seen in Kakariko Village, specifically in the Sanctuary.

The Goron Mines feature the main four Dungeon Items that every dungeon in Twilight Princess has: the Dungeon Map, the Compass, the Big Key, and Small Keys.

The Dungeon Map is used to show Link exactly how the dungeon is laid out. It comes in handy if Link ever gets lost while searching through the dungeon. The Dungeon Map can be found in the first Goron Elders' room. After collecting the first Key Shard from Gor Amoto, Link can open the Treasure Chest that lies behind Gor Amoto. Inside the chest lies the Dungeon Map.

The Compass is used to show Link the location of each and every Treasure Chest found in the dungeon, as well as the location of the Boss. It is found in one of the first rooms Link encounters after acquiring the Hero's Bow. This room is full of Beamos, which Link can now defeat with the Hero's Bow. The Compass is behind one of the Beamos in a Treasure Chest.

The Big Key is used to open the door that leads to the dungeon boss, Fyrus. A unique design in the game, it has been split into three Key Shards by the Goron Elders. Each Goron Elder in the mines has a Shard, so Link must travel to each one to combine them and create the Big Key.

There are three Small Keys found throughout the Goron Mines. They are all used to open certain locked doors that block Link's path through the dungeon. They are all found within Treasure Chests.

There are seventeen Treasure Chests waiting to be found in the Goron Mines. These chests contain a variety of different items that help Link as he further travels the dungeon and the game, including Rupees, Dungeon Items, Pieces of Heart, and Equipment.

Link collecting a Purple Rupee in one of the Goron Elders' room.

There are plenty of chests that contain Rupees in the Goron Mines, nine to be exact. Two of these chests contain a Yellow Rupee, which are worth 10 rupees.[15] Three of the chests contain a Red Rupee, which is worth 20 Rupees.[16] The remaining four chests located in the Goron Mines contain a single Purple Rupee, which is worth 50 Rupees.[17] Combine these Rupees with the ones Link can collect from barrels or from enemies, it is likely Link's wallet will be full before the end of the dungeon. Using Ooccoo and Ooccoo Jr. to leave and spend some Rupees on refilling supplies is recommended.

As with every other dungeon in Twilight Princess, Link can find two Pieces of Heart in the Goron Mines. Both Pieces of Heart require the Iron Boots to collect. These are the seventh and eighth Pieces of Heart collected. The first one is in a room with many Dodongos. Keep following the trail of Torch Slugs while hanging from the ceiling to the northwest alcove, where Link can drop down and obtain the piece. The second Piece of Heart is in a room with diamond switches. While climbing up the magnetic wall, turn to the left instead of right, and Link will find a platform with a single chest, which contains the Piece of Heart.

There is only a single Treasure Chest throughout all of the Goron Mines that contains equipment. This chest contains the Hero's Bow, a powerful Bow that was previously held by the hero of legend.[18] It is located in the room directly after the Mini-Boss room. It serves as the reward for beating the Mini-Boss, Dangoro. It is very helpful in completing the dungeon, and is also one of the most used items in the game. It can be used to shoot arrows with long-range accuracy as well as slicing ropes.[19]