From Zelda Dungeon Wiki
Jump to navigation Jump to search
Want an adless experience? Log in or Create an account.
Dodongo 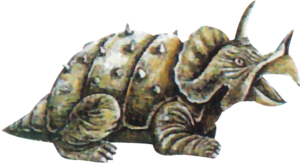 Dodongos are recurring enemies in The Legend of Zelda series. In the early games, they look very similar to a Triceratops, but in Ocarina of Time, Majora's Mask, and Twilight Princess, they appear more reptile-like.

In The Legend of Zelda, Dodongo is a boss that is encountered in Level 2: The Moon, Level 5: The Lizard, and Level 7: The Demon.

Dodongo from Ocarina of Time

In Ocarina of Time, Dodongos are slow moving and bulky, but watch out because they can do a lot of damage if you are not careful. Their primary attack is to breathe fire at Link, which makes them sit still for a while. By getting close, you can make them do this, then quickly circle around and smack their tail (the only place they are vulnerable). They will howl and spin around quickly, so get out of the way or else their tail will hit Link. Circle around and repeat the process. You can even do a jump attack on their tail with a Deku Stick to take them out in one hit. If Link positions himself right, he can throw a bomb or Bomb Flower in front of them and they will swallow it, destroying them at once. The other way to defeat them is to simply shoot them with the Slingshot between their attacks. They are primarily found in Dodongo's Cavern, where Baby Dodongos and King Dodongo can also be found.

In Oracle of Seasons, Dodongo is a boss that is encountered in the second dungeon, Snake's Remains. Dimitri also appears in this game.

The only Dodongo in Oracle of Ages is Dimitri, a Dodongo who allows Link to ride on his back, allowing him to travel through water. He is met on Crescent Island after completing the third dungeon, Moonlit Grotto, when some Tokay mistake him for a fish and plan to eat him. After rescuing him from the Tokay by trading him for some ember seeds, Link rides on Dmitri's back to get back to the land of Labrynna. Link can choose Dimitri as his companion and call him with Dimitri's Flute. Dimitri can also go up waterfalls.

The Dodongos first appear as the boss of the Tower of Flames stage and Level 3 as well. After picking up the bombs in the previous rooms, the Links can place one in front of the open mouth of a Dodongo. After the Dodongo swallows the bomb, it will explode inside, damaging it. After three bomb explosions, the Dodongo will die.

A more powerful Dodongo can be found as the boss of the Realm of the Heavens, known as a Big Dodongo. Level 2 bombs must be used to defeat this Dodongo, which are obtained on the same screen as the boss fight. It is defeated in the same way as regular Dodongo.

The Dodongos in Twilight Princess are first spotted in the Goron Mines, and then in most of the hidden Caverns that are found around Hyrule, including the Bridge of Eldin Cavern and the Lake Hylia Cavern. In this game, they are more reptile-like than previous appearances.

They can be defeated by attacking their tail, which is their weak spot. A few goods hits with the Ordon Sword will defeat them. Alternatively, Link can shoot an arrow into their mouth with his bow. This will defeat them in one shot. Also, a Bomb Arrow shot at them will also defeat them instantly.

In this game, the Dodongo is found in the fourth dungeon, Glutko. Dodongos can be quite deadly. They will walk slowly up to Link and deliver a head smash, nailing Link with their spiky horn on top of its nose. This will take a full heart of damage and the recovery time is little to none between hits. The key to defeating the Dodongo is to kneel and slash a few times, and then quickly retreat. Keep going in and out, hitting the Dodongo 2-3 times each time, while avoiding his horn.

Dodongos can be found in Dordung Cave, Shutoy Lake, and Reesong Palace. They look like and act the same as they did in The Faces of Evil.