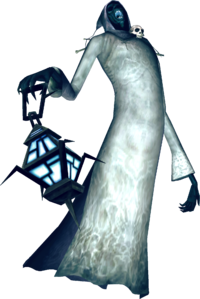 Big Poes are larger versions of Poes in The Legend of Zelda series.

In Hyrule Field in the future, there are Big Poes rather than Stalchildren. These larger and more aggressive version of the Poes hang out in specific parts of the field. They attack Link if he gets close while riding Epona. They drop flames from their lanterns rather than attacking directly, and conventional weapons do not work against them. To defeat them, Link must ride at them with Epona and use the Fairy Bow to take them out. After that, Link can collect them in Bottles and bring them to the Poe Collector at the entrance to the Hyrule Town Market. If Link brings him all ten Big Poes, he gives him an Empty Bottle as a prize.

In Majora's Mask, Link can defeat a Big Poe and swipe up its soul. Link can sell this at the Curiosity Shop for 200 Rupees. Link also needs a Big Poe to access further in the Beneath the Well area.

In Twilight Princess, Big Poes only appear in the Arbiter's Grounds. Link must defeat all four and collect their soul to advance in the dungeon.