From Zelda Dungeon Wiki
Jump to navigation Jump to search
Want an adless experience? Log in or Create an account.
Bari 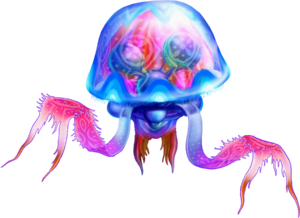 Bari are recurring enemies in The Legend of Zelda series.

Main article: Bari (A Link to the Past)

In A Link to the Past, there are three different types of Bari, and each of them have slightly different characteristics. The Red and Blue Bari are most common, first appearing in the Dark World within the Dark World. These enemies occasionally electrify, shocking Link if he comes into contact with them during this phase.

In the Game Boy Advance remake of A Link to the Past, a third Green variation of the Bari can be found within the Palace of the Four Sword.

These larger versions of the Biri are very easy really, as their only attack is to sit in one place and spin around. The only catch is they usually appear by falling from the ceiling. A simple sword slash damages Link, so he is better off using Deku Nuts to stun them or a quick Spin Attack. Once damaged, they split into three Biri. Once Link has the Boomerang, he can use it to easily defeat them. In general though, it is better to just avoid them altogether.

These jellyfish are only found underwater. Whenever they light up they are charging electricity, which means Link shouldn't strike them with any weapon that makes direct contact. To defeat them, Link must wait until they stop charging electricity and take a swipe at them with the sword. Much like Zol split, Bari will split into two smaller jellyfish known as Biri.

Until Link gets the Clawshot, just swim away from these enemies. Use the Clawshot while the Bari is not electrically charged to pull out its brain. Then slash away to defeat the Bari.

Like previous games, Bari slowly approach and occasionally surround themselves with electricity, posing some danger to Link. The Sword can be used to defeat them when they are not electrically charged, but they can be more easily be defeated with a long-range weapon such as the Bow or Fire Rod.

Bari can appear in four different colors, red, blue, silver, and gold. Red and Blue Bari split into two smaller Biri when defeated; while Blue and Silver Bari do not separate when attacked.