From Zelda Dungeon Wiki
Jump to navigation Jump to search
Want an adless experience? Log in or Create an account.
Goriya 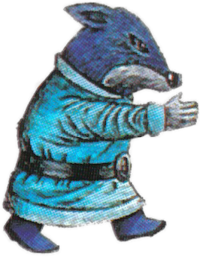 Goriyas are recurring enemies in The Legend of Zelda series. They use Boomerangs as throwing weapons.

In The Legend of Zelda, Goriya appear exclusively in Dungeons. They are found in groups and move about rooms, hurling boomerangs. After defeating groups of Goriya in Level 1: The Eagle and Level 2: The Moon, Link receives the Boomerang and Magical Boomerang respectively.

In Level 7: The Demon of the First Quest and Levels 3 & 8 of the Second Quest there are Hungry Goriyas that block the path through the dungeons. These Goriyas just sit there and block the way, mumbling "GRUMBLE, GRUMBLE.."[1], and cannot be killed. They only move out of the way if Link feeds them Food, which can be bought at some shops across Hyrule. After the Goriyas are fed, they disappear and allow Link to pass.

In The Adventure of Link, Goriya are found exclusively in Western Hyrule and appear in one of three varieties: Orange, Red, and Blue. Orange Goriya are encountered primarily on the plains of in the North of River area and south of Rauru. The red and blue types are found in caves from the Tantari Desert to Death Mountain. Each attacks Link by hurling boomerangs at him at four different levels. Some Link must block immediately while others fly over or under him and catch him in the back as they return. Link must be quick to both block from two directions and press the attack.

Main article: Goriya (A Link to the Past)

The Goriyas from A Link to the Past are significantly different than any of their appearances from any of the other Zelda titles. Gone are their Boomerangs and any type of versatility at all. Goriyas now act as mimics, very similar to Arm-Mimics from future Zelda titles. In Japan, this is because they are a different creature altogether called the "Coppie"(コッピ).

They will move in the opposite direction as Link does. There are two variations found in the game, with the stronger Red variant capable of shooting fireballs.

There is only one Goriya in Link's Awakening. It appears in a cave on Toronbo Shores and can only be seen with the Magnifying Lens. It offers to trade one of Link's items for the Boomerang.

The Goriyas in A Link Between Worlds are exact replicas of their predecessors from A Link to the Past. These enemies will mirror Link's movements as he moves around the room.

Goriyas come in two colors: Green and Red. Green Goriya can be defeated with a simple sword swipe and most other weapons. Red Goriya are more difficult, as they will block frontal attacks and shoot fireballs. To defeat them, they can be stunned with the Ice Rod, or a Bomb can thrown at them from afar.

Goriya appear in the same fashion as they do in The Wand of Gamelon.

Goriya are stationary enemies who kneel down and try to toss boomerangs towards Zelda. Goriya's have the ability to toss boomerangs at an angle as well, but they cannot toss them directly downward. The boomerang can be difficult to avoid, but since they are stationary enemies, they are rather simple to defeat. A single sword slash or sword beam will defeat the Goriya. Goriya will always leave behind a green ruby as a spoil once they have been defeated.