From Zelda Dungeon Wiki
Jump to navigation Jump to search
Want an adless experience? Log in or Create an account.
Rope 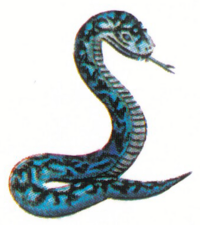 Ropes are recurring enemies in The Legend of Zelda series. They usually attack by dashing forward when Link is in sight. A sword is an effective weapon to use on them, which in turn causes them to disappear. They only cause minimal damage when touched. Although Ropes do not appear in Spirit Tracks, despite appearing in the prequel, the Whip resembles them.

In The Legend of Zelda, there are two types of ropes: Red and Flashing, and they can be found in various dungeons. When ropes see Link they rush towards him quite quickly in an effort to injure him. They can easily be defeated with the Sword, but Flashing ropes found in the Second Quest are four times as strong as the red variation.

In The Adventure of Link, Ropes act in a similar fashion to Blue Octoroks, often spitting rocks at Link. Some slither along the ground and shoot projectiles both high and low. Red Ropes, only found in the Great Palace, spit fireballs that can only be blocked by the Reflect Spell.

Unlike in The Legend of Zelda and The Adventure of Link, there is only one type of Rope, and they are usually found within various dungeons. When a rope catches sight of Link, it rushes towards him very fast in an effort to injure him. They take approximately two hits to defeat with the regular sword, and they can easily deplete Link's hearts quickly in the beginning of the game as they move very quickly. One of their most iconic appearances takes place early in the game when Link is given two switches to choose between. One will open the door to the Sanctuary, the other will cause Ropes to fall from the ceiling.

These snake-like enemies are constantly moving around the room looking for their enemy. When they see Link, they will dart at him in a straight line. Ropes may be frustrating at first, but they are very easy to predict once used to them. Wait in one spot in the room, near the edge of the wall, or in the corner of the room. When a Rope is darting at Link, face towards it and be ready to give it a single slice with the sword.

Ropes are an easy monster to defeat, only taking one hit from Link's sword. A tougher version called Golden Rope also exists in Hyrule.

In Phantom Hourglass, Ropes are a very simple enemy to defeat. They are normally found within dungeons and caves, and even outside Molida Island where the Old Wayfarer lives. When they see Link, they rush towards him in an attempt to hurt him. In this game, ropes seem to be easier to defeat as they appear to not move as fast as they do in previous installments, and they only take one swipe from Link's sword to be slain.