From Zelda Dungeon Wiki
Jump to navigation Jump to search
Want an adless experience? Log in or Create an account.
Eyegore 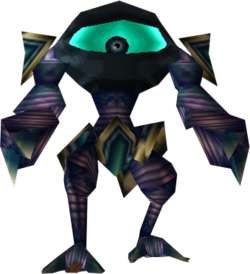 Eyegores are recurring enemies in The Legend of Zelda series.

In A Link to the Past, Eyegores are found in several dungeons, both in the Light World and the Dark World.

First encountered within the Eastern Palace, these enemies originally appear as statues, standing completely still unless Link draws near. When Link comes in close proximity to an Eyegore, its eye will open up and it will start charging towards Link. While the Eyegore is moving, Link can then attack the massive creature. The green eyegore does have quite a bit of power though as it will take eight sword slashes with the Fighter's Sword to defeat this creature. Alternatively, Link can pick up a nearby pot and toss it at the Eyegore to kill it instantly while it's moving.

After Link has acquired the dungeon item from the Eastern Palace, the Bow, he will be able to defeat these creatures in an easier fashion. When the Eyegore is moving towards Link, one Arrow to the eye will immediately defeat the creature. Eyegores will often leave behind arrows as a reward for Link.

Found near the end of the Eastern Palace, Red Eyegores are much stronger than their green counterparts. A Red Eyegore cannot be harmed by Link's Fighter's Sword or by pots that are thrown by him. Instead, Link must use his arrows to defeat this variation of the enemy. However, much like other red colored enemies in A Link to the Past, the Red Eyegore has stronger defense, requiring two arrows to be defeated.

Despite its stronger health, the Red Eyegore does not additional damage to Link. If it successfully contacts Link, a full heart of damage will be done.

The Eyegore's only 3D appearance is in Majora's Mask. There is only two of them in the game, which both can be found within the Stone Tower Temple as a Mini-Boss. He can shoot laser beams from his eyes and smash his arms on the ground if Link gets close to him. To defeat this foe, Link can walk up to him and back, and reflect the laser beams from his Mirror Shield. When his eye becomes yellow, Link must shoot it with his arrows, He must do this four times to defeat it. After defeating it, Link will receive the Giant's Mask.

Eyegores in The Minish Cap are slightly different from other games. Eyegores appear in Castor Wilds standing immobile until an arrow is shot into their eye, causing them to close their eye for a few seconds. They then hop towards Link, turning as he does. They can be defeated by shooting arrows at their eye.

Unlike many other versions of this enemy in previous games, any color of Eyegore can be defeated with simple sword attacks.