Desert Palace (A Link to the Past)

From Zelda Dungeon Wiki
Jump to navigation Jump to search
Want an adless experience? Log in or Create an account.
Desert Palace 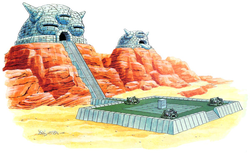 Artwork of the Desert Palace

"Early Hylians erected a palace in the desert that was unlike any other in the land. It had several exits but only one main entrance, which they blocked with huge turtle-like boulders. The upper floors were caves carved out of the mountain, perfect for avoiding the intense midday heat. The cattle skeletons that lined the path to the main doors attested to the harshness of the desert, but other, more hard beasts still roamed the sands, menacing travelers who dared wander into their territory."

"A mysterious Hylian message carved into stone near the palace entrance was the key to opening it's main doors."

"The secret to moving the three stones that blocked the entrance to the palace was only learned with knowledge from the Book of Mudora."

"Desert Dwellers"
"Inside the castle were wonders like none seen before. Several rooms had statue sentries that prevented visitors from admiring the rich furnishings within. The statues operated by primitive, but effective, radar. They scanned the rooms constantly, and when they sensed the presence of intruders, they blasted them with deadly accurate rays. The only way to avoid them was to keep moving ahead of or behind the circular scan."

These are enemies Link encounters in the Desert Palace:

Once Link enters, Link sees three Lanmolas, coming out of the ground and shooting rocks in four directions. The only vulnerable part of the Lanmola is the head. Either strike it with your sword a couple times, or you can time when the Lanmola will come out and use an arrow to hit it in the head. Keep hitting them using these methord until two of the three are gone. It should take about six hits for each to die.

When there is only one Lanmola left, it will shoot rocks in eight directions instead of four. Just dodge the rocks and keep striking it with your sword or arrows.

Link receives the Pendant of Power after defeating Lanmola.

A Link to the Past Dungeons[edit][hide][show]
Retrieved from "https://www.zeldadungeon.net/wiki/index.php?title=Desert_Palace_(A_Link_to_the_Past)&oldid=449497"
Categories: