Turtle Rock (A Link to the Past) 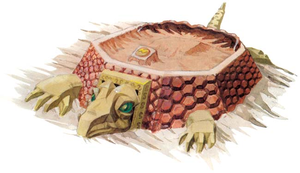 Turtle Rock is a dungeon in A Link to the Past. In order to enter Turtle Rock, Link uses the Quake Medallion to make the entrance appear. Conservation of magic power is important due to the Cane of Somaria being used through out Turtle Rock. Sahasrahla even tells Link to bring the Medicine of Magic. Link acquires the Mirror Shield while exploring Turtle Rock. The Mirror Shield helps Link explore more of the dungeon. Link encounters the boss, Trinexx. After defeating Trinexx, Link receives his last Heart Container and the Seventh Crystal containing Zelda.

"The huge Turtle Rock dungeon was carved deep into the core of Eastern Death Mountain. Its four floors were riddled with puzzling traps and bottomless pits. It is said that only those who possessed the Cane of Somaria could float over the wide pits in many of the dungeon's chambers. The Fire Rod and the Ice Rod were also essential equipment for fighting the Trinexx which lurked in the dungeon's lowest level. This dungeon is said to be where Zelda was held prisoner."

"The Shell Opened
Like Misery Mire, Turtle Rock was closed by a magical seal. Only someone with a particular medallion could conjure up the magic needed to break the seal. It is said that when this magic was used, the head of the turtle disappeared to reveal the entrance to the dungeon."

"The only way to enter the isolated area of Turtle Rock was through a Warp Tile in the Light World. The Warp Tile was found on top of a similarly shaped rock. Adventurers discovered it by hitting the wooden spikes on the rock in a counter-clockwise pattern."

"The cane of Somaria was essential for dungeon exploring."

"Turtle Rock was carved into the shape of a turtle by inhabitants of the Golden Land, before Ganon took over."

"Eye Beam Alert
Those who explored Turtle Rock Dungeon told stories of eye-shaped holes in the walls that emitted deadly beams. Usually, the only way to counteract the power of the beams was to use the reflective Mirror Shield. One such hole was situated over a door which only opened when adventures looked away. In order to go through the opening, they had to walk backwards."

--A Link to the Past Nintendo Player's Guide.