Hyrule Castle (A Link to the Past) 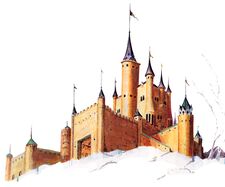 "Hyrule Castle once welcomed all Hyrulians. It was the home to several generations of royalty who were worshipped by their people. Inside the castle, royal red carpets were rolled out over the castle's stone floors, and rich tapestries from far off lands adorned its walls. Many fierce battles were waged just outside the castle walls against outside attackers, but the Hyrulians prevailed-until Agahnim appeared with his sinister strategy."

In A Link to the Past, Hyrule Castle had two mini-dungeons within it. The first one being the first dungeon-type area in the game, the dungeons and sewers of the castle. Within this area Link rescues Zelda. The second mini-dungeon is the tower of Hyrule Castle, only accessible after acquiring the Master Sword. Which Link climbs to confront Agahnim.

Located in the dead center of Hyrule, the first time you enter the Castle it will be through a secret passage. Later on you can walk in through the front doors.

Outside of Hyrule Castle

The castle itself dated back to early Hylian times, but its surrounding wall and gate were constructed in later years. The high arched entry and hand carved doors, designed by the royal architect, were much admired, and people came from all over the kingdom to pass through them when they were completed.

The castle's front gate was always heavily guarded against intruders, but people said that there were other ways to enter. Link's uncle apparently found a secret path that led from outside the walls to the inner garden. From there, Link must have sneaked by the sentries and walked right through the front doors.

Plants from the far reaches of the kingdom were transplanted in the garden courtyard that fronted Hyrule Castle. Fine marble tiles from the mountains lined the walk, and colorful Rosehedge and Orangecap bushes dotted the carpet of grass. Guards observed the garden from catwalks on the castle walls.

"Inside the Castle Walls Inside Hyrule Castle, fires burned brightly in many Torches. A central staircase led up to the throne room, and labyrinth-like hallways led to other areas of the castle. All rooms, except the dungeon below, were elegantly furnished.

The hallways leading to the dungeon were cold, stark and closely guarded."

"The castle basement was a maze of dark tunnels the eventually led to a secret exit. Snakes slithered in the darkness, and huge rats scurried about, making the halls a treacherous trip. Only people who were very desperate dared to use this route.

The last room before Sanctuary was puzzling. There were two switches on the wall. One opened the door to allow access to the Sanctuary, the other brought disaster. Anyone wanting to continue through the door had to decide which was the safe switch."

The Return: The Castle Tower

"Sahasrahla dared Link to retrieve three Pendants of Virtue. Each was guarded by a fierce creature, so the challenge was not to be taken lightly. Sahasrahla rewarded him when he returned with the first Pendants by telling him about the Master Sword, which only a proven adventurer could wield. Once armed with the Master Sword, Link could challenge Agahnim in the Castle Tower.

A Shrouded Maze. According to the legend, Princess Zelda was taken by Agahnim to the top of the Hyrule Castle Tower. In the darkened halls there, enemies attacked without warning. Many a would-be rescuer fell victim to their ambushes, but those who used their Lantern could light the room to face their foes. Agahnim was said to practice his evil magic at the top of the tower.

The entrance to the castle tower was sealed with a force field that only the Master Sword could break."

You can expect to encounter these while you are within the Castle grounds.

The best way to kill him is to grab one jar from the set of three jars and go and throw it at him. After two hits he will be dead. Get the Big Key that he leaves behind and rescue Princess Zelda.

The first time Link encounters Agahnim is during A Link to the Past when, after retrieving the master sword, he is contacted telepathically by princess Zelda's plea for help. After going to the sanctuary and finding the dying sage, Link returns to Hyrule Castle,and ascends the tower, only to find Agahnim completing the sacrificial ritual. Overcome by anger Link battles Agahnim. Once Agahnim realizes he has lost, and that he is close to death, he uses the now open gate to draw Link into the Dark World, making his escape.

You will need either the Master Sword or, oddly, the Bug Catching Net.

After some trash talking from Agahnim, the battle will begin. In order to defeat Agahnim, you must use his own power against him. He will go around the room shooting different things out at you. He shoots three things. One, if he shoots a blue circle that looks like a necklace at you, just dodge it. When he is at the top-center of the screen go to either the left or the right side of the screen. If he faces you then be ready to deflect. If he is facing straight down he will shoot lightning. Just stay out of the way. The third thing he will shoot is a small glowing ball at you. Use the master sword to deflect it back at him. After a couple of hits, he will be history.

The Fighter's Sword is the sword that is given at the very beginning of the game after breaking into the castle via a secret passage and finding Link's uncle losing consciousness.

After a brief scolding, his uncle will give Link the sword that was used in the failed attempt at breaching the castle. This is one of the weakest weapons in the game, in addition to being the easiest weapon to obtain the first time.

While exploring the Castle Dungeon looking for Zelda at the beginning of the game, you'll come across a treasure chest, and it has the Boomerang. It can stun enemies and pick up objects like Hearts and bring them back to you.

A Link to the Past Dungeons[edit][hide][show]
Retrieved from "https://www.zeldadungeon.net/wiki/index.php?title=Hyrule_Castle_(A_Link_to_the_Past)&oldid=305290"
Categories: