From Zelda Dungeon Wiki
Jump to navigation Jump to search
Want an adless experience? Log in or Create an account.
Bug Net 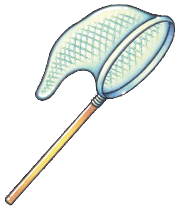 Artwork of the Bug Net from A Link to the Past

The Bug Net, also known as the Bug-Catching Net, is a recurring item in The Legend of Zelda series. It can be used to catch all sorts of things, like Bugs and Fairies.

"Bug-Catching Net
There is a sick boy resting in the house just to the north of the Inn. This boy has a Bug-Catching Net which he will give to Link to use. In order to receive the Net from the boy, Link must have at least one Bottle in his possession."

"Link can use the Bug-Catching Net to capture a variety of flying creatures. Catch and release them or put them I an empty Bottle for future use."

The Bug-Catching Net is obtained in A Link to the Past by talking to the sick little boy who is bedridden in Kakariko Village. He can no longer use it because of his cold, and he lends the Bug-Catching Net to Link to use it for the duration of the game. However, before Link can receive the net, he needs to have at least one Bottle. It can be used to catch fairies or Bees which can then be put into Bottles for a later use.

In the Game Boy Advance port, the Bug-Catching Net is required to obtain the solutions for Q. Bumpkin's Riddle Quest. This requires an active Four Swords file with 10 Medals of Courage on the same cart.

Making a return from A Link to the Past, the Bug Net can be obtained yet again in Skyward Sword. This nifty item allows Link to catch Blessed Butterflies and other insects, as long as Link approaches the Bug slowly. Otherwise, if Link flails it around, he will scare the bug, and it will move away from him and out of that area. Any insect Link catches can be used to upgrade any potions he has.

Link can buy the Bug Net from Beedle's Air Shop for 50 Rupees.

The Bug Net can later be upgraded to the Big Bug Net.

The Net is used once again to catch bees around Hyrule and Lorule. It is given to Link when he talks to the Bee Guy with a bottle somewhere in his inventory. It can be used to catch not just bees but other things such as Fairies and Recovery Hearts. It also can be used to pick up Apples from the ground like in A Link to the Past. When Link completes the advanced course of Treacherous Tower a second time, the Devilish Girl gives him the Super Net. The Net can now deal eight times the damage, turning the net into a well damaging weapon.