From Zelda Dungeon Wiki
Jump to navigation Jump to search
Want an adless experience? Log in or Create an account.
Bombos Medallion 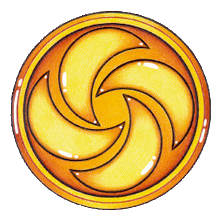 The Bombos Medallion is an item in A Link to the Past and Four Swords Adventures. It can be used to defeat many enemies at once.

"Bombos
The ancient Hylians built giant monoliths which were meant to instruct the Hero about very special magic spells. The Bombos monolith was placed on a cliff above the entrance to the Great Desert. By activating the Bombos Medallion, Link can create a large explosion around himself which will defeat a group of enemies. "

The Bombos Medallion is the only medallion not required to complete the game, but - although it consumes a large amount of Magic Power - one use can defeat all the enemies on the current screen.

To acquire the Bombos Medallion, head towards the swamp in Dark World and use the Magic Mirror to appear on a cliff in the Desert in Light World. Go left one screen and use the Book of Mudora to read the tablet.

In Four Swords Adventures, the Bombos Medallion is a rare item, appearing only on two stages: Death Mountain Foothills and The Field. It can be used to destroy all enemies on the screen whenever Link drops it or throws it.[1] At Death Mountain Foothills, it is found inside an underground cave on a screen with numerous Buzz Blobs. On The Field stage, it appears during the mini-boss battle with several Soldiers, followed by two Ball and Chain Soldiers, and then a Chief Soldier and more Soldiers. It is within a hole that is initially hidden under a bush.