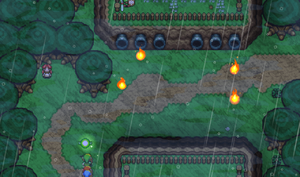 The Field is the first stage in the Near the Fields level of Four Swords Adventures.

The Field is not a very enemy-heavy stage, although the Links do face their fair share of danger. The Tingle Times volume 3 is found on a sign in the stage.[1] The area is very open and grassy, with many heavy logs that must be pushed, pulled, or lifted with more than one Link dotting the field. Many hidden holes are also found by using the Shovel. Some of them contain Force Gems, but others are completely empty.[2] A gravesite housing the ancestors of the field's inhabitants can be found to the north as well, with several old gravestones in the area.[3]

One unique feature of the field is the Big Bomb. When the Links enter the area, the fuse lights and begins to burn out.[4] They must press down all four switches in order to leave. If they are still on the screen when the bomb explodes, the immediately die.

The Field is also the only stage to feature Epona. After rescuing Malon, Talon allows the Links to borrow his horses by using Carrots.[5] The horses make the Links invincible. Carrots are hidden in grass or sometimes found just lying on the ground during the first portion of the stage.

The Boomerang, Magic Hammer, Pegasus Boots, Bow, Shovel, and Roc's Feather can all be found in The Field. Only the Shovel, Pegasus Boots, and Bow are necessary. The Boomerang and Magic Hammer are first found in Malon and Talon's storeroom, an underground area south of their house. Talon tells them to take whatever they want, because they do not use them.[6] Roc's Feather is in a large house in the center of the mini-boss area, toward the end of the stage.

The Pegasus Boots are found next in a storage shed belonging to two men that live in The Field. The younger one asks the Links to destroy the Gohma outside.[7] If they accept, he gives them a Small Key to open the storage shed.[8] Inside, they find Boomerangs and Pegasus Boots. The Boots can then be used to access the graveyard, where the Bow, a weapon capable of killing the monsters, lies hidden.[9] However, the Pegasus Boots must first be blessed by the Great Fairy. After defeating the Gohma, the man gives them a Shovel so they can find the secret passage to the next stage.[10]

Two Force Fairies are hidden in the stage. The first is found under a piece of grass to the right of Malon and Talon's home. The other is in an area just southwest of where the Links find Epona.

An extra Heart Container is available in an underground chest by Malon's house. By lifting the Links over a fence in the southeast, they can fall into the storeroom and stand on a switch that opens the way to the chest.[11]

The Bombos Medallion is a rare item, found during the mini-boss battle. It can be used to kill all of the enemies on the screen. In order to find it, the Links must cut down a bush to reveal a hidden hole. Inside are two treasure chests: one with a red Force Gem, and the other with the medallion.

There are two Small Keys in The Field. When the young man asks the Links to kill the Gohma around the area, he gives them the first Small Key so that they can access the storage shed.[8] He claims that it contains items capable of killing the monsters, although it does not. The shed is found in the east.

The next is at the entrance to the graveyard. After entering, they find a locked door, and upon walking west, they locate the key, concealed behind multiple blocks. By pushing the blocks aside they can get the key and unlock the door.

Soldiers and Zols are the most common in this stage. The Soldiers appear most frequently in the first half of the stage, while guiding Malon and riding Epona. Gohma only roam the northern section of the stage, and Green Zols only appear right before the mini-boss at the end in groups of four.

The Links encounter four Shadow Links. Two are found in an area with a Gohma, Big Green Force Gem, and a large log. They jump around to avoid the heroes. The other two have Pegasus Boots and are found above the area with the Gohma, where the Pegasus Boots are needed. They charge into the wall and become dizzy for running away.

The mini-boss of the Field is found at the very end of the stage, only one screen before the boss. The area where it occurs is wide and open, with some holes hidden underneath bushes, and a large house is situated in the center. The house contains many pots, as well a pair of Roc's Feathers and Bows. The mini-boss has three stages. At first, the Links only find many green Soldiers to battle with. After they are defeated, two Ball and Chain Soldiers appear. If their chains hit the house, it will be destroyed. Then, an army of soldiers accompanied by a Chief Soldier materialize, and they must be defeated to obtain Force Gems and passage to the boss area. A Bombos Medallion can be found in one of the hidden holes to help with the battle.

The boss of The Field is a Big Dark Stalfos, the possessed form of the Blue Knight of Hyrule. The knight was attacked by a dark force and turned into this monstrosity. Upon entering the area, they find only two Stalfos, but after defeating them, they are taken into the Dark World where they can finally defeat the Big Dark Stalfos and break the curse.

Once freed from the evil, the Knight of Hyrule thanks them and apologizes before giving them the Blue Royal Jewel.[12]

Malon is the first person the heroes encounter in the stage, where she is standing by herself out in the rain.[13] When the Green Maiden points this out, Malon sees her appear in fairy form and asks them to accompany her back home.[14] Upon returning her, Talon is happy to see her.[15] Malon notes the odd behavior of the soldiers, and Talon agrees that it is strange.[16][17]

Talon then thanks the Links by telling them that they can use their horses.[5] He also allows them to use any of the items in their storeroom.[6] Malon thanks them one last time.[18]

Two other inhabitants are found in a house in the northwest of The Field. The younger man wishes that he had a weapon to fight the Gohma with, and he asks the Links to defeat them for him.[7] If they agree, he gives them a key to his storage shed, where he claims there are weapons they can use.[8] However, the old man scoffs at his younger companion, saying that the only weapon capable of slaying the Gohmas is at his ancestors' gravesite, which is currently blocked off.[9]

Fortunately, Link can use the Pegasus Boots within the shed to reach the gravesite and obtain the Bow. After killing the Gohma, the young man thanks them and tells them about a passage leading to Hyrule Castle.[19] He gives them a Shovel to dig up the passage and suggests that they take it to the Great Fairy if they have trouble finding it.[10]

A Great Fairy lives in an underground cavern. She makes an item more powerful.[20] In order to obtain the Bow required to defeat the Gohma, the Links must level up their Pegasus Boots in her fountain.