From Zelda Dungeon Wiki
Jump to navigation Jump to search
Want an adless experience? Log in or Create an account.
Boomerang 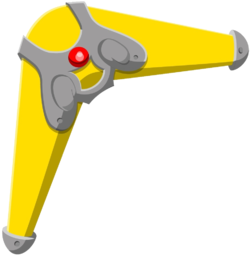 Boomerangs are recurring items in The Legend of Zelda series. They work by returning to Link after he has thrown them every time, making them very versatile. They can be used in many different ways, such as picking up items, or stun and even defeat enemies, or to hit distant switches, and much more.

The Boomerang makes its debut in The Legend of Zelda. Link can use it by assigning it to the B Slot and pressing that button to throw it. It can damage smaller enemies,[1] such as Keese, and stun all other enemies,[2] like Goriyas. After being thrown, it only travels half the screen, making it very inconvenient. It is found in the first dungeon of the game, The Eagle. Later on in the game, Link gets an upgrade to the Boomerang, entitled the Magical Boomerang. This upgrade is found in the second dungeon, The Moon. It travels much further than the original Boomerang,[3] making it a much better weapon in combat.

"Boomerang
The Boomerang has weak destructive power, but it has the ability to stun most enemies for a short period of time. The Boomerang is the item of choice when walking about Hyrule because you can use it to quickly retrieve items such as Hearts, Rupees, Arrows and Bombs."

"Link can't throw the Blue Boomerang too far, but he'll be able to retrieve items within a short distance."

In A Link to the Past, the Boomerang can be found in Hyrule Castle. It does the same thing it did in The Legend of Zelda: paralyze enemies and bring items from afar. It also has an upgrade, a red version, which can make the rounds launched by pressing the D-Pad. In the GBA version, the Boomerang can do things that it previously did not like mowing the lawn when released, etc.

In Link's Awakening, the Boomerang appears as the final item in the Trading Sequence. It is given to Link by the Secret Goriya at Toronbo Shores in exchange for the item on his B button.[4][5] However, he cannot accept certain items, such as the sword or shield.[6] If Link returns to the Goriya after trading for the Boomerang, he begs to have it back and offers Link's old item.[7]

With the Boomerang, Link can easily defeat several enemies that previously were much more difficult, such as DethI, the final form of The Shadow Nightmares, who can be defeated with one shot from the Boomerang.

The Boomerang in Ocarina of Time is very similar to Boomerangs from previous titles, except it is in 3D. It can stun enemies, grab stuff, etc. It can be found Inside Jabu-Jabu's Belly, the third Dungeon of the game. It is one of the many items Link loses the ability to use while in the future. The Hookshot replaces the Boomerang while Link is an adult, though it is much more useful, and much easier to control.

In Oracle of Seasons, the Boomerang can be obtained from the Subrosian Dance Hall in Subrosia after dancing with its inhabitants the correct pattern. Its uses are similar to Ocarina of Time's.

In Oracle of Ages, the Boomerang is obtained from the Goron Shooting Gallery in Rolling Ridge. Link must earn at least 400 points in the mini-game, at which point the owner gives Link the Boomerang.[8] It is not required to complete the game.

The Boomerang in The Wind Waker is the first one to be able to lock on to multiple targets at once; five to be exact. It is found in the Forbidden Woods. It can be obtained after defeating the mini-boss Mothula.

There are two Boomerangs in this game. The regular Boomerang works like in previous Zelda games and can be bought in Hyrule Town for 300 Rupees. The Magical Boomerang can be obtained after Tingle's sidequest and fusing Kinstones. It can be controlled with the D-Pad. It will be found in North Hyrule Field.

In Phantom Hourglass, Link receives the Boomerang in the first temple, the Temple of Fire. Instead of just launching the Boomerang as in previous Zelda titles, Link must draw a line on the screen of the Nintendo DS. The Boomerang will follow the same route of the line. If a torch is out and is next to a lighted torch, Link can route the torch lit and then extinguished the torch and it will cause the Boomerang catch fire and ignite the torch. This is one of several features that Boomerang can do in this game.

In Spirit Tracks, Link wins the Boomerang in the second temple, Snow Temple. To control the Boomerang, he can do the same thing as in Phantom Hourglass; draw a line on the bottom screen of the Nintendo DS, and it will follow the same route.

Often there are enemies that cannot be hit from the front, so Link must draw a path with the boomerang and hit the enemy on its backside in order to stun it. While some enemies can be defeated with one hit of the boomerang, many others will only be stunned. This will, however, give Link an opportunity to finish them off with his sword. The boomerang is also capable of equipping fire and ice along its way. If Link targets a lit torch and then an enemy, the boomerang will carry the fire and can burn the enemy that Link targets. Link can use the boomerang on ice torches and then send it over water, which will cause the water to freeze and ice platforms to appear that Link can walk over.

In A Link Between Worlds, the Boomerang is a rentable, and later purchasable item that can be found at any point in Ravio's Shop after completing the Eastern Palace. It can be used to stun enemies, cut grass, grab items, and flip switches, similarly to most other Zelda games. After purchasing it for 800 Rupees, it can be upgraded by Mother Maiamai by collecting ten baby Maiamai. This turns it into the Nice Boomerang, which functions the same, but with increased speed, and a triple throw.

The Boomerang appears as an available item in many stages, beginning with the first section of the Volcano, the Blazing Trail. Like in past games, it can be used to stun or defeat enemies, hit switches, and retrieve distant items, including other Links. The boomerang can also be used to transfer fire between torches, similarly to its use in Phantom Hourglass and Spirit Tracks. It can be upgraded by wearing the Boomeranger costume, which grants it increased range, size, and damage output, as well as the ability to carry two items at once.

The Boomerang makes a return in Breath of the Wild, but this time in many forms, including the standard Boomerang, Giant Boomerang, Lizal Boomerang, and more. This weapon can be used as a sword, through means of melee attacks, but can also be thrown like a traditional boomerang. If it hits a solid object, it will lose all momentum and drop to the ground. In order to retrieve a boomerang after it has been thrown, the player must hit the A button as it nears Link. In the case of this not happening, it will keep going for a small distance and drop to the ground, where it can be picked up. The standard Boomerang can be found in the Pumaag Nitae Shrine.

The Boomerang in Age of Calamity is used by Link in his One-Handed Weapon moveset.

The Boomerang is found early in both Level 2 of MAP1 and Level 2 of MAP2 by killing all the Goriyas in the second room of each dungeon. It stuns most basic enemies, but kills Keese and Gels outright; and can also be used to collect items out of reach.

In Hyrule Warriors, the Boomerang is a sub-weapon that can be unlocked in The Sorceress of the Valley scenario from Legend Mode. The Boomerang functions like it does in other Zelda games, stunning enemies and being a key weapon against Manhandla. If Link picks up a power-up for the Boomerang, it becomes the Gale Boomerang, sending out tornados that stun multiple enemies.