From Zelda Dungeon Wiki
Jump to navigation Jump to search
Want an adless experience? Log in or Create an account.
Mothula 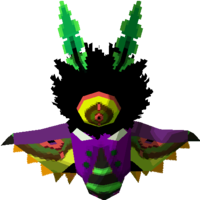 Mothula is a recurring enemy in The Legend of Zelda series. It first appeared in A Link to the Past as the Boss of Skull Woods.

Main article: Mothula (A Link to the Past)

Mothula made its original debut in A Link to the Past as the boss of Skull Woods, a dungeon in the Dark World.

Mothula is the boss of the third dungeon, Poison Moth's Lair, in Oracle of Seasons.

A Mothula appears in The Wind Waker as a mini-boss of the Forbidden Woods. To damage Mothula, Link must either use parry attacks or stun it with the Deku Leaf before using combo attacks with the sword. Link is rewarded the Boomerang for defeating the Mothula.