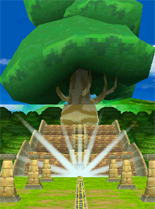 The Forest Temple (Wooded Temple in the European/Australian version) is the first Dungeon found in Spirit Tracks. It can be found in the northern region of the Forest Realm, just south of the Snow Realm. Link travels hear in order to restore the Spirit Tracks that lead from here to the Tower of Spirits. Anjean first directs Link to the Forest Sanctuary, in hope that he and the Lokomo of the Forest Realm, Gage, can correctly perform the Lokomo Song that will lead Link to the Temple. Link does find Gage, and after playing the song perfectly, he proceeds to the dungeon, ready for what may come his way.

The enemies that Link will encounter as he travels through the Forest Temple are some of the most basic in the game; fitting considering it is the first Dungeon. Listed below are all the enemies.

The Mini-Boss of the Forest Temple is known as Mothula. It is a recurring enemy in the Legend of Zelda series, having being featured in three games before it, including A Link to the Past, Oracle of Seasons, and The Wind Waker.

The Boss of the Forest Temple is known as Stagnox, Armored Colossus. It is basically a giant beetle, that can be attacked by hitting its tail with Link's sword. Killing it will reward Link with a Force Gem that opens the way back to the Tower of Spirits.