From Zelda Dungeon Wiki
Jump to navigation Jump to search
Want an adless experience? Log in or Create an account.
Howling Stone 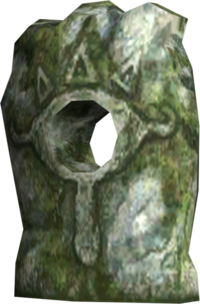 Howling Stones are rocks from Twilight Princess where Link can howl as a wolf. There are seven total. All are used to sing duets with the Hero's Spirit and learn the location of the Hidden Skills, except for the one in the Sacred Grove, where Link howls Zelda's Lullaby. All of the songs from Howling Stones are from previous games in the series, aside from the very last one.

When Link howls at one of these stones, he is transported to a Ghostly Ether location, where the Hero's Spirit's Golden Wolf form is. He must howl the song a second time and then perform a duet. Once he finishes and returns to Hyrule, a symbol of the mystical wolf will appear on his map. If he goes to this symbol, he can learn a Hidden Skill.

[There is no howling stone for the ending blow, you just run into the golden wolf before you enter the forest temple]