From Zelda Dungeon Wiki
Jump to navigation Jump to search
Want an adless experience? Log in or Create an account.
Zelda's Lullaby 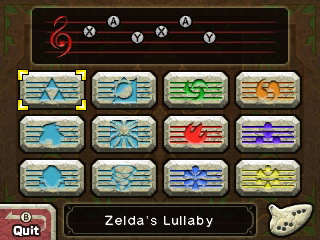 Zelda's Lullaby is one of the most reoccurring songs in The Legend of Zelda series. It is most often used as Zelda's theme song whenever she makes an appearance, often only the first time. It is also known as the melody of the Hyrule Royal Family. The song is only playable in Ocarina of Time and Twilight Princess with the Fairy Ocarina or the Ocarina of Time and Howling Stones respectively.

In A Link to the Past, the song mostly serves as background music when Link meets Princess Zelda for the first time. It also plays whenever Link rescues one of the Seven Maidens after defeating each of the Dark World Dungeons. The song is not known as Zelda's Lullaby in A Link to the Past, however, the notes are the same, so it is safe to assume that Zelda's Lullaby can also be known as Zelda's Theme.

Zelda's Lullaby gets its name from Ocarina of Time. When Link learns the song from Impa, she informs him that it is a sacred song passed down throughout the generations in the Royal Family of Hyrule and that it served as Zelda's Lullaby when she was young. This song is one of the most important in the game, as it is used frequently to gain access to new areas. The first time Link must play it is to gain entrance to Darunia's chambers in Goron City on Death Mountain. The next time is to get through the waterfall outside Zora's Domain. It is used in the Water Temple to change the level of the water. It is used in the Shadow Temple to start the boat moving. It is required in the Spirit Temple to open a sealed door. Link is also required to play it to summon the Great Fairies in the Great Fairy Fountains. Additionally, Link can play this song to repair broken signs.

Zelda's Lullaby is also used to show affiliation with the Royal Family, as seen when Link gains access to Darunia's chambers in Goron City.

In Majora's Mask, there are only a few appearances of this song. The first time is when Link retrieves the Ocarina of Time from Skull Kid. Link has a flashback where he remembers Princess Zelda giving him the Ocarina of Time and learning the Song of Time. During the flashback, the song that plays in the background is Zelda's Lullaby or Zelda's Theme. The song can also occasionally appear in the northern part of Termina Field on the wall where Link can play a song for some Rupees.

In The Wind Waker, Zelda's Lullaby only appears as background music. The first appearance is where Tetra is revealed to be Princess Zelda in the basement of Hyrule Castle. The only other appearance of the song is during the ending credits in parts of the complete ending theme.

In Twilight Princess, Link must play the song as a wolf to gain access to the Sacred Grove. On the first time playing the song, Skull Kid appears. After defeating Skull Kid and entering the newly opened path, Link must then play the song again to awaken the guardian statues and complete their puzzle. Finally, Link can enter the chamber where the Master Sword waits for him.

The song also appears as background music during several scenes with Princess Zelda herself.

In Skyward Sword, Zelda's Lullaby does not appear in game, but the song can be heard by reversing the Ballad of the Goddess. This was discovered very soon after a trailer for Skyward Sword was released featuring the song and was said to be put in as an easter egg for previous players of the franchise.