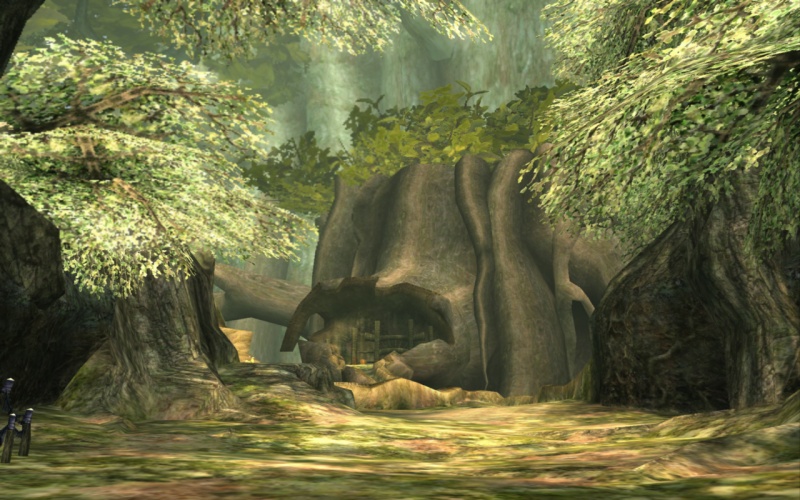 The Faron Woods is a wooded location seen in Twilight Princess, Skyward Sword, and Breath of the Wild.

In Twilight Princess, Faron Woods is situated just to the north of the Ordona Province and is linked by a bridge that connects the two provinces. The woods are watched over by the guardian Light Spirit, Faron. The first dungeon of the game, the Forest Temple, is located at the deepest part of the Faron Woods. Common enemies that can be found in this area include Bokoblins, Deku Babas and Keese.

During the events of Twilight Princess, Link first enters the woods after Talo goes off in pursuit of the Monkey, who had previously stolen Uli's Cradle. In this sequence, Link briefly passes through the southern section of the woods. Here, Link talks to Coro, who gives him a free Lantern.[1] When continuing on through the cave, Link passes through the northern section where he finds a Small Key, allowing him access towards the Forest Temple. Once reaching the entrance of the temple, Link finds Talo and the Monkey in a cage with a Bokoblin guarding the area.

Later on, in the first section of the game, Link has to restore light to Faron Province,[2] as now the Shadow Beasts have stolen the light from the Light Spirit, Faron.[3] Link is tasked with capturing sixteen Tears of Light by Faron, which are scattered across the woods.[4] Once the light has been restored to the province, Link, now in Hylian form, is able to advance into the Forest Temple. Upon arriving, Link is seemingly attacked by a Golden Wolf. This is in fact the Hero's Spirit, who, throughout the events of the game, teaches Link certain skills. The first Hidden Skill he teaches Link is the Ending Blow and is the only compulsory skill that Link has to learn.

When Link first enters Eldin Province, he and Midna notice that the bridge is missing, which previously connected the two sides of the Gorge.[5] Link, at Midna's request,[6] has to warp back to Faron Woods in order to investigate. The bridge is conveniently located near the warp point, so Link uses Midna's powers to return the bridge to Kakariko Gorge.

During the latter part of the game, Link has to find the six missing Sky Characters scattered across Hyrule. One of the characters is hidden within the southern section of Faron Woods. After this section of the game, there is no need to return to Faron Woods to progress.

This area is split up into three sections; the northern section, southern section and the Faron Swamp. South Faron Woods is home to the Faron Spring as well as Coro's Lantern shop. It is also home to one of the six Sky Characters hidden across Hyrule. The North section is mainly deserted and it is home to Trill's shop as well as connecting to the Forest Temple and the Sacred Grove. The middle section is home to a swamp area. Earlier on in the game, during the prologue, Link has to find a key here in order to advance to North Faron Woods. However, later on in the game, the swamp is filled with a poisonous purple fog, changing the dynamic of the area. 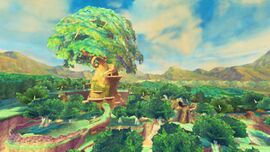 In Skyward Sword, it is one of the four major regions of the game (the others are The Sky, Eldin Volcano and Lanayru Desert). It is the first major region Link visits while searching for Zelda. Faron Woods covers most of the Faron Province. The Kikwi inhabit the Faron Woods. It connects to the Sealed Grounds, Lake Floria and Deep Woods. The Water Dragon protects the Faron Woods along with the surrounding areas. Many species of flora and mushrooms thrive throughout the region due to the many water sources such as Lake Floria. The Great Tree towers over Faron Woods.

Faron Woods is a minor location in Breath of the Wild.