From Zelda Dungeon Wiki
Jump to navigation Jump to search
Want an adless experience? Log in or Create an account.
Lakebed Temple 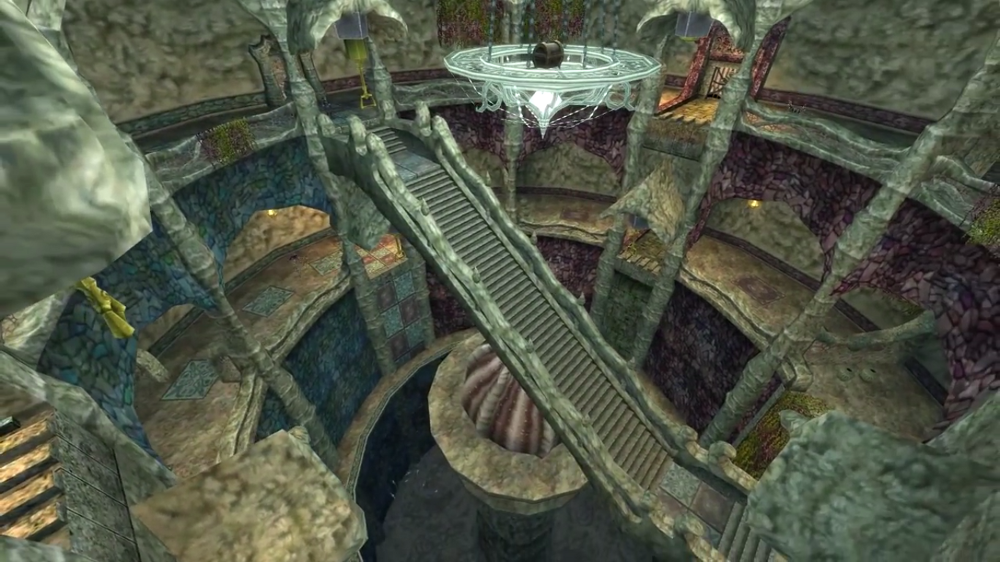 The Lakebed Temple is the third Dungeon in Twilight Princess. It is located at the bottom of Lake Hylia.[3] It is a water-themed dungeon, much like that of the Water Temple from Ocarina of Time. The temple used to be a place of worship for the Zora, and was called the Zora Temple.[4] However, at some point in time, it was infested with monsters.[5] The Zora were forced to flee the temple and seal the monsters inside, in order to stop the darkness from reaching others.[6]

In order to gain access to the Lakebed Temple, Link needs to obtain several items, including: Water Bombs, the Iron Boots, and the Zora Armor. Link requires access to the temple when in search for the third and final Fused Shadow, as directed by the Light Spirit Lanayru, which is located in the dungeon.[7]

Due to the dark evil lurking within the temples depths, the entrance was sealed. However, Link can use Water Bombs to gain entrance into the dungeon. There are no friendly inhabitants in this dungeon, unlike the first two dungeons of Twilight Princess, so Link spends the entire duration of the temple focused on solving puzzles and defeating enemies. While Link is searching the dungeon, he eventually finds himself trapped in a room with the Mini-Boss of the dungeon, the Deku Toad. After defeating it, Link is rewarded with the Clawshot.[2] With the Clawshot in hand, Link can now travel deeper into the dungeon, which leads him to the Big Key. This key opens the locked door that is found in the middle of the main room of the dungeon. Inside, Link encounters Morpheel, whom is the embodiment of the piece of the Fused Shadow. Once Link defeats this beast, he can collects the final Fused Shadow.[8]

Here is a list of all the enemies that Link encounters as he travels through the Lakebed Temple in search of the final Fused Shadow: 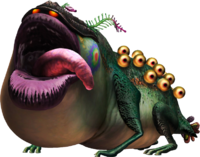 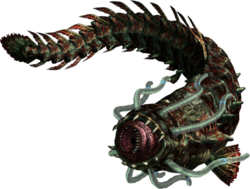 The Boss of the Lakebed Temple is known as the Twilit Aquatic: Morpheel.[1] It is a large sea-serpent type enemy with scales as hard as rock for skin.[9] As can be expected with Twilight Princess bosses, the weak spot of Morpheel is an eye that has a nice little spot on the top of its head. The battle takes place in a large cylinder room that is completely underwater, so wearing the Zora Armor is a must.[10] Link must attack the eye with his sword a number of times.[11] Once he has done enough damage, he can perform the Ending Blow on it, killing Morpheel. Morpheel then goes into a frenzy, smashing into all the pillars that surround the area. It then collides into one of the side walls, creating a hole into which all the water in the area escapes through. Morpheel then explodes, and its remains come together and become the final Fused Shadow.[8]

Throughout the Lakebed Temple, Link is able to find four items that help him on his way through the temple. These items are the Dungeon Map, the Compass, the Big Key, and the Small Keys.

The Dungeon Map is basically its name: a map of the entire dungeon. This is very helpful to Link as he travels through the dungeon. It is found in a chest that is in the main room with the movable staircase. The first time Link enters this room he can get the map, by simply adjusting and re-adjusting the staircase so he can search every corner of this room. Eventually he finds the chest and acquires the Dungeon Map.

The Compass is a standard for dungeons in Twilight Princess. It has a very useful function: it shows Link the location of every Treasure Chest in the dungeon, as well as the location of the boss. It lies in a chest on the fourth floor. Right before activating the second switch that releases water to the temple, Link can use the Clawshot to get to the other side of the fence. On the other side lies the chest that contains the Compass.

The Big Key is the key that allows Link to open the door to the Boss Chamber, where the boss of the Lakebed Temple, Morpheel, can be found. It can be found in a chest in the room that is at the farthest right of the dungeon on the second floor.

Throughout Link's journey through the Lakebed Temple, he must collect three Small Keys. These keys are used to unlock locked doors that prevent Link from finishing the dungeon and finding that final Fused Shadow. Without collecting the keys, it is impossible to complete the dungeon.

Throughout the Lakebed Temple, there are twenty-six total Treasure Chests that are accessible to Link. All of these chests contain useful items, including Rupees, Dungeon Items, Pieces of Heart, Equipment, and Regular Items.

All four dungeon items are found in Treasure Chests that span the entire Lakebed Temple. The Dungeon Map is, the Compass is, the Big Key is, and all three Small Keys are as well. These items can make traversing this dungeon a lot less difficult than it would be without them.

As with every dungeon in Twilight Princess, there are two Pieces of Heart to be found in this dungeon. The first one requires the Clawshot to acquire in the Lakebed Column Hub (1F to 2F), while the second one requires both water switches to be activated and the Clawshot in the Single Cog Cavern (F1).

A single chest in the Lakebed Temple carries equipment. This chest contains the dungeon item, the Clawshot. It is acquired after defeating the mini-boss, the Deku Toad, who spits out the chest right before it dies.

If Link opens all the Treasure Chests that contain Bombs, he would acquire a total of 50 Bombs. One chest holds 20 Bombs, two hold 10 Bombs, and the last two hold 5 Bombs. Most of these chests are found at the beginning of the dungeon, mostly serving as a hint that he can use Bomb Arrows on the hanging blocks of stone that when knocked down can act as a stepladder of sorts, as most allow Link to climb on top of them so he can reach a higher ledge.

In total, there are 35 Water Bombs available for Link to collect in the Lakebed Temple. Three chests hold 10 Water Bombs, while the final one holds 5 Water Bombs. Because the Lakebed Temple is a water-themed dungeon, there are going to be quite a few times where Link is underwater. The Water Bombs are the only item that Link can use to destroy boulders that are blocking his way underwater. Without Water Bombs, Link cannot gain access to the room where the Deku Toad lies, thus rendering the dungeon and game unbeatable.

Last, but not least, are the Arrows. If Link opens the two chests that contains arrows, he can collect 40 arrows. Both of the chests that hold arrows are located near the beginning of the dungeon. Also, both chests hold 20 Arrows. They are a hint to Link that he has to use Bomb Arrows in the immediate area.