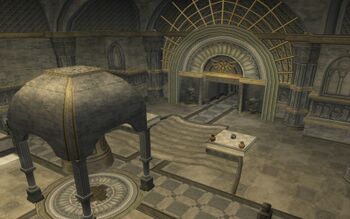 The Temple of Time is the sixth dungeon in Twilight Princess. It is situated within the Sacred Grove, a place deep within Faron Woods. The grounds where the original temple once stood have become abandoned and left in ruins. The actual temple that Link visits is in the past, and beyond the stained glass windows lies the inner section of the temple. Many traps and puzzles that Link must overcome lie in the dungeon.

Upon Link's entrance to the Temple of Time, he discovers a large door that is locked up. On either side, there is a nice spot for an ancient statue to go. On the left (Wii) side there is a statue. However, on the right side there isn't a statue. Link travels all the way to the eighth floor of the dungeon in search of this statue. On the eighth floor, he sees the statue, which is being guarded by a Darknut. After defeating the Darknut, the Mini-Boss of the Dungeon, he collects the Dominion Rod, which he can use to guide the Ancient Statue back to its spot on the first floor. He then proceeds to search the rooms found behind the large door, which is now unlocked. He enters the room where the Mirror Shard is said to be, and meets up with Armogohma, the Boss of the Temple of Time. 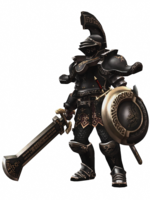 The Mini-Boss of the Temple of Time is known as a Darknut. This Darknut appears to be guarding the Ancient Statue that Link needs to reach the Mirror Shard. Link must fight the Darknut in order to not only get the statue, but to also get the Dominion Rod, the only item Link can use to guide the statue all the way to the first floor. The battle against the Darknut is a classic Sword-and-Shield battle, where Link must use all his skills in sword fighting to best the Darknut. After defeating the Darknut, Link can collect the Dominion Rod and the Ancient Statue as a reward. This is the first of many Darknuts Link has to encounter in the game, as he encounters several more in the latter stages of his quest, especially in the final dungeon of the game, Hyrule Castle. 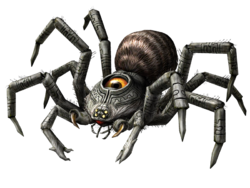 The Boss of the Temple of Time is known as the Twilit Arachnid: Armogohma. It is a very large spider that dwells deep within the Temple of Time. It is very similar to a previous enemy in The Legend of Zelda series, a Gohma. It is guarding the third Mirror Shard, which Link is there to collect. Defeating Armogohma in both of the two phases of the battle rewards Link with the third Mirror Shard, which means he only has one Shard to go before the Mirror of Twilight is fully restored.

All four of the standard Dungeon Items that are found in Twilight Princess dungeons can be found in the Temple of Time. These include the Dungeon Map, the Compass, the Big Key, and the three Small Keys.

The Dungeon Map is basically a map of the entire dungeon. It is very useful if Link gets lost while searching through the Temple of Time. It is found in a Treasure Chest on the second floor. This chest is hidden and does not appear until Link has defeated an Armos.

The Big Key is used to unlock the door that leads to the Boss Chamber, where Armogohma lies. It can be acquired by opening up a Treasure Chest on the seventh floor, in a room with an Armos and two Helmasaurs. Link needs to press down on each of the four switch in the room to open the gate that blocks the way to the chest.

There are three Small Keys located within the Temple of Time that Link can collect. These keys are used to unlock doors that previously blocked Link's progress through the Dungeon. All three are found in a Treasure Chest.

In total, there are sixteen Treasure Chests that are hidden throughout the Temple of Time. Link can open these chests to acquire a variety of different items, including Rupees, Dungeon Items, Equipment, Regular Items, and Pieces of Heart.

Of the sixteen Treasure Chests located in the Temple of Time, six of them contain any amount of Rupees. Four of the six chests carry a Red Rupee, which in Twilight Princess is worth 20 Rupees. The final two chests both carry a single Purple Rupee, which is worth 50 Rupees.

There are 6 chests in the Temple of Time that contain Dungeon Items. They hold the Dungeon Map, the Compass, the Big Key, and all three Small Keys.

There is only one chest in the Temple of Time that contains any form of Equipment. It can be found on the eighth floor, and contains the Dominion Rod. It can be opened after Link has defeated the Mini-Boss of the dungeon, a Darknut.

There is but a single Treasure Chest located in the Temple of Time that contains Regular Items. It holds 30 Arrows, which can be used alongside the Hero's Bow to shoot faraway items and enemies.

There are two hidden Pieces of Heart located in the Temple of Time. The first Piece of Heart requires the Dominion Rod to get in the chamber with moving hallways. The second one requires the Spinner.