From Zelda Dungeon Wiki
Jump to navigation Jump to search
Want an adless experience? Log in or Create an account.
Baby Gohma 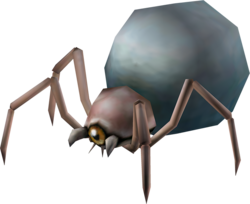 Baby Gohma are found in large groups in the game Twilight Princess. There are only found in the Temple of Time, and during the final phase of the Armogohma battle. They run around wildly, forcing Link to chase after them in order to kill them. They will only attack Link from behind, when he faces towards them they will try to run away from him.

To make these little bugs an easy fight, use Bombs, Bomb Arrows, or another targeted attack, like the Clawshot. In closed areas, a spin attack is also very effective. The only thing Link definitely doesn't want is obviously to just use normal sword slashes because they will attack him from behind. He can actually use this skill against them, with the Spinner. Even when he is using Spinner they will try to attack him. The Spinner will always kill it with just one hit, so it's a safe and fast method of killing a whole bunch of them.