From Zelda Dungeon Wiki
Jump to navigation Jump to search
Want an adless experience? Log in or Create an account.
Phantom Hourglass Fishing 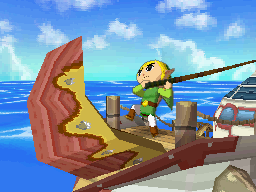 Fishing is a Side Quest featured in Phantom Hourglass.

Get the Fishing Rod

Sail over to Bannan Island, the large island at the northeast part of the Northwest Quadrant. Enter the lone hut that is on this island and speak with the Old Wayfarer. He will explain to you that he is in search of a mermaid.

Back outside, defeat all of the enemies that are on the island and then carefully walk along the perimeter of the island, glancing at the water in search of a nearby mermaid. If Link comes to close, the mermaid will dive underwater. If she does so, enter the building and head back outside to reset the mermaid. Once you see her, use the Boomerang to stretch out a pathway from a distance and strike the mermaid.

Once you hit the mermaid, she will yell at you and demand an apology. After you tell her of the Old Wayfarer, she states that she is going to go to the hut and visit him. You can then go back and speak with the Old Wayfarer and let him know that you have found the mermaid.

Now that you have the Fishing Rod you'll notice a symbol of a fish on your map. Set sail so that your boat overlaps with the fish symbol. At this point, click Menu and then Fish to begin fishing.

Once Link tosses the fishing line out, wait until the fish grabs on and then quickly pull back on the rod. Pull back on the line with the stylus and always pull in the opposite direction of the fish. If it is on the left side, pull towards the bottom-right, and if it is on the right side, pull towards the bottom-left. Once the meter on the left is in the green, you can use the stylus to quickly sketch small circles, causing Link to start reeling in the fish.

Be sure to keep an eye out on the meter to the left. If it drops close to the red, stop reeling in and instead just pull back once again. If the fish jumps at anytime, quickly release the stylus and wait until it falls back into the water. Keep up this process until the fish has been caught.

The first fish Link can catch is a small Skippyjack. As soon as he catches the fish, he can take it back to the Old Wayfarer, but he does not reward Link for it. Link can also catch a Toona and a much larger Loovar. These fish move left and right much more often and will also jump out of the water quite frequently. Reel them in the same way you did the Skippyjack.

Once you have caught a Loovar, make your way back to Bannan Island and speak with the Old Wayfarer. After showing him the Loovar, he will reward Link with the Big Catch Lure. This will now allow Link to find even bigger fish on the Great Sea.

Return to the Great Sea and with your new Big Catch Lure, attempt to catch the large Rusty Swordfish. It is completely random whether you will find a Toona, Loovar, or a Rusty Swordfish, so just keep at it. The Rusty Swordfish is even more aggressive than the Loovar and will take some time to reel in.

Once you have caught the Rusty Swordfish, return once again to Bannan Island and speak with the Old Wayfarer. As a reward for catching the fish, he will give you a Ship Part. He then talks about the legendary fish, Neptoona which will now occasionally appear on the Great sea.

While riding on the great sea a second fish symbol will now occasionally appear. This one is a large symbol that resembles a swordfish. The symbol does not appear often and when it does, it moves rather quickly. It seem that the more regular fish you catch, the more of a chance the swordfish appears. However, you could be waiting for quite sometime before this swordfish appears. It may be a good idea to just advance in the quest and get this fish whenever you happen to see a swordfish on your map. If you do see the symbol pop up, quickly try to intersect it and begin fishing. You may encounter another Rusty Swordfish, but if you are lucky, you will encounter the legendary Neptoona. It could take a number of tries before you end up bumping into Neptoona.

When you finally run into Neptoona, you will find that it is even more challenging to catch than the Rusty Swordfish. Neptoona looks very similar to a swordfish, except it has a darker color. Neptoona is larger and will jump out of the water more often. Slowly reel in the legendary fish and take him to the Old Wayfarer. He will reward Link with a Heart Container.

There is one bonus tiny fish known as a Stowfish. When you capture a Rusty Swordfish or a Loovar, there is a chance there is a Stowfish attached to the larger fish you catch. If you do happen to catch a Stowfish, you can take it back to the Old Wayfarer and he will give you another ship part.