This is a list of bosses found in Oracle of Seasons.

Aquamentus is a boss that is encountered in Gnarled Root Dungeon. It is portrayed as a large, green, horned dragon with small wings. It attacks Link by breathing three fire rings in three different directions at him. Aquamentus can also attack him by charging at Link in an attempt to impale him with its horn. In order for Link to defeat the dragon, he must use the sword or bombs to attack its only vulnerable spot, the horn on its head.

Dodongo is a boss encountered in Snake's Remains. Like its predecessor, it is a slow, brown Triceratops with spikes running along the top of its body. Dodongo will momentarily open its mouth while wondering around the room, trying to breathe out a series of fireballs in Link's direction. When this happens, Link should toss a bomb into its mouth, making Dodongo eat the bomb. When the bomb explodes, it will inflate Dodongo, and it will be unable to move for a short time. With the strength from the Power Bracelet, Link can then pick it up and throw the boss onto the Spiked Floor. After being thrown onto the Spiked Floor a total of four times, Dodongo will be defeated.

Mothula is a boss that is encountered in Poison Moth's Lair. After a short period of time, Mothula will settle on one of the two platforms in the middle of the room, leaving itself open for attack. In order for Link to defeat Mothula, he can equip the Roc's Feather, so he can dodge its attacks and jump onto the two platforms. Once Mothula lands on the platforms, Link gains an advantage and attacks it by using the Sword.

Gohma is a boss that is encountered in the Dancing Dragon Dungeon. Gohma starts attacking Link by charging at him and trying to grab him with its claw. If Gohma grabs Link, it will smash him against the ground twice before letting go of Link, being one of the most powerful attacks so far. Once dealt with ten hits from the sword, Gohma's claw will be destroyed, letting Link be able to attack its eye. As Gohma moves around the room, it will briefly open its eye. Once Gohma has, Link can attack it with the dungeon item, the Slingshot.

Digdogger is a boss that is encountered in Unicorn's Cave. During the battle, Digdogger will jump around the room trying to land on top of Link. In order for Link to defeat Digdogger, he must equip the Magnetic Gloves to pull the spiked ball from atop the pillar in the top right corner of the room. Link must hit Digdogger with the spiked ball four times. Once dealt with four hits from the spiked ball, it will split into six smaller versions of itself. Link can defeat the smaller Digdoggers by either using the spiked ball to hit each of them or he could attack them with his Sword.

Manhandla is a boss that is encountered in Ancient Ruins. Manhandla's four flowers each have a wide mouth that will constantly be opening and closing throughout the battle, shooting fireballs at Link. To fight Manhandla, Link must use his Magical Boomerang and hit the flowers with it. Link can then hit the main body with his boomerang. After several strikes, the body will split apart to reveal a core. This core can now be hit with Link's Sword unmercifully.

Gleeok is a boss that is encountered in the Explorer's Crypt. At the beginning of the battle, Gleeok attacks Link by shooting fireballs out at him that do half a heart of damage to Link. In order for him to defeat Gleeok, he must sever both of Gleeok's heads. Link can do this by using the Sword to attack its heads, or he can throw Bombs at their head. After both heads are destroyed, Gleeok is reduced to a skeleton. For this phase, Link must use the Roc's Cape in order to be off the ground when Gleeok lands to avoid being paralyzed. Link can then move out of its way and attack Gleeok.

Medusa Head is the boss of the Sword & Shield Maze. If Link gets hit by one of its orbs, he becomes frozen in stone for a few seconds and vulnerable to Medusa Head's fireballs. When Medusa Head is in its sword state, it reappears at one of the top corners of the room to shoot lasers from both of its eyes while moving to the other side. In order for Link to defeat Medusa Head, he can briefly stun the boss by using the Hyper Slingshot equipped with Pegasus Seeds. After it is stunned, Link can attack it with his sword.

General Onox serves as the final boss of Oracle of Seasons. During the first phase of the battle, Onox carries a large ball and chain which deals damage if Onox successfully hits Link with it. To fight him, Link must hit him with Spin Attacks (regular sword slashes do not hurt him). After taking a few hits, he sends Din in front of him as a barrier. Attacking her with Link's sword causing Link damage, so he must get her out of the way with the Rod of Seasons. After a few more hits with the Spin Attack, Onox disappears. 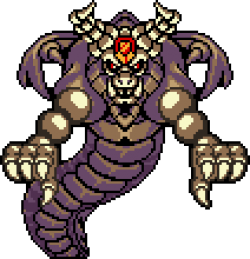 Unlike the previous phase, Onox transforms into his true form, the Dark Dragon. He has a variety of attacks; he spits blue fire at Link, he flies to one side of the room and slides his hand across the ground, harming Link on contact, and he tries and slam his hand down on top of Link. This is where Link's only chance of attack. He must jump onto Onox's hand, and once he raises it up again, hit the jewel on his head with constant sword slashes.

In the first part of the battle the witches are separate. All Link needs to do is stay on the bottom of the screen and hit the ice ball at the fire twin or the fire ball at the ice twin. It only takes three shots in all, and then they combine to form Twinrova.

After defeating Kotake and Koume, the witches will combine to form Twinrova. Take out the scent seeds with the Seed Shooter. If the fire location is currently shown, stay away from the lava when attacking her with the sword. After Link attacks her enough she will turn the two different colors. Use the Seed Shooter and shoot her with the scent seeds. After a while, she will say the she is going to sacrifice herself to bring back the king of evil, Ganon.

For the battle, Ganon will constantly be disappearing and reappearing. Sometimes he will appear and slash at Link with his trident. He also has several variations on an orb attack: sometimes he will shoot three larger orbs, one large orb, or many smaller orbs. To fight him, Link must charge up a spin attack when he isn't on the screen. When he appears, move next to him and hit him with the spin attack.