From Zelda Dungeon Wiki
Jump to navigation Jump to search
Want an adless experience? Log in or Create an account.
Medusa Head

Medusa Head, known as Medelock in the Oracle of Seasons manga, is the boss of the Sword & Shield Maze, the eighth dungeon in Oracle of Seasons, and can be found on the first basement floor.

Once Link enters the room, four spectral Medusa Heads reveal themselves and float to the middle of the room, merging to make Medusa Head. It proceeds to float around the room and occasionally breathes out three fireballs followed by two fireballs. Shortly after, Medusa Head can go into two different states, one that resembles a sword and a state resembling a shield.[1] In its shield state, Medusa Head teleports to the middle of the room and begins to shoot orbs from its mouth in a circular array of blue orbs across the room. If Link gets hit by one of its orbs, he becomes frozen in stone for a few seconds and vulnerable to Medusa Head's fireballs. When Medusa Head is in its sword state, it reappears at one of the top corners of the room to shoot lasers from both of its eyes while moving to the other side.

In order for Link to defeat Medusa Head, he can briefly stun the boss by using the Hyper Slingshot equipped with Pegasus Seeds. After it is stunned, Link can attack it with his sword. However, he does not need to stun Medusa Head to defeat it but can use the Roc's Cape to jump over the boss's attacks. Once Link defeats Medusa Head, he is rewarded with a Heart Container and the eighth and last Essence of Nature, the Changing Seasons.

If you're playing a Linked Game and have gotten the Mirror Shield, you can use it to bounce the blue orbs back at her, freezing her in place.

In the Oracle of Seasons manga, Medelock appears in Chapter 7: The Great Witch Maple. After Maple the Witch meets Link and Ricky in the Temple of Seasons, she tries to summon spirits to help her find the Rod of Seasons, but no spirits are summoned. After calling herself stupid, a mysterious voice asks Maple if she is the one searching for the Rod of Seasons. Thinking she successfully summoned a spirit, she happily replies that the spirit is right. The mysterious voice proceeds to ask if she is the chosen one. Maple excitedly answers she is and gloats that she will become a great witch, asking the spirit where the Rod of Seasons is. The spirit reveals that it cannot hand over the rod to her. However, it confuses Maple for the hero who beares the crest, Link, and tells her it has been waiting for her. 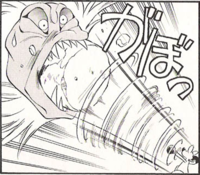 While Maple is questioning what it said, the spirit reveals itself as Medelock who has been sent by Lord Onox to kill Link and proceeds to chase Maple. Hearing Maple's call for help, Ricky and Link come to her aid. Ricky uses his Tornado Punch on Medelock to punish it for bullying a girl, nocking the minion back. Link announces that he is the one who beares the crest and that he is Link. Medelock tells them it will destroy them all. Like in Oracle of Seasons, Medelock begins to shoot lasers at the group in order to destroy them. By using the Pegasus Seeds, Link is able to avoid its lasers. Ricky distracts Medelock by punching a rock into its mouth, but shortly after, it crushes the boulder and rushes at Link. Using this distraction, he uses this opening to slice Medelock in half, defeating the monster. The Season Spirits reveal themselves to Link and thanks him for destroying Medelock.