From Zelda Dungeon Wiki
Jump to navigation Jump to search
Want an adless experience? Log in or Create an account.
Temple of Seasons 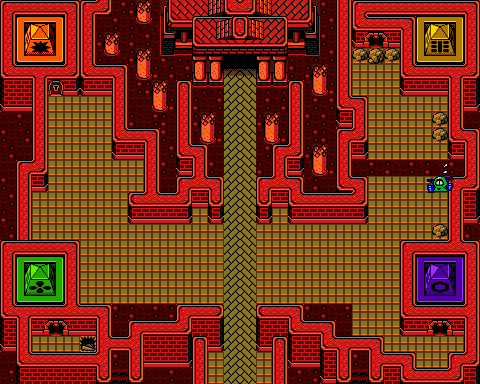 The Temple of Seasons is a location featured in Oracle of Seasons. Composed of four towers surrounding a central structure, the temple serves as the home of the four season spirits and resting place of the Rod of Seasons. It was originally located in the mountains of northwestern Holodrum. However, after Din's capture by Onox, the temple sinks underground leaving only a handful of ruins in its wake, causing the land of Holodrum to spiral into chaos as the seasons fall out of balance.

Early in his adventure, Link discovers that the temple has actually fallen into the underground world of Subrosia, allowing him access to the Rod of Seasons and the blessings of the four spirits to aid in rescuing Din. Link makes several return trips to the subterranean temple in order to gain new blessings throughout his journey, while its remains above ground are explored in search of the eighth and final dungeon, the Sword and Shield Maze.

Curiously, the temple remains in Subrosia even after Din has been rescued and the seasons return to normal, and neither she nor the season spirits make mention of what will happen to it or if it can ever be restored to the surface. As such, the fate of the temple after the events of the game remains unknown.