From Zelda Dungeon Wiki
Jump to navigation Jump to search
Want an adless experience? Log in or Create an account.
Link: The Faces of Evil 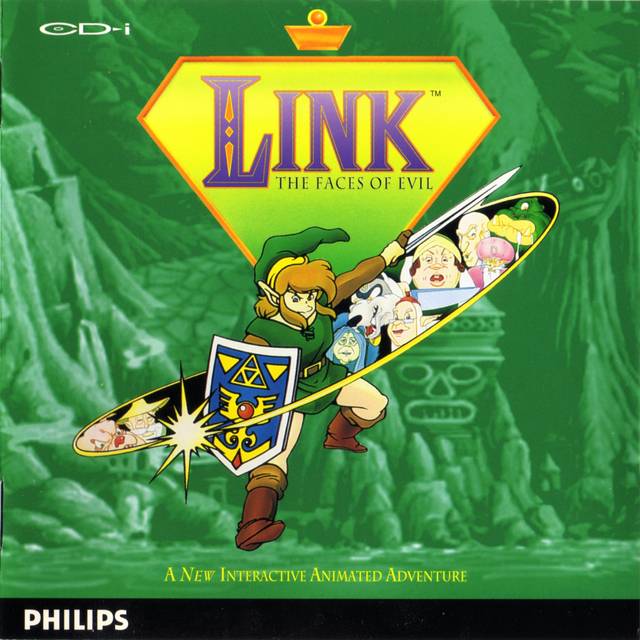 Link: The Faces of Evil is a game developed for the Philips CD-i.

Link: The Faces of Evil has the player maneuvering Link with the CD-i controller.

When Link begins, he has access to three areas, accessed on a world map, and two items: the sword and shield. Somewhat similar to the original The Legend of Zelda, Link is able to stab with his sword, and after receiving the magic sword from a fisherman, he is able to shoot "Power Blasts", the in-game equivalent to the Sword Beam, to attack enemies from afar. Link's shield can deflect enemy attacks while he's standing still and while crouching. Also, if he walks forward while crouching, Link does the "duck walk".

Link can obtain new items later on in his quest, including lamp oil, rope, and bombs. All of these can be purchased at the shop using "rubies". Link can get "rubies" by defeating the enemies who drop them, then stabbing at them with his sword. Curiously, this is also how he talks to the NPCs. Just like Link, the enemies in this game have their stamina measured in "Life Hearts". Link begins with only 3 Hearts, but he can increase his health in different ways. Whenever he is damaged by an enemy, he loses at least a half-heart of stamina. The first two times Link runs out of hearts, he has the option of continuing from a checkpoint near where he died. If, however, Link dies a third time, he is brought back to the map screen and has to start the level from the beginning.

One day in the now peaceful land of Hyrule, Link complains to the King of Hyrule, "Gee! It sure is boring around here." His problem is fixed when Princess Zelda is kidnapped by Ganon.

The creation of Link: The Faces of Evil and Zelda: The Wand of Gamelon have roots in a pair of failed CD add-ons for the SNES.

Wishing to compete with the Sega CD, Nintendo signed a deal with Sony in 1989 to create a similar CD based console known as the "Nintendo PlayStation", or the SNES CD which would be an add-on for the Super Nintendo Entertainment System. This would mean that games could be larger and have improved graphics. However, Nintendo broke the deal with Sony and instead signed a deal with Philips to make a similar console. This influenced Sony to use their add-on to make an entirely new console, known as the PlayStation.

After seeing how the poor results of the Sega Mega-CD, Nintendo stopped the whole add-on idea altogether. After breaking the contract with Philips, Nintendo agreed to give them the license to five Nintendo characters, including Link, Princess Zelda, and Ganon, for use on Philips' console, the CD-i. After getting contracts with several third-party studios, Philips decided to use the characters to create three games for the CD-i. Nintendo took no part in development of the games, except in giving advice on the look of the characters, which were based on the artwork from the original The Legend of Zelda and its sequel, Zelda II: The Adventure of Link, along with their instructional booklets. Philip wanted the developers to take advantage of all the features the CD-i had to offer, including FMV (Full Motion Video), high-resolution graphics, and CD-quality music. As the system wasn't designed as a gaming console first, there were some technical problems with the system and it's controller. These problems included laggy controls, and many troubles with the audio, graphics, saving memory, and the disk access. Despite all these problems, when the first two games were shown at the 1993 CES, the audience was amazed by the quality and fluidity of the animation.