The Legend of Zelda Warps 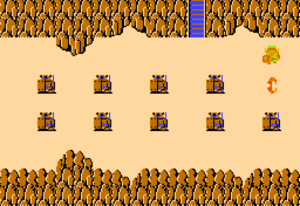 Location of the Power Bracelet

In The Legend of Zelda there are four sets of stairs across the overworld that will lead you to an underground room. This room will have three sets of stairs for you to choose from; each staircase takes you to a different location of the overworld. This guide will show you every location, along with which staircase leads to what and how to open the warps. For your convenience, we've color coded each staircase, so you know which staircase leads where; the staircases aren't actually labeled with colors in-game.

- The Power Bracelet is needed to have the strength to push the boulders that open the Warp Points, so you must obtain it in order to proceed.