~ Ocean Walk ~
In the large ocean area on the narrow path of sand southeast of Nabooru, the Boots will let you walk on the water. Walk to a certain spot at the dead-end to find a Point Bag. When you’re walking towards the Ocean Palace, keep trying to go up and you’ll find a hidden path that leads to a Heart Container. Enter the Ocean Palace. 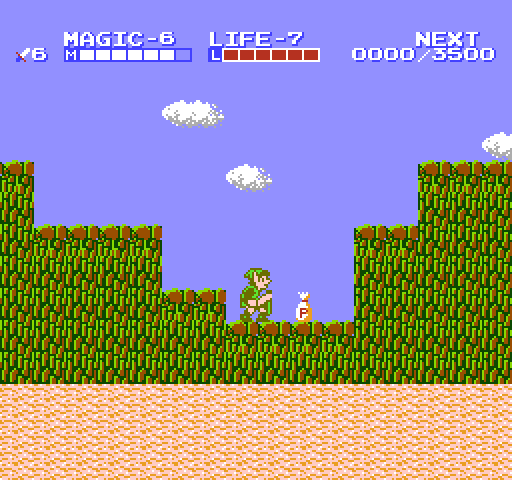 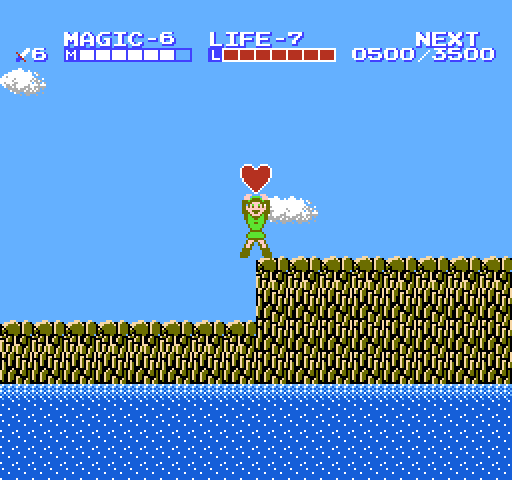 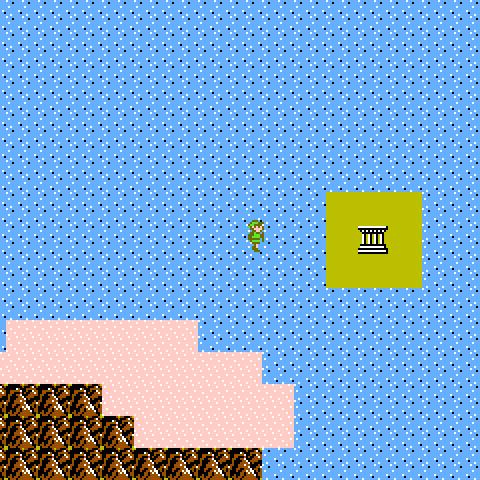 Climb the stairs while killing the Ropes. A statue on the wall will shoot beams at you as well. This next room has three Bubbles, and a Key. Use Fairy to fly up to the ledge and proceed to the next room. Immediately turn around and grab the Key after entering, then go back to that room. 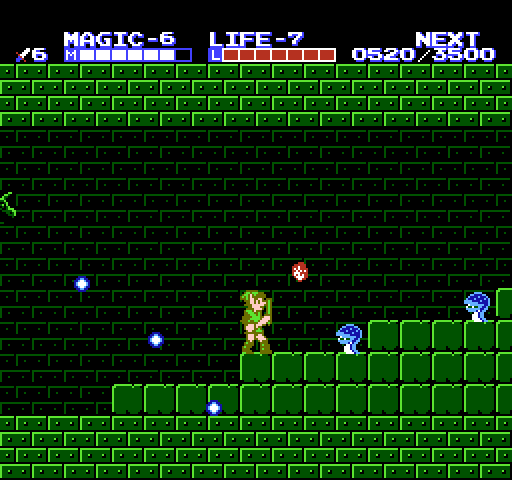 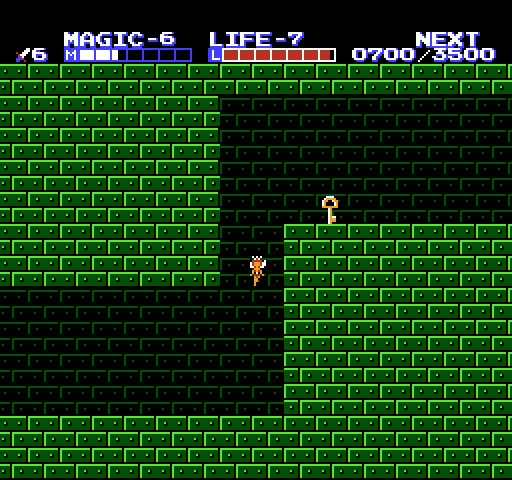 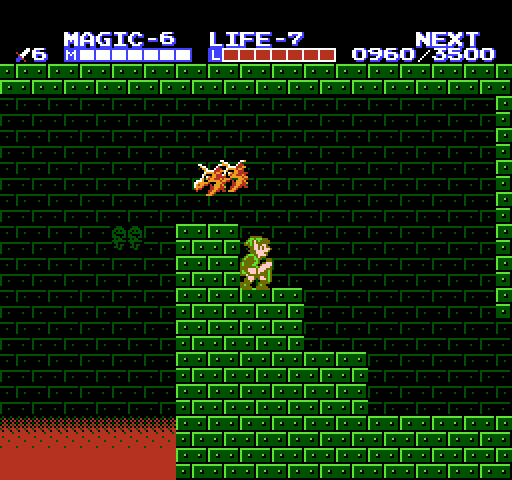 Try to grab the Point Bag on the disintegrating bridge. Dragon Heads will fly across, so be careful. You can either destroy the small block walls to battle the two Red Iron Knuckles, or use the walls to avoid them. Unlock the door and go down the elevator. You’ll be at the first fork in the hall of the palace.

Completely ignore the right passage unless you want experience points. Take the left one and you’ll encounter one of the most dangerous enemies yet, the Sorceror. Keep going and you’ll be in a room with falling blocks. Make the blocks build up, and climb them to reach the Key. 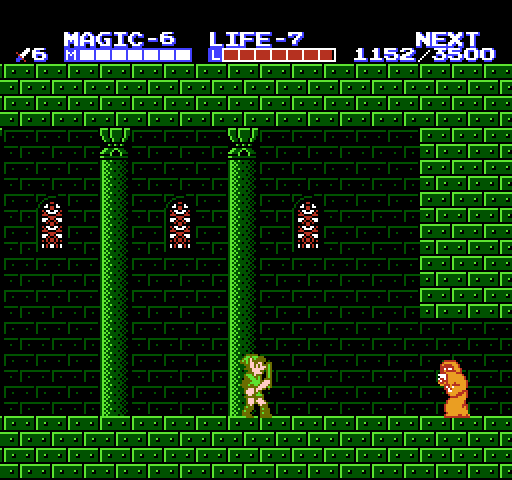 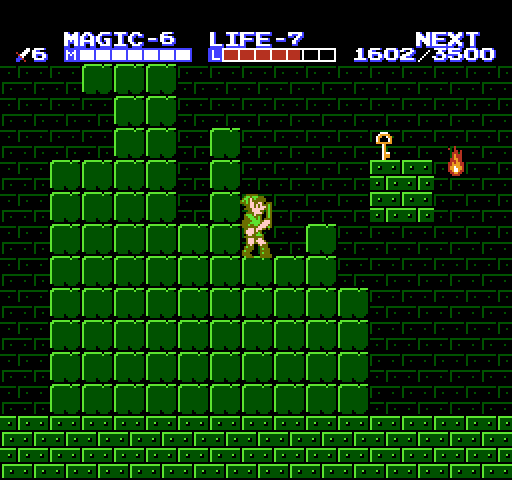 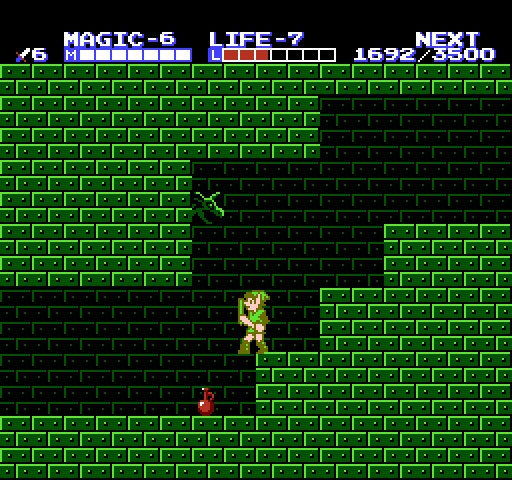 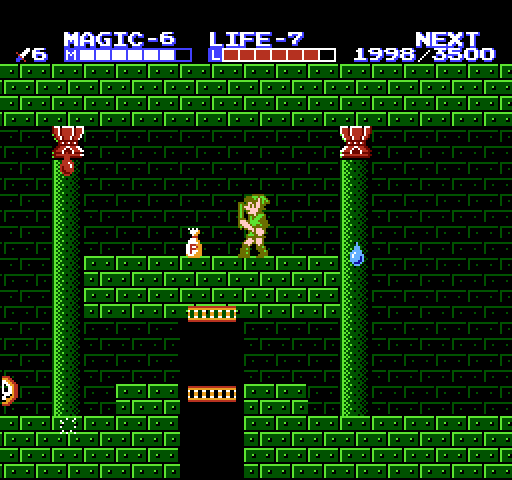 The right hallway has more enemies and a Red Potion at the end. If you don’t need any of these, go through the left one. By taking the left one you’ll come across an elevator. Use Jump to get the Point Bag above it. Once you grab it head down.

First take the left path. Kill the Mace Thrower and break through the blocks. Do three Upward Thrusts below the Point Bag to get it fast and safely. Go back to the elevator and take the path on the right this time. 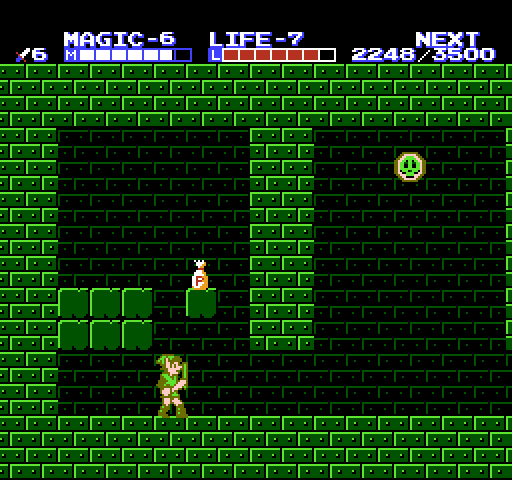 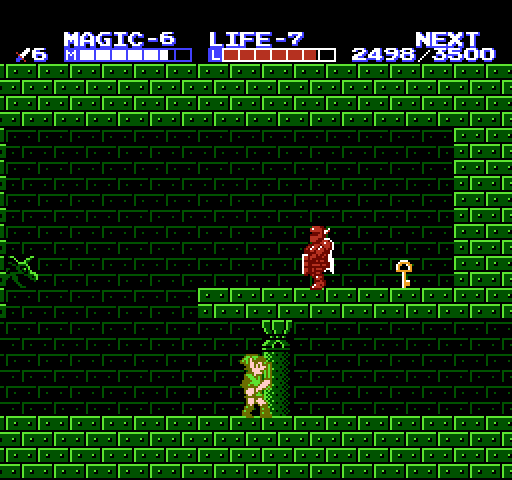 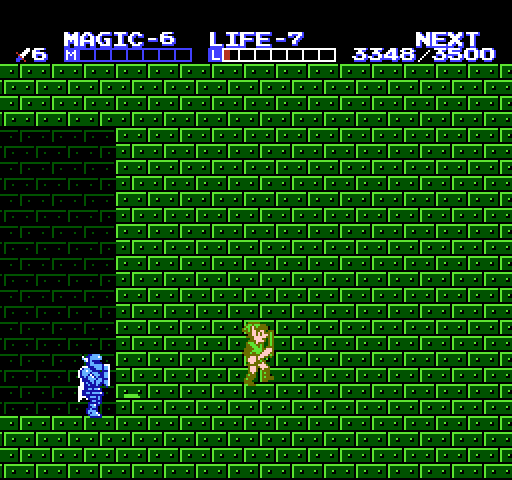 ~ Getting The Flute ~
Take the Key from the Red Iron Knuckle. You’ll go through a long hallway full of Bubbles and Sorcerors. Near the end there is a Blue Iron Knuckle at a dead-end……or is it? Jump through the false wall to keep on going.

After coming out of the false wall, go down the first elevator you see. Go through the locked door, then the hallway full of Wolf Heads and Sorcerors. In the next room, enable Jump and slash the statue to get a Red Potion. Dual with the Orange and the Blue Iron Knuckles and unlock the door to get the Flute! 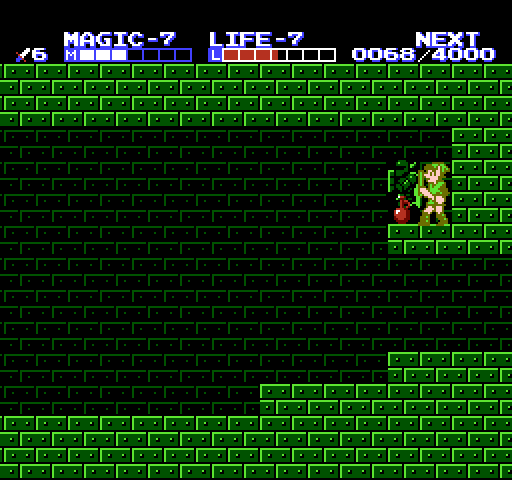 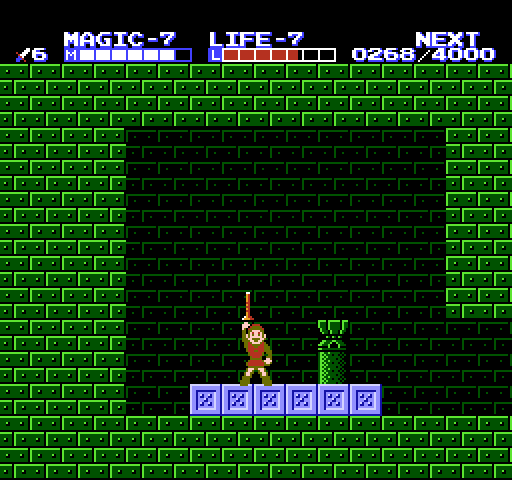 Backtrack all the way to the elevator and go up it. After you do, your goal is to head east and to go up the elevator. From that point go west until you reach a Key. The first hall is full of Sorcerors and Tinsuits, along with block ledges. 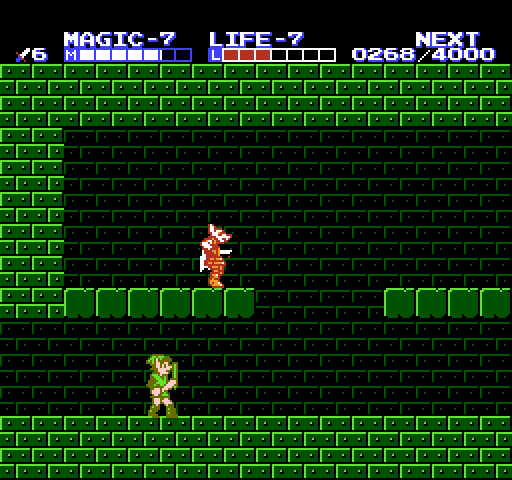 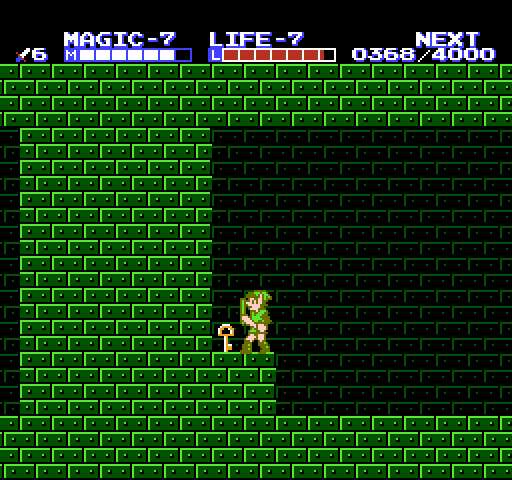 The room with the Key has three Blue Stalfos. When you have the Key, backtrack all the way through the false wall, and up the first elevator you come across to the west of it.

From the elevator, head west through the locked door. We’re going to collect a couple more things before we face the boss.

Stab the statue head on the wall to get a Red Potion. We’ll start off by going through the hall on the left. Destroy the two Bubbles and Red Iron Knuckle here. Snag the Point Bag and return to the elevator. 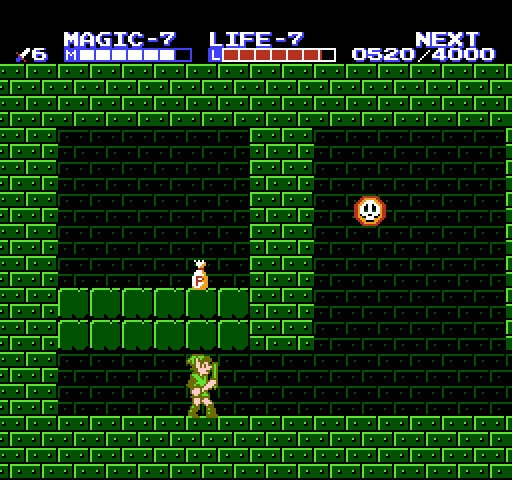 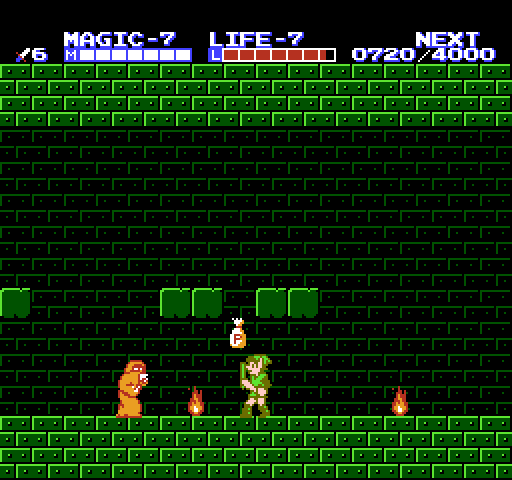 This time go down the elevator. Use Jump to get the Point Bag on the block ledges. Continue to the next room to get a Key at the end. This room has three Iron Knuckles; one of each color variation. Grab the Key and return to the elevator. 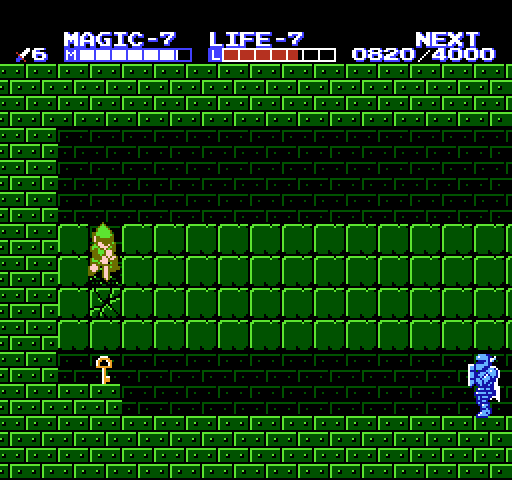 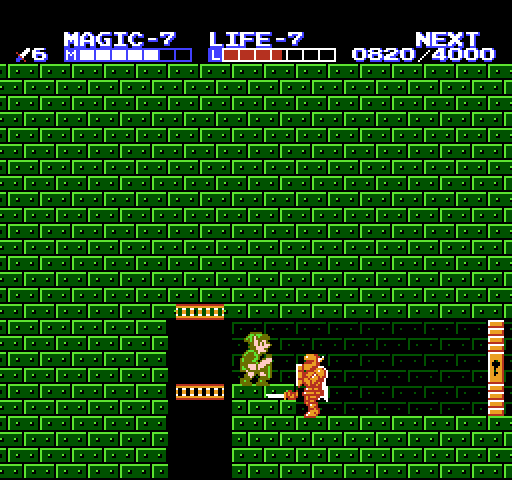 Go all the way up on the elevator. This last room has some stairs, and also one of each Iron Knuckle. You’ll first encounter an Orange one. Kill it in the narrow hall (narrow makes it hard to do jump thrusts) and go through the locked door.

Destroy the blue and red ones can climb the stairs. Make sure your magic is full, you’ll need every little bit you can possess if you want to beat this boss.

~ Gooma ~
Unlike our last battle with Carock, this battle is by far the hardest. Gooma moves slowly and has a mace that does not like to play nice. The mace hurts a lot, even with Shield. Use Shield only, and save the rest of your magic to use Life when needed.

You have to hit his body. It is recommended that you enable Jump for this fight. Walk up to him and slash him directly, then quickly jump away from his mace, it hurts a lot. Take your time doing this until you have defeated Gooma. 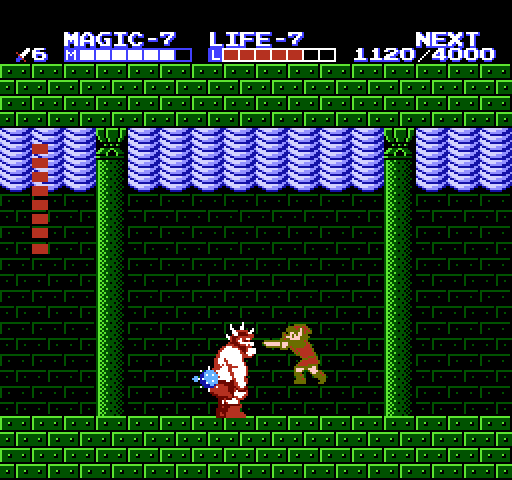 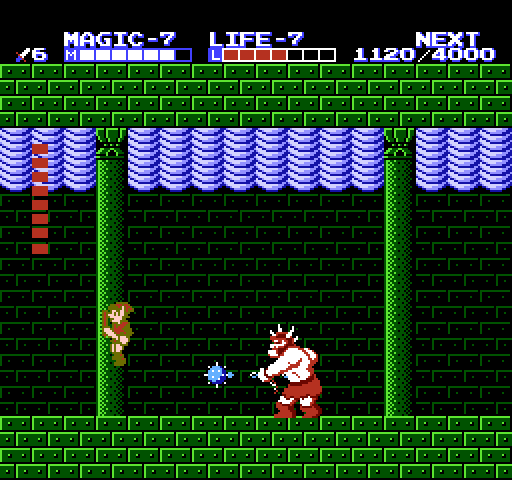 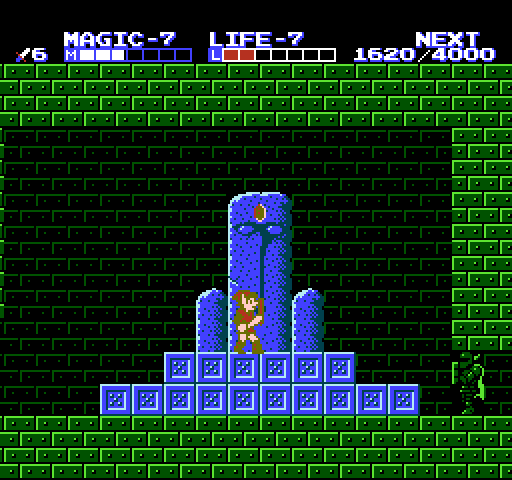 Walk into the last room and place the Fifth Crystal in the statue. Whew, only one left to go, but it is by no means easy. Dangerous Hyrule is full of traps and hostile enemies, but lots of treasures and secrets, too. Keep it up, you’re almost there!