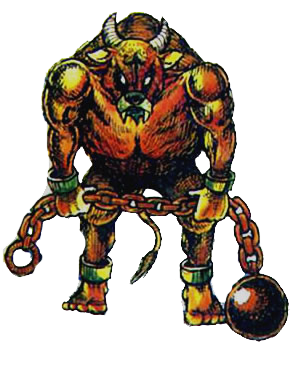 Gooma is the fifth Boss in The Adventure of Link. It is found at the end of the very long Palace on the Sea. It only appears in the North American version of the game; in all other versions of The Adventure of Link, this boss fight is a re-match against Jermafenser, the boss of the Midoro Palace.

Gooma's primary attack is to use a large spiked ball, which it throws at Link. This attack causes some major damage, so Link should avoid it if he wishes to survive the fight. The best strategy to use while fighting this boss is to have the Jump Spell equipped, and optionally the Shield Spell if Link has low health. If Link approaches Gooma, it instantly tries to hit Link with the spiked ball. Thus, Link should lure Gooma into attacking, jump over the spiked ball, and then once Link lands, hit Gooma with the Sword. Gooma takes a few hits to defeat, so patience is key for this fight. Keep repeating the process and soon enough Gooma will be defeated.

Once Gooma has been defeated, Link is rewarded with 500 Experience Points, and Link is given the key that opens the next room. Here, Link can place the fifth Crystal into its place.

This boss did not appear in the Japanese version of the game, instead there was a second appearance of Jermafenser in its place.