Link (The Legend of Zelda)

This article is about the Link who debuted in The Legend of Zelda, the first game of the Zelda series. For other versions of the character, see Link. 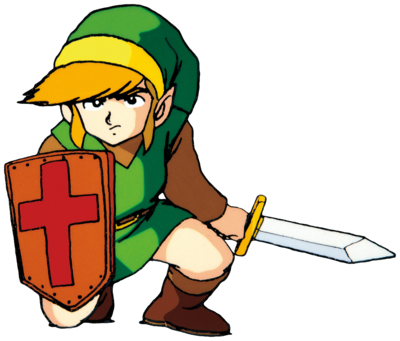 Art from The Legend of Zelda

"A long, long time ago the World was in an age of Chaos. In the midst of this chaos, in a little kingdom in the land of Hyrule, a legend was being handed down from generation to generation, the legend of the "Triforce"; golden triangles possessing mystical powers."

— The Legend of Zelda Instruction Manual

Link first encountered Ganon's minions attacking an old woman. After he successfully forced them to leave her be, she thanked him and gave her name as Impa, trusted nursemaid of the ruling Princess Zelda.

She went on to explain to him what has happened to Zelda's kingdom within Hyrule - the evil Ganon had raised an army to attack the kingdom and stolen the Triforce of Power, one of Hyrule's most powerful treasures. With this, he had subjugated the land and captured Zelda. However, before her capture, the princess had done two things. First, split the Triforce of Wisdom, the Royal Family's other great treasure, into eight fragments and had them hidden in deep labyrinths. And, second, sent Impa to find someone with the courage to defeat Ganon.

Accepting Impa's challenge, Link took up the sword offered by an Old Man who warned him of the dangers of going alone, and set off to recover the Triforce fragments and use them to defeat Ganon.

From this starting point, he travelled across the kingdom, searching far and wide. He encountered few other humans on his quest, and those he did encounter were reclusive, living in caves or holes in the ground - sometimes even sealed against entry! These included merchants selling supplies such as a Blue Ring which protected from damage; more old men with better swords; and old women who refused to even talk to him without a letter of introduction, let alone sell their potions.

After finding the eight monster-filled labyrinths with the Triforce fragments, and reuniting the Triforce of Wisdom - collecting other useful items such as a bow on the way - he gained access to Ganon's lair, hidden inside Spectacle Rock on Death Mountain.

Freed, Zelda thanked him, and titled him the "Hero of Hyrule" for his valour.

The Legend of Zelda Gallery

"Hyrule was on the road to ruin. The power that the vile heart of Ganon had left behind was causing chaos and disorder in Hyrule. What's more, even after the fall of Ganon some of his underlings remained, waiting for Ganon's return. The key to Ganon's return was the blood of Link - the valiant lad that overthrew the King of Evil. Ganon would be revived by sacrificing Link and sprinkling his blood on the ashes of Ganon."

— The Adventure of Link Instruction Manual

Link remained in Lesser Hyrule after saving Princess Zelda, attempting to help in its restoration after Ganon's invasion, even as monsters hunted him down in their efforts to revive Ganon with his blood.

As his sixteenth birthday approached, a strange mark - three triangles joined into one, which also appeared on the crest of the kingdom - suddenly appeared on the back of his left hand. Consulting Impa, the old nursemaid was astounded by it, and almost fainted with shock.

Once she recovered, she took Link to the North Castle, and the "door that does not open" there. Using secrets held only by her family, she opened it to reveal another Princess Zelda, lying seemingly asleep on an altar.

Impa went on to explain that this was not the Zelda he knew, but her ancestor, Princess Zelda I. This ancient Zelda had been cast into an eternal stasis after her jealous brother, who had not been allowed to inherit the full Triforce, and a magician ally of his, demanded she tell them where the third part had been hidden. When she had refused, the magician had cast a spell of eternal sleep on her, and died in the process. The now-repentant brother had sealed her in the room until the day came when she might be revived.

Impa then gave Link a package with six crystals and a scroll. The scroll, which could only be read by those bearing the Triforce mark on their hand, explained further; there were not just two pieces of the Triforce, but three - the third being the Triforce of Courage. When a King of Hyrule who had wielded the whole Triforce died, he passed on only the Triforce of Power and Triforce of Wisdom to his son, owing to his evil thoughts; while casting a spell that would cause the crest to appear on the hand of "a young man with that character who has been brought up correctly, has gained many kinds of experiences and reached a certain age".

The Triforce of Courage was sealed in the Great Palace of the Valley of Death. The Binding Force sealing it could only be removed by placing the six crystals in the six palaces linked to the force. Once in the Great Palace, there would be one final guardian to defeat, and then the full Triforce would be reunited under Link's control.

Impa bade him to collect the Triforce of Courage and use the Triforce's power to awaken the comatose Zelda I. Looking at the sleeping woman, Link agreed and set off with Magical Sword & Magical Shield in hand; aware that not merely the ancient King's challenge, but the threat of Ganon's army seeking to revive their master awaited him.

Travelling beyond Lesser Hyrule into what had once been the greater Kingdom of Hyrule, Link visited each of the palaces in turn, defeating their guardians and placing the crystals in their respective spots. With the binding force dispelled, he travelled to the Great Palace, where an elderly figure summons an enemy based on Link's Shadow as his final test. With this done, the sage awards link the Triforce of Courage.

Taking the three pieces of the Triforce to the North Palace, Link wishes for Zelda I to awaken. Conscious for the first time in many, many years; she sits up and thanks Link. Calling him a "real hero", she seemingly embraces him as a curtain falls.

The Adventure of Link Gallery