From Zelda Dungeon Wiki
Jump to navigation Jump to search
Want an adless experience? Log in or Create an account.
Old Woman 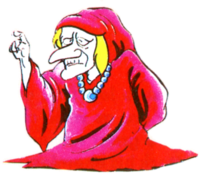 The Old Woman is a character in The Legend of Zelda.

The Old Woman is the owner of the Potion Shops that are found across Hyrule. However, in order for the Old Woman to open up shop, Link must first find the Old Man in a cave in northeastern Hyrule, where he gives Link the Letter and tells him to take it to the Old Woman.[1] After Link takes this Letter to the Old Woman, she starts selling the Life Potion and the 2nd Potion.

The Old Woman can also be found in different locations across Hyrule other than the Potion Shop. In one location, she asks Link to pay her, and in exchange, she gives him a hint.[2] This system has two useful hints; the first involves the Old Woman telling Link the secret on how to get to the fifth dungeon, The Lizard. She tells him to travel up, up, up the mountain.[3] This is a reference to how Link must travel north from the Lost Hills to reach the dungeon.

In Oracle of Ages, an Old Hag will appear in South Lynna during a Linked Game after completing the Skull Dungeon. She plays a role in the Clock Shop Secret quest, where Link is able to acquire the Noble Sword or the Master Sword, using a Linked Game Secret.