The Legend of Zelda Walkthrough – Level 6: The Dragon

If you are at the starting point of Overworld, there is a quick path to reach the dungeon, saving you some time. Just walk right two screens and use the Power Bracelet to push the block on the left. Instead, step into the middle staircase. From here just head down a screen, left a screen, and up a screen to reach the dungeon. 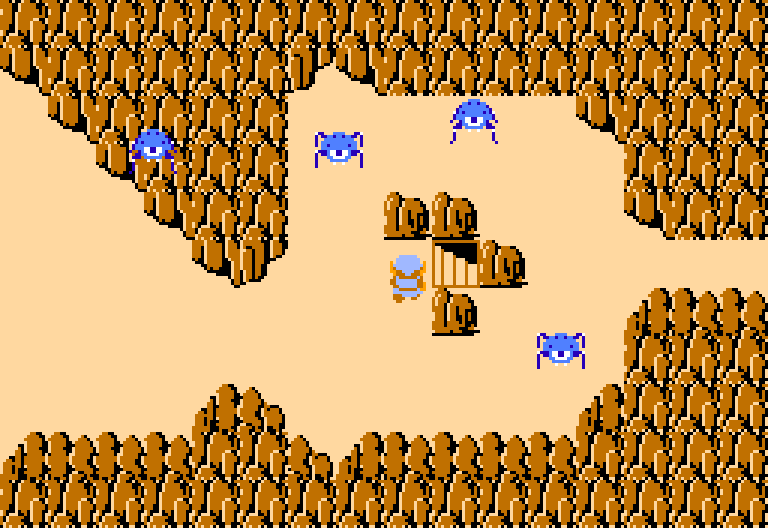 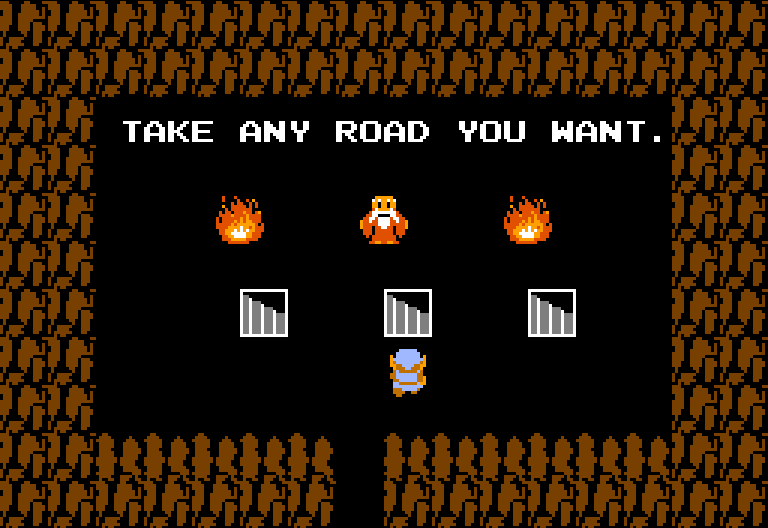 If at any point you get stuck, there is a potion shop nearby. Just head down a screen and right a screen. Place a bomb right between the two staircases and it reveal a hidden potion shop. 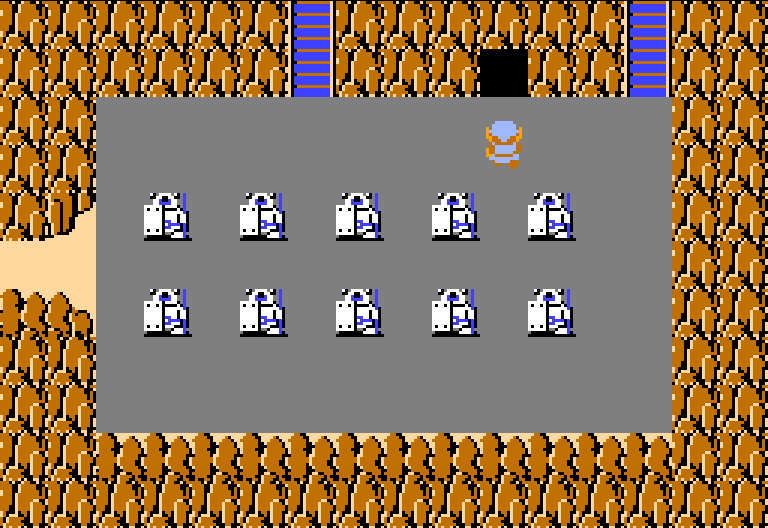 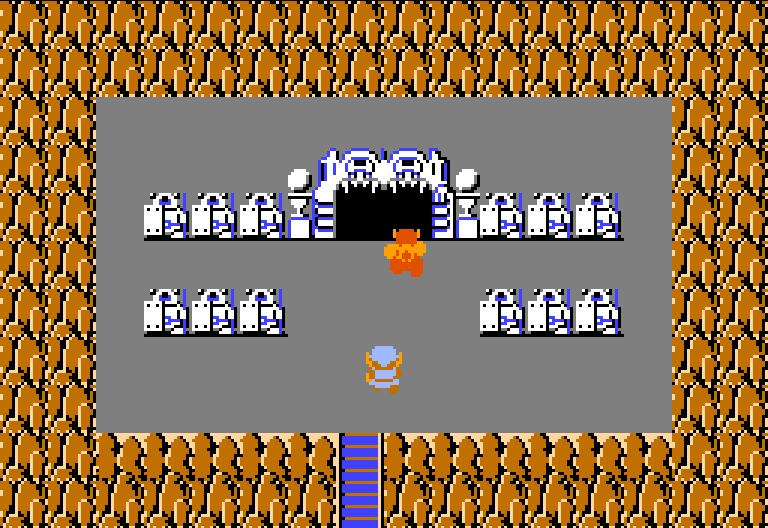 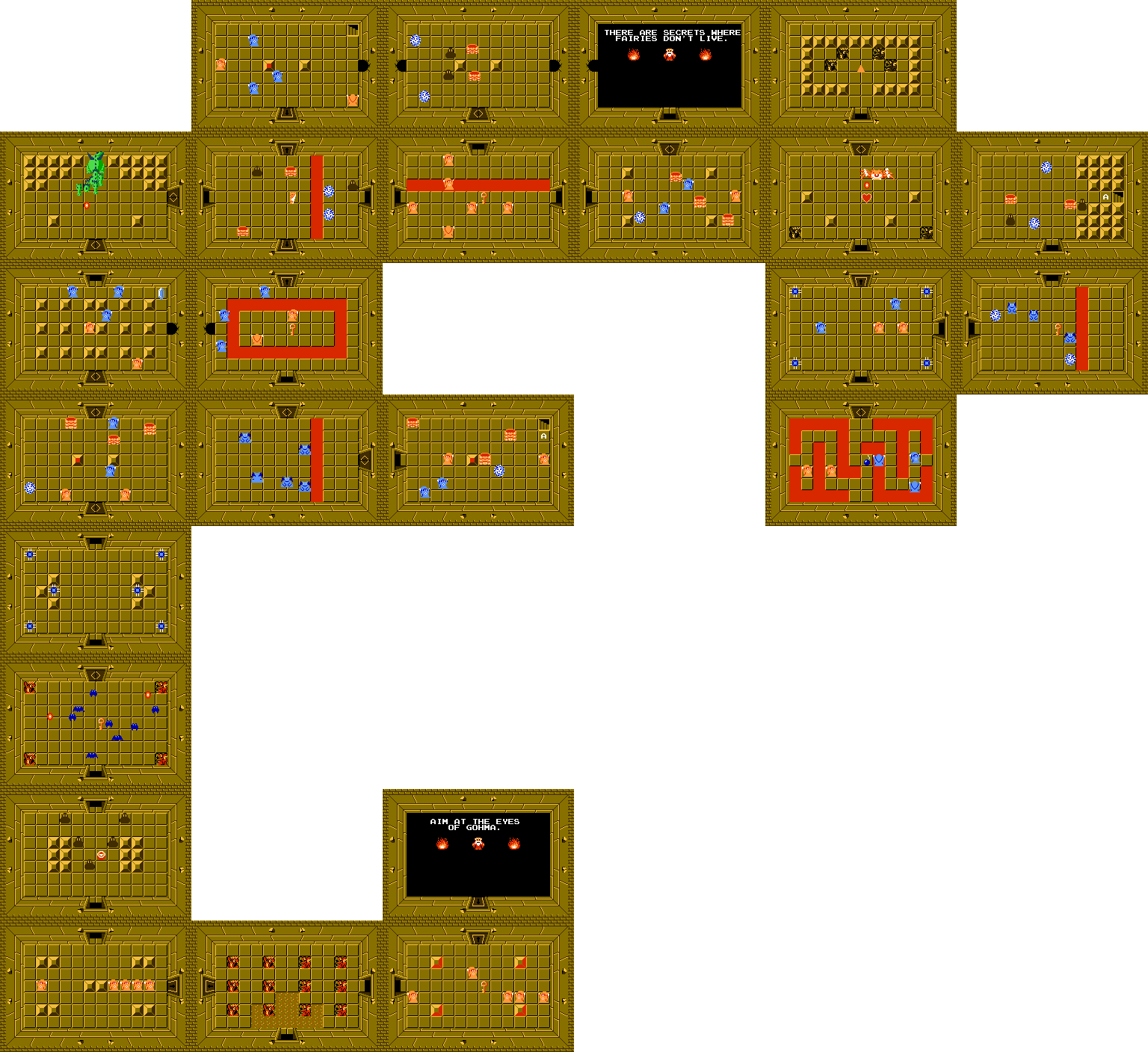 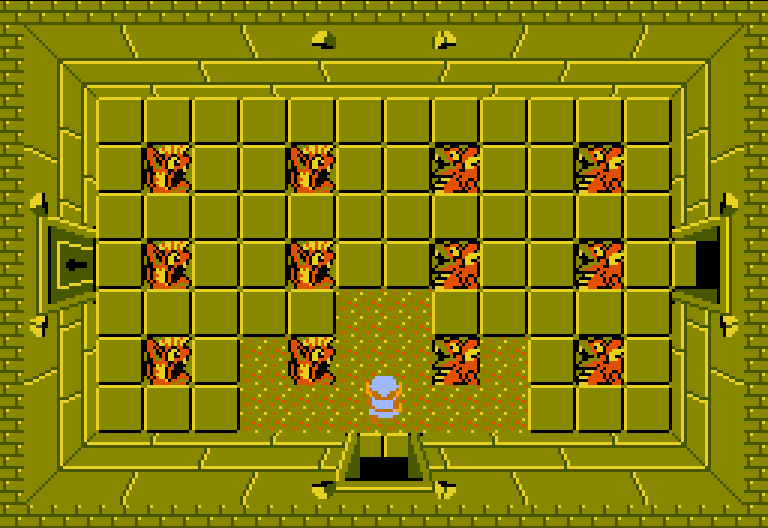 Go through the door to the right. 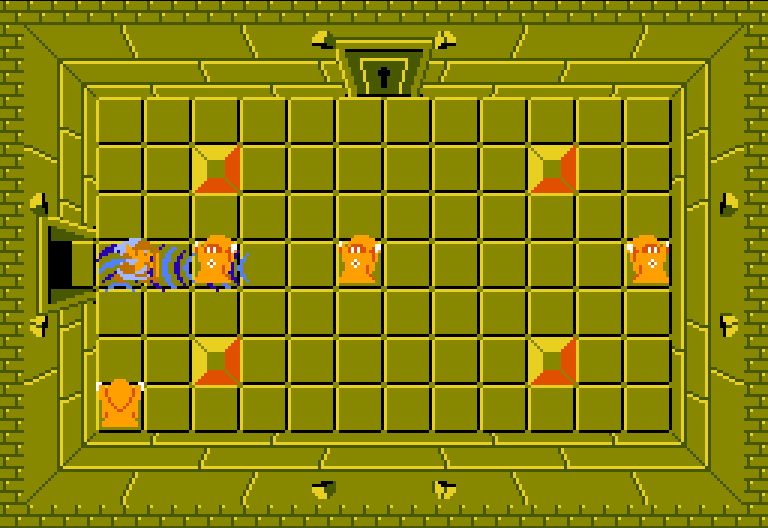 Here you will encounter a new enemy in the form of an Orange Wizzrobe. These are some of the more difficult enemies in the game and are found all throughout the dungeon. They will shoot beams at you that can only be blocked if you have the Magical Shield. They will teleport around the room and are only vulnerable when they fully appear. Defeat them with sword strikes and grab the key that is left behind. You can use the key here to open the locked door, but it just leads to an Old Man location and he tells you to AIM AT THE EYES OF GOHMA.

Walk back left a screen and go through the locked door on the left. Note, if you used the key at the previous locked door and you don’t have any more keys, you are stuck at this point. You will have to leave the dungeon and find a shop that sells a key. 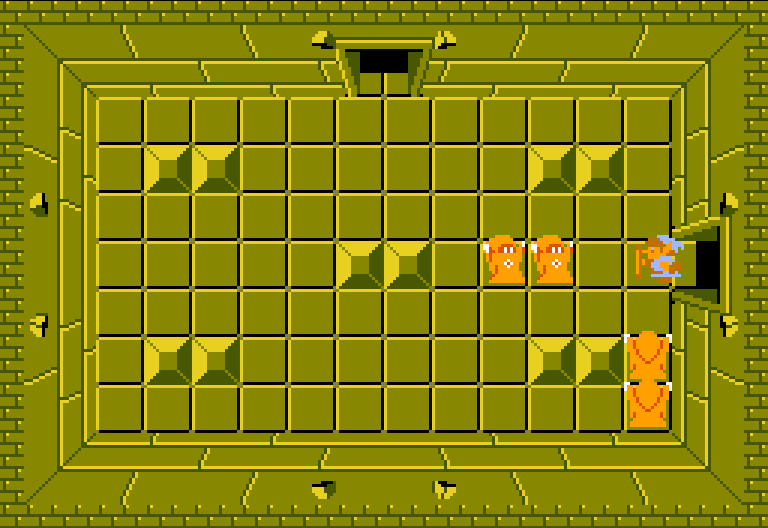 Four more Wizzrobes can be found here, and oddly enough this room has a trick where if a certain Wizzrobe is defeated, all four of them will be defeated. It’s completely random which Wizzrobe this is, but nevertheless, continue onward heading up a screen. 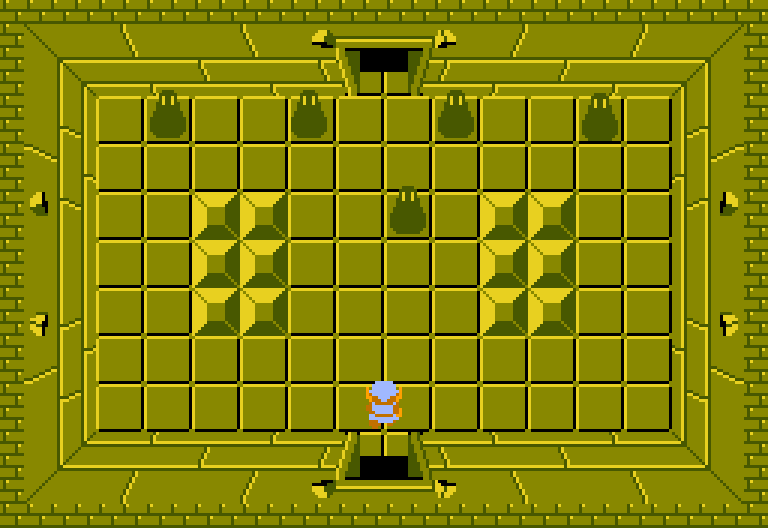 Defeat the five Zols in this room and grab the Compass. Walk up a screen. 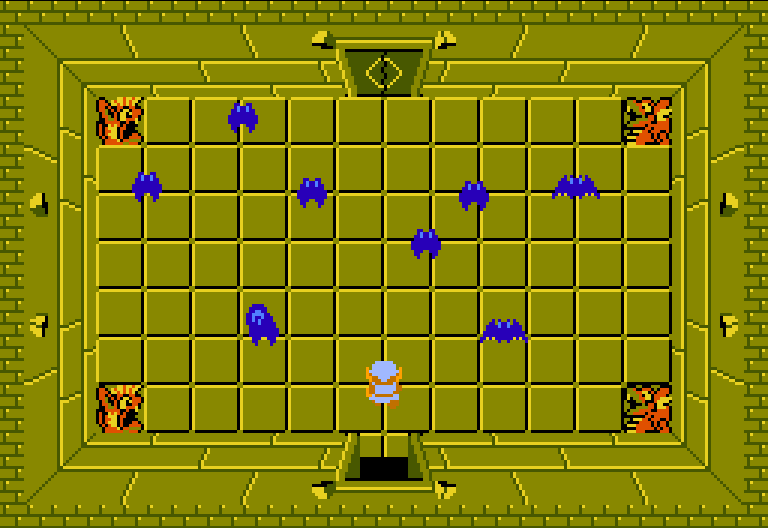 You can hide yourself in the doorway, which will avoid most of the fireball attacks from the stone statues. I suggest using the boomerang to defeat the Keese. When all have been defeated, continue heading up a screen. 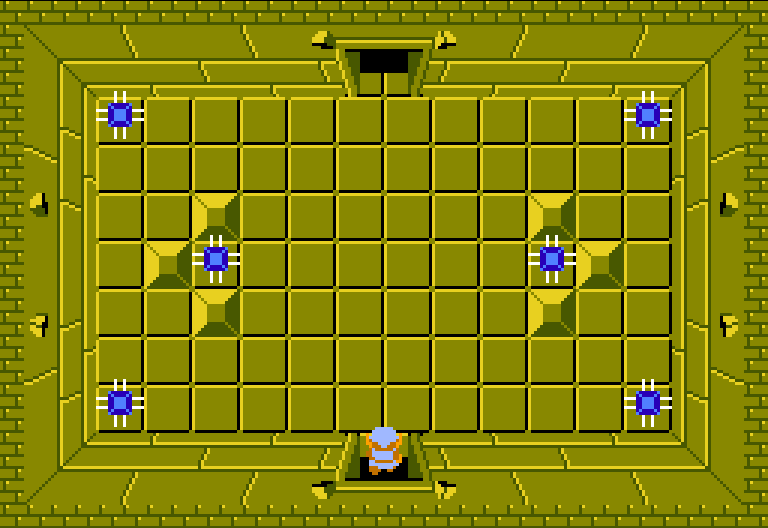 Just run straight ahead, avoiding the blade traps and walking up a screen. 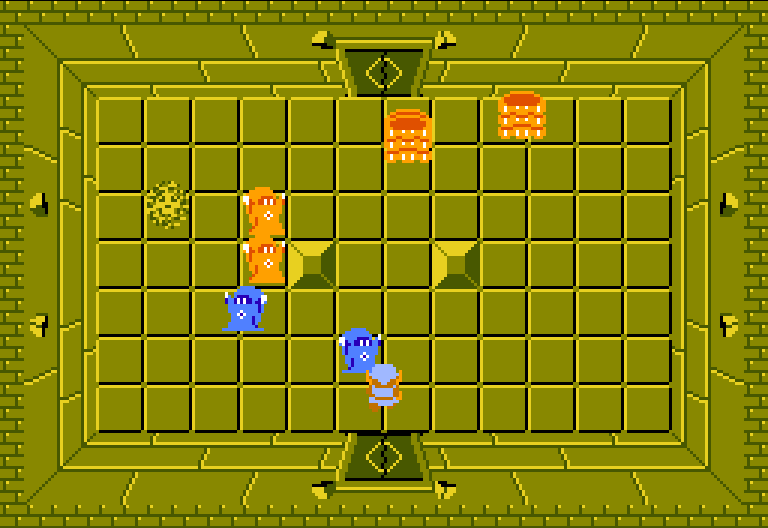 This is perhaps the most difficult room the game thus far, especially if you are not fully upgraded with the Magical Sword. You will encounter multiple Blue Wizzrobes here, who unlike their orange counterparts will move around the room, in addition to occasionally teleporting. That compounded with the Bubble that will restrict your sword attacks, the Like-Likes that will steal your shield, as well as the Orange Wizzrobes make it a really tough room. You have to defeat everything to progress. Use a potion if need be, but then progress up through the next room. 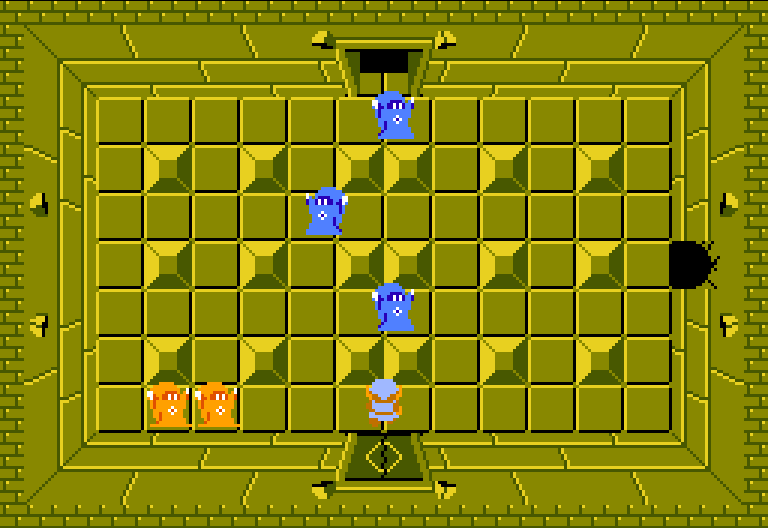 If you defeat all the enemies, you’ll get a Blue Rupee as a reward, but it might be best to just avoid them all. You can blast open a wall on the right side which leads through a shortcut in the dungeon, however that would have you skipping the optional dungeon item. Continue to head up a screen. 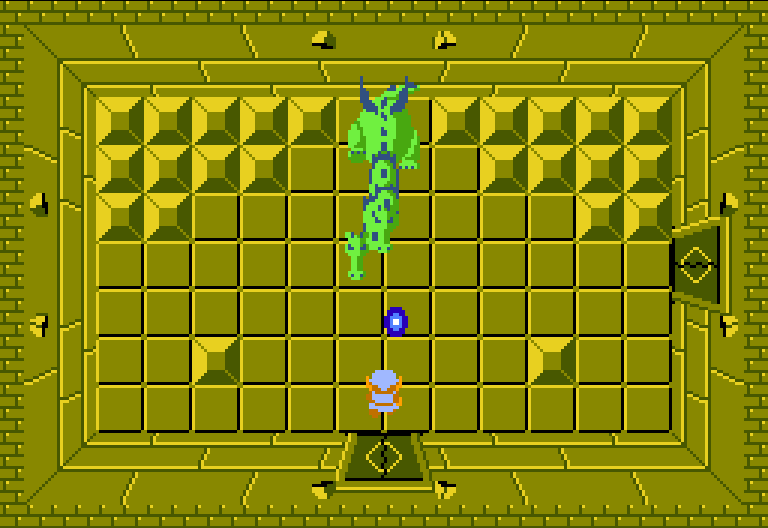 Here you will take on Gleeok again, but this time he has three heads instead of two. If you have the upgraded sword, he’s actually much easier and shouldn’t give you too much trouble, even with the additional head. Defeat the boss and head right a screen. 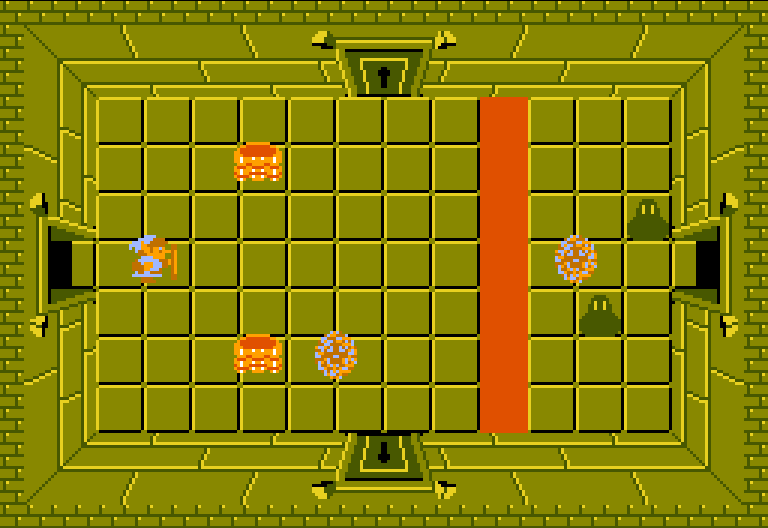 Defeat the Zols and Like-Likes and then grab the Map that is left behind. Use a key and head up through the locked door. 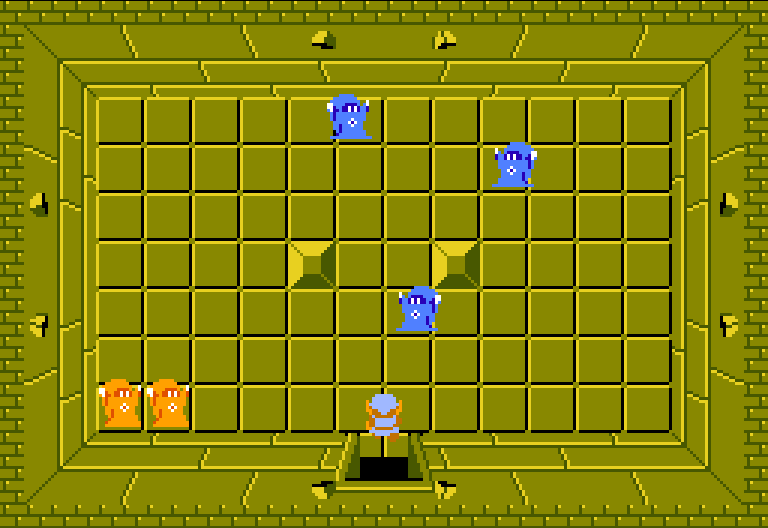 Defeat the five Wizzrobes in this room and then push the block on the left to reveal a hidden staircase. 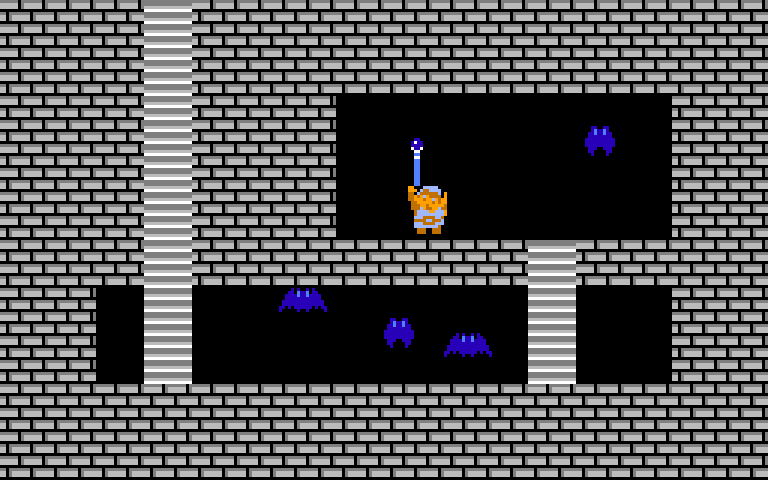 Defeat the enemies and grab the dungeon item, the Magical Wand. This item will shoot out a team attack, much like the Wizzrobes beam. It’s a better alternative than the Arrow, as it does not use Rupees. Exit the room and if you have an extra key on hand, just walk down two screens. If not, walk down a screen and then right a screen. 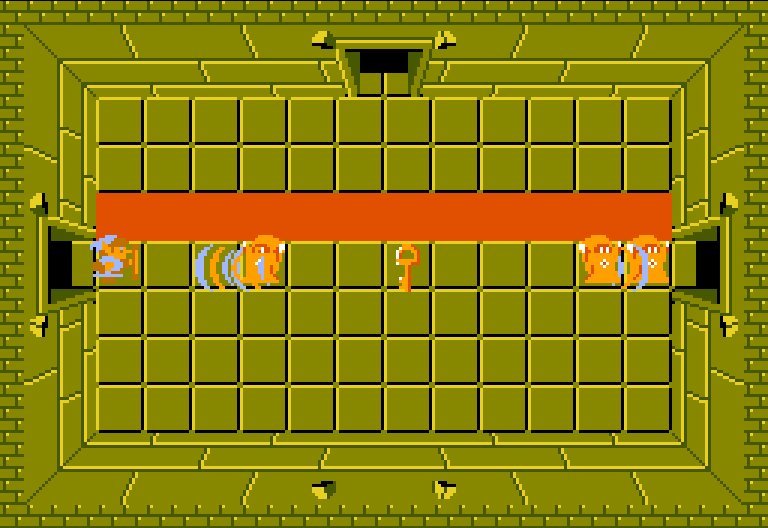 Run over and grab the key in the middle of the room and then head back left a screen. Use the key on the locked door below. 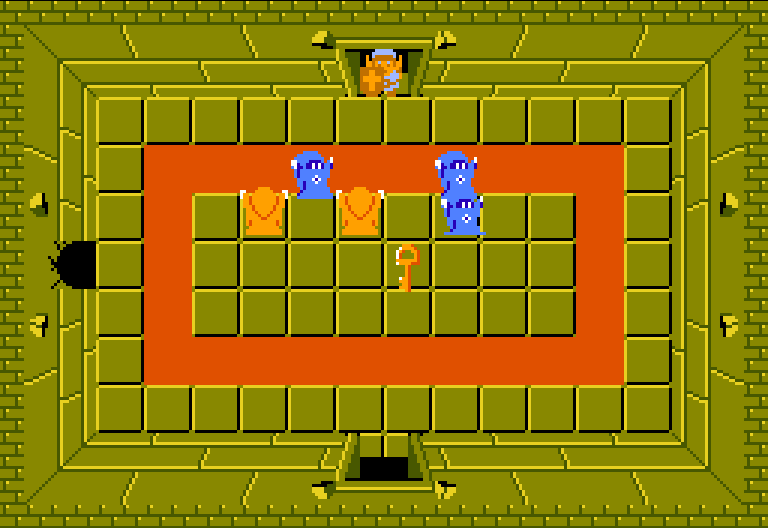 Grab the Key that is in the center of the room and then head down through the door. 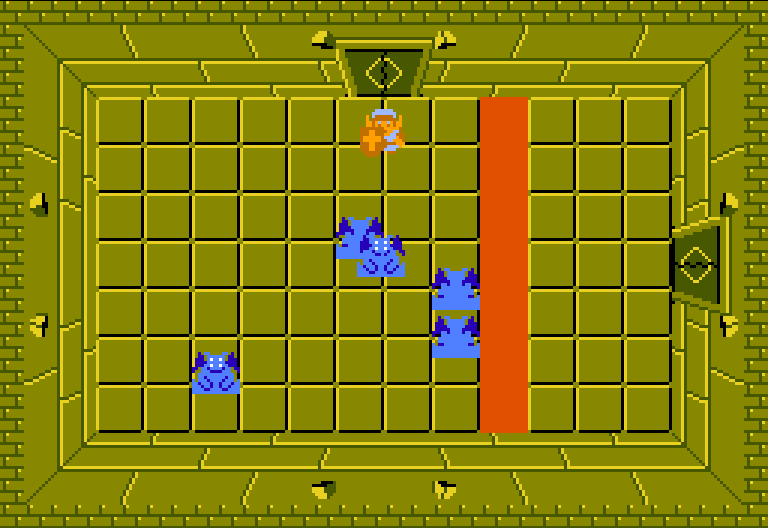 If you have the Magical Sword, this room becomes considerably easier. One slash with the sword will cause the Vires to be defeated, as they will no longer split into enemy Keese. Defeat all the enemies and head through the door on the right. 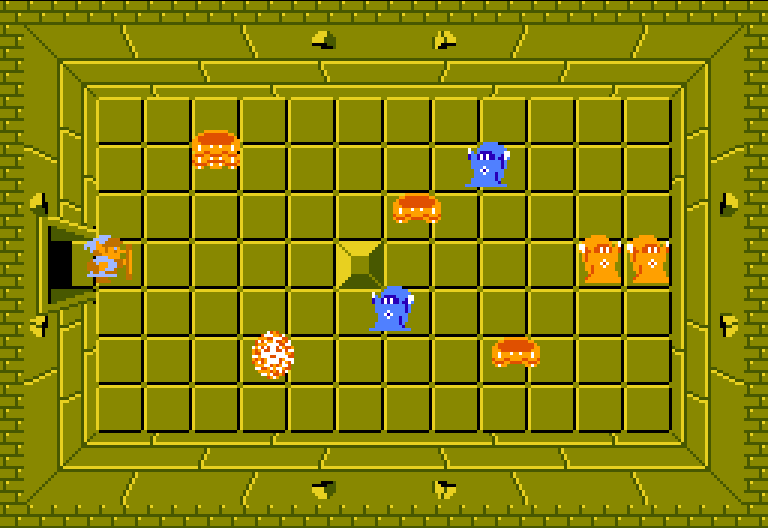 Another tough room and you’ll have to defeat all the Like-Likes and Wizzrobes. Once you’ve done so, push the block on the left and head down the staircase. 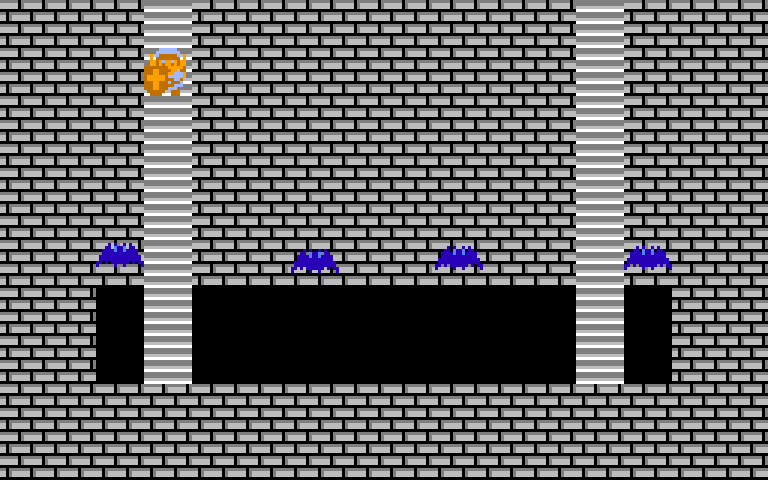 Make your way through the underground passage. 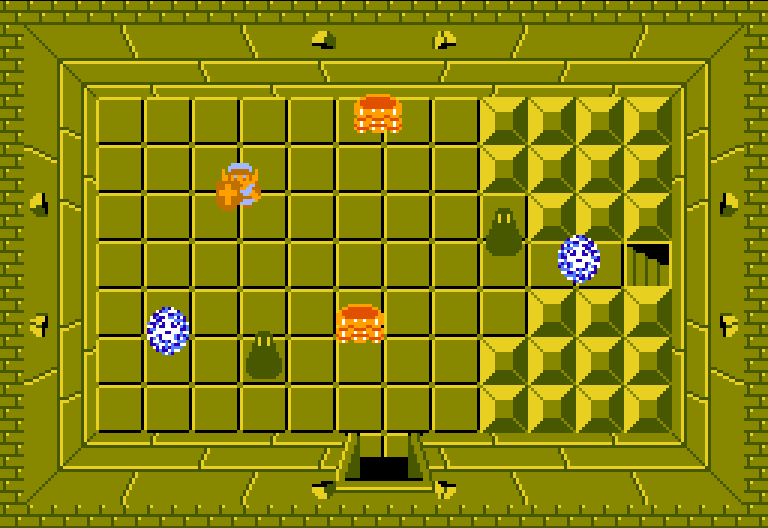 You can just avoid these enemies and head down a screen. 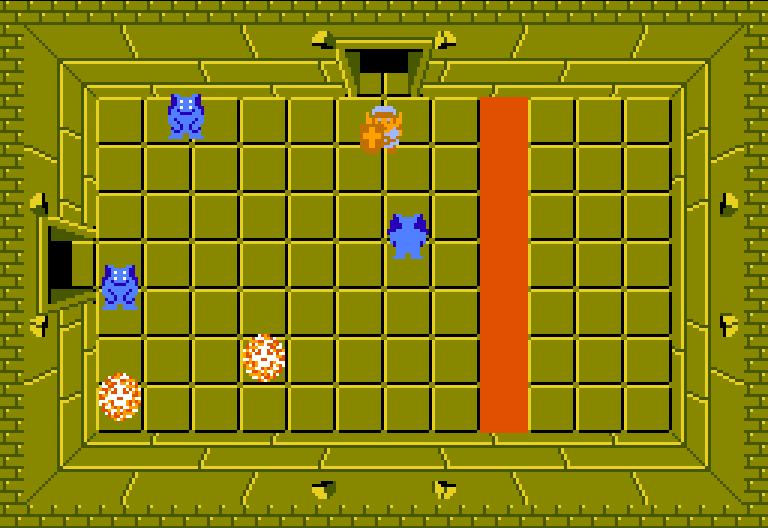 Defeat the Vires while trying to avoid the Bubbles. Grab the Key and head left a screen. 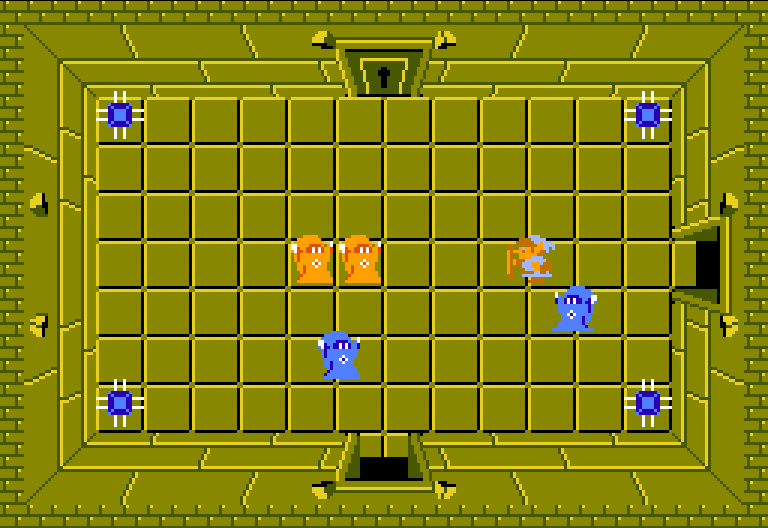 Avoid the Blade Traps and quickly run passed the Wizzrobes. Use the key and head up through the locked door. 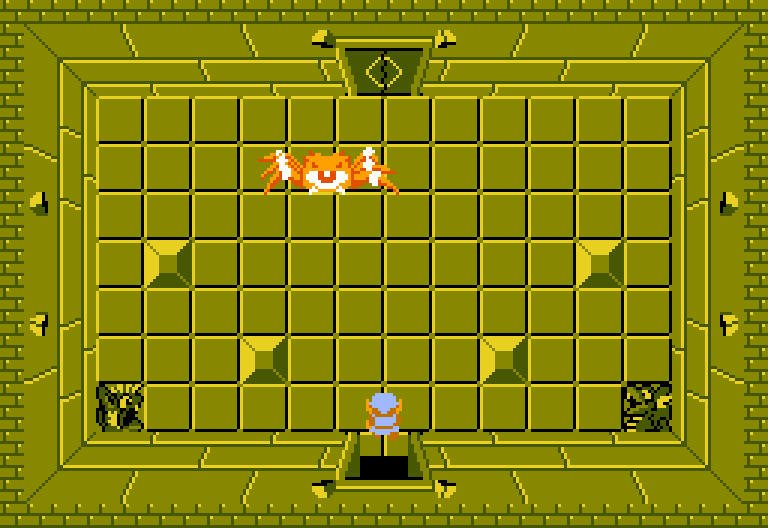 Gohma is one of the easiest bosses in the game as it takes just one hit to defeat. As the Old Man advised earlier in the dungeon, you need to aim at the eyes of Gohma. You will need to shoot Gohma with an Arrow. Just avoid the fireballs that are shot at you and wait for Gohma to open its eye. Shoot an arrow at its eye when its open to defeat the boss.

After defeating Gohma, grab the Heart Container that is left behind to increase your overall life meter. 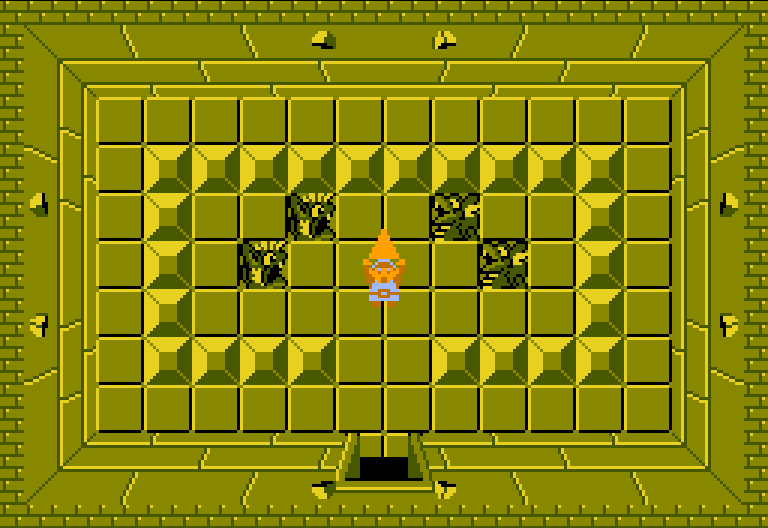 Walk to the center of the room and grab the sixth shard of the Triforce of Wisdom.