As in many previous Legend of Zelda games, The Wind Waker has a few Bottles that can be found across the Great Sea. Below is a listing of all four bottles' locations as well as how to obtain them. Listed further down as well are the variety of contents that can be placed into bottles, ranging from Potions to Forest Fireflies. 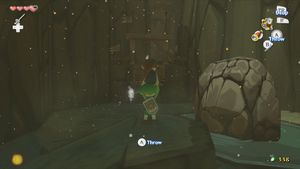 Link in preparation to throw Medli

After Link reaches Dragon Roost Island (F2) for the first time, head into the main living area as the storyline intends. Speak with the Rito inside and they will tell Link to meet a girl named Medli. Speak to her in the first upper room, and she will ask Link for help. Head back down the ramp and enter outside into a large circular area that is covered in dust particles. Continue to the left and down into the pit to find Medli once again. Speak with her, and she will ask Link to help her get onto the ledge on the far side of the area. Link can then pick her up and walk onto a higher rock nearby. When the wind faces the far side, Link can throw her with A and she will land there. Medli will talk to Link once more, and will give him the first Bottle in the process. This is the only bottle that must be obtained in the game. 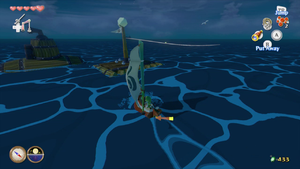 Link preparing to enter the Submarine

To obtain second Bottle, begin by heading over to Bomb Island (F5). Link will need to find Old Man Ho Ho, and look where he is looking with his telescope. Upon doing this, Link will see a Submarine in the distance. Link can then sail to the submarine and defeat the enemies inside to receive the second Bottle. 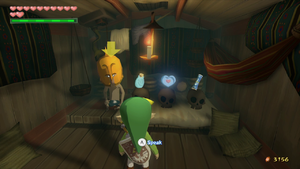 After obtaining the ability to sail anywhere on the Great Sea, head over to Rock Spire Isle (B3). Beedle operates a special type of ship that sails around this isle known as the Rock Spire Shop Ship. It sells special items that aren't available elsewhere, including the third Bottle. The Bottle costs 500 rupees to purchase. 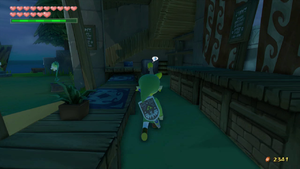 Link sneaking up on Mila

After defeating the Helmaroc King at the Forsaken Fortress, head to Windfall Island (D2) at night. There is a poor girl named Mila and she will tell Link to go away. Head to the stairs nearby and she'll run away. Follow her, but don't get too close or she will see Link when she turns around. When she gets to Zunari's safe, talk to her. Select the first option for every question asked, and she will give Link the fourth and final Bottle.

This red liquid is a basic health potion. A Red Potion will restore all of Link's hearts, and can either be found in dungeons, stores, or from Red ChuChu Jelly. When Link defeats a Red ChuChu, he can collect its Chu Jelly and take it to Doc Bandam on Windfall Island. After giving him five Red ChuChu Jellies he will make the red potion available to buy.

This green liquid is a basic magic potion. It will restore all of Link's magic, and can either be found in dungeons, stores, or from Green ChuChu Jelly. When Link defeats a Green ChuChu, he can collect its Chu Jelly and take it to Doc Bandam on Windfall Island. After giving him five Green ChuChu Jellies he will make the green potion available to buy.

This blue liquid will restore all of Link's life and magic, and can be found in dungeons, stores, or from Blue ChuChu Jelly. Blue ChuChus only exist on 22 different islands across the Great Sea. After collecting 15 Blue ChuChu Jellies, head to Windfall Island and speak with Doc Bandam. After some work, he will make the Blue Potion available to buy. Alternatively, Link can also collect four Boko Baba Seeds after defeating a few Boko Babas. He can then give them to Hollo in the Forest Haven, who will make a Blue Potion.

The Elixir Soup is a potion given to Link by his Grandma on Outset Island. It fully restores Link's health and magic in addition to doubling his attack strength until Link takes any damage. The soup is first available when Link stops on Outset Island in search of Jabun. If Link heals his sick Grandma with a Fairy, she will give Link the Elixir Soup. Link can visit his Grandma any time afterwards and get refills of the soup (as long as Link has a free bottle). The one catch is that Link is only allowed to have one bottle of it at a time. Each bottle of soup has two servings.

These small Fairies are another way to heal Link's health. They can be found all throughout the Great Sea, and once Link finds one he can catch it in a bottle. The fairy can be used when running low on health. Alternatively, the fairy will automatically bring Link back to life when he faints, so proactively using the fairy is not necessary.

This sparkling water can only be found in the Forest Haven. Link can scoop it up into a bottle, and once he leaves the Haven a countdown will begin. After 20 minutes the Forest Water will become normal water. This water is primarily used for bringing trees to life in the Withered Deku Tree sidequest.

Water is, quite simply, water. It can be found in various locations throughout the game. Its main use is to bring Bomb Flowers back to life; this is a required use when attempting to reach Dragon Roost Cavern. In addition, water can be obtained when Forest Water becomes normal water after a 20-minute time limit.

The Forest Firefly is an item that can be obtained just outside Hollo's Forest Potion Shop in the Forest Haven. After Link snatches it into a bottle, he can take it back to Windfall Island and speak with Lenzo. In the original release of The Wind Waker, Lenzo will be amazed and place the Firefly into the Picto Box. This will transform it into the Deluxe Picto Box, which can take colored pictures. In The Wind Waker HD, the Forest Firefly is not necessary as the Deluxe Picto Box is available from the start. Lenzo will still be amazed, however, and will give Link a Joy Pendant.