From Zelda Dungeon Wiki
Jump to navigation Jump to search
Want an adless experience? Log in or Create an account.
Mila 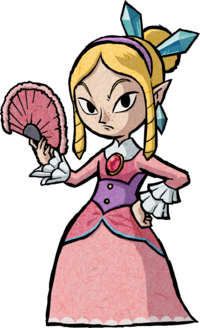 Artwork of Mila while rich

Mila is a character in The Wind Waker.

Mila is one of three girls, along with Aryll and Maggie, to be kidnapped by the Helmaroc King and taken prisoner to the Forsaken Fortress.[1][2] This is due to her possibility of being Princess Zelda because of her Hylian ears.

Before being kidnapped, Mila and her father lived in the Auction House on Windfall Island. She was the richest girl in town.[3] However, her father spent all of his money trying to save her, and they fell into poverty.[4] In order to help her father out, she takes a job at Zunari's Shop.[5] Mila's father praises his daughter for her actions, but he expresses concern over how she always sneaks out at night.[6]

If Link visits Mila at night, she tells him to go away.[7] As soon as Link turns his back, she takes off running. Link can wait for her at Zunari's shop, where she will return to try and steal from the safe. Link sneaks up behinds her and startles her.[8] She quickly defends herself, claiming that she has not stolen anything yet, and begs him to allow her to explain the circumstances of her life that led up to this action.[9][10] She describes how she fell from riches, and complains about Maggie, who has suddenly become wealthy.[11] Finally, she tells herself to stop making silly excuses.[12] Feeling relieved after having let out all of her feelings, she thanks Link.[13][14] In order to show her gratitude, she gives him a Bottle, explaining that she found it on the beach.[15]